inspired by a picture

I got some pictures today from my good friend iggy and one of the pictures in his flikr account brought to mind a poem I had to learn in highschool. I actually had to learn it twice, in fact. One was for the American Writers part of my Humanities class and one for my choir. Choir? Yep choir as it had been put to music and we performed it in one of our concerts. 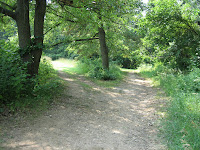 The Road Not Taken
by Robert Frost

Two roads diverged in a yellow wood,
And sorry I could not travel both
And be one traveler, long I stood
And looked down one as far as I could
To where it bent in the undergrowth;
Then took the other, as just as fair,
And having perhaps the better claim,
Because it was grassy and wanted wear;
Though as for that the passing there
Had worn them really about the same,
And both that morning equally lay
In leaves no step had trodden black.
Oh, I kept the first for another day!
Yet knowing how way leads on to way,
I doubted if I should ever come back.
I shall be telling this with a sigh
Somewhere ages and ages hence:
Two roads diverged in a wood, and I --
I took the one less traveled by,
And that has made all the difference.
posted at 3/31/2008 02:47:00 PM

Thats a magnificent picture. I am glad you enjoyed the ones I sent you. :)

I've never read the complete poem so I appreciated the chance to do.

I'm horrible at memorizing things. Useless trivia is a piece of cake (the more useless the better), but something like this would take me 10-15 years to get down pat, if I ever even succeded.

Thanks iggy. Im terrible at it too...unless it's music. Then I do fine. The American writers came before the choir so it gave me a leg up on learning the song because I knew most of the words at that point. After learning it in choir I then used it as one of my Public Speaking assignments (we had to find a poem and memorize it to say infront of the class). Of course by then I couldnt say it with a straight voice and had to fight to not sing it. Man I hated that class. It was an elective so it wasnt really needed to graduate but I felt it would be good to help me get over my shyness. Yeah right. I STILL cant speak in front of a group unless Im acting (and cant see them for the most part) or I've been dippin into the liquid courage.

That's always been one of my favorite poems.

I've read the poem on more than one occassion before, but then I'm one of those people who'll read poetry in my free time because I enjoy it (besides, it's good to read other poems when you write your own). I've always thought that was a great poem, so thanks for sharing it :)

Yep, nice poem and great pic to go along with it.

(i think i'm finally caught up with your blogs now, Styxie)

Love that poem... enjoyed the blog.

Thanks punkn, Chicago and Tori!