Holy cow, we got another decent snowstorm. If I didn't know any better, I'd think I was back in New York again. The area averages 8" of snowfall in a winter season. As of December's snowfall, we'd already TRIPLED that. We got another 15-18 inches here (some people got more like 20,25, 30 and 35 inches in this storm). Another like this and we might catch up to my NYBro (who told me the other day that they've had a mere 70" this year). I've got the pix in my Flickr account for those that really want to see more, but I'm going to stick a few in the entry that haven't been posted to that account (nor Facebook) yet.

Yes, the snowbunny is very very happy. I spent a good amount of time mid-week til Friday hoping for a good dumping and doing a virtual snowdance in Facebook (by the way, I think I've finally convinced the 1000+ acquaintences over there that I'm sufficiently certifiable). One of my nearest and dearest (who actually lives in state and is in an easy driving distance.... well easy drive sans snow.. from me) has threatened to cut my limbs off. I think she's tired of the snow already.

Anyhow, hubby and I went out to start bailing the truck out so it can be used around midweek (not that we really NEED to shop but a few essentials will need picking up around Wedndesday or so). Everyone in the cul de sac was out shoveling the sidewalks and generally pitching in to get the vehicular transports dug out. It was a very nice feeling....until I noticed some that live at the halfway mark of the cul de sac not shoveling the snow into the yards but dumping it in the middle of the parkinglot! Great, those that live closest to the street ~might~ manage to get out in the next day or so, but thanks to these idiots (who I must guess are assuming the plow will be back to do our lot by Monday *inserts eyeroll*) I doubt anyone living in the dead end part of our area (like us and the cabbies who live 2 doors down and the guy across the sidewalk who owns his own business) will get out much before mid-week. I guess it could be worse. The dude parked 2 spots to our left (in the last spot of the lot) won't be getting out much before July because the plowed snow ends up piled right in front of that particular spot (any farther would put all the snow right on the sidewalk and that pile...well it's a good 6 foot tall...no one's gonna wanna shovel that... plus I'm sure the home association frowns on it, not to mention it's dangerous for the people living in the area). Thanks to the plow I doubt we're going to have any mail pick up until much before July either.... 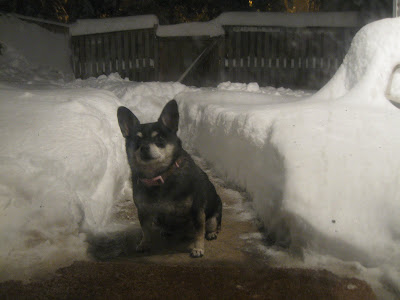 Katy.... sitting near the patio door. Doesn't look like alot of snow, but trust me...she's in the shallow end of the yard! Man, she's really gotta lose weight... but that's fodder for another post. 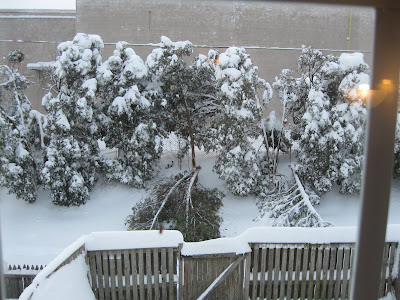 The snow was so bad that it's wrecked the treeline in the back. There's damage like that all the way the length of the fence. Every time I looked out, another 2-3 trees were down. That one in the center? I HEARD that one go down. There was a loud pop and then next thing we knew *crash*. If it had been another 2-3 feet taller or so, it would have landed on our fence. Not that really would bother me as it's the landlord's responsibility to fix stuff like that. But still, I'd rather they didn't have to do too many repairs while we're here. 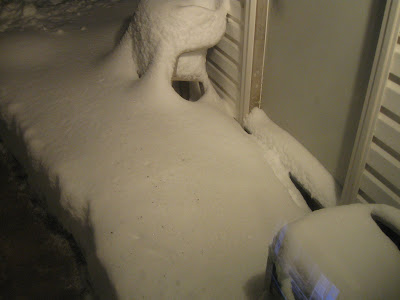 Thank goodness I did the laundry before the storm rolled in. That's the door to the shed where the dryer is. I think I'll have to get that bailed out tomorrow, just in case.
PS.... the banner? Yeah that's me...starting to make a snowangel ~smiles~
PSS... not to say that I'm an awesome snowdancer but they're saying we are going to get a bit more snow on Tuesday and possibly Wednesday as well! Iggy, you might wanna bundle up...
posted at 2/07/2010 06:15:00 AM

Im so happy you got you some snow, I love snow but I really do feel bad for those that really got it hard and all those people who have lost their power, you have fun and I like your snow angel :o)

I just don't feel the same joy you're feeling when it comes to snow!!!

Love to look at the beauty of snow...but hate to deal with getting out. We are enjoying looking at it from afar. Our families up there in VA/Balto/Pa area are safe and are dug out...so all is well. Thank God. There is always the worry of loss of electricity when the snow is so heavy.

I thought I recognized that person up there laying in the snow. Been a long time since I was crazy enough to do that. LOL

I've been waiting for this post. Enjoy this snow! Glad you don't live next door to me cuz I'd be beating you up for that fancy snow dance footwork :)

Yeah, there are some people who might be ticked right about now, so you might want to stay close to home, lol!

I love the header picture though..

you sure did get it.
last year the snow ruined a bunch of our shrubs. But we've had little spits of snow here and there. I think you got it all.

have fun. don't have a heart attack shoveling.

Glad you got some decent snow too. Seems like everyone got a decent snow fall this year. :)

Burrr! It looks like a great time to me - but then again, I live in Florida, easy for me to say! Stay warm!

Glad all that snow went somewhere it will be appreciated. LOVE the picture of you making a snow angel! I'll leave extra since Iggy jipped ya.