I've been meaning to sit down and get this entry done, but the last couple days I havent really felt like writing. It isnt that I havent had anything to write about, for I certainly have plenty to say. I just havent put my finger on it yet. Im sure it'll come to me eventually.

Thursday was a busy day. Thankfully hubby didnt have to work Wednesday so we could get our bodies at least somewhat used to being up at an AM hour. Good thing because my first appointment for the day was at 10:45am. The appointment was at the obgyn with Dr Bascom. She seems to be a nice enough lady and is highly recommended by my PCP. After a nice chat she told me what all we were going to do in an effort to get a baby into our lives. I wont go into details here as they really are a whole hell of alot of tmi. I mean you have to expect it will be considering the dr and why Im going. I think Im going to start yet another blogspot through this account for it. Ive got some ideas on decor for the page, now I just need a nice name.

Anyhow, my second appointment for the day was my PT at 2pm. I gave Joey the whatfor for making me feel like hell the last week. He repeated that he TOLD me he had gotten aggressive. This session wasnt so bad but I think he was taking it easy on me because he KNEW I was going out of town on Friday for my birthday. It also could be that he doesnt feel that I need the therapy for much longer. I still get some pain, mostly when I twist into or lean into that side, but it's not like it was. At least it doesnt hurt when I sit or turn to my left. He thinks there will only need to be another 1-2 sessions. This is a good thing. I still need to do as the first PT lady told me and get some new "overtheshoulderboulderholders" with some better support for my back. That one recommended something with a racing back and wide straps....plus to invest in a sportsbra for around the house as it'll help the rest of my back. I have a feeling I'll need to keep doing these exercises for a while though just to keep it all limber back there. Of course, that may help out that subject in the precious paragraph ;). Ok ok....so...I got a friggin one track mind! Can I blame it on male hormones? *laffz* 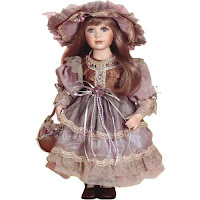 Mom and Daddy left me a present in my email in the form of an Amazon gift certificate. You can be sure I was off shopping as soon as possible. Surprise surprise...I didnt buy any music with it! LOL I figured since it was a gift from Mom n Daddy, then it should be something off my list that Mom would have picked out for me so I headed straight for the porcelain dollies. Ok, yeah so, I collect dolls...I also like musical carousel horses. Yes, there is a girly side to me every now n then :P~~. I have expensive tastes in what I like too, but I settle for the less expensive stuff because it's just as pretty. My most expensive piece is a Geppeddo (the company is now out of business...sucks because their stuff is "da bomb") retailling at around $35. The picture to the right is the one I picked out as their gift to me. With their gift certificate, and the little extra in my account there, we only had to pay a bit over $6 for her....less than the $7 ship charge. Gotta love that. Hmm I wonder if Paradise Galleries has anything new....maybe I'll go look later and see if Linda Mason, Linda Hanson or that Tom F have anything on sale.....

Friday we got up and going. I had a few chores to do and we wanted to wait on the mail to show up before we left. I had a chance to to check my emails, blogs and MySpace between tasks and remembered to drop thankyou notes to those who left something nice in the areas I have online. We packed up and headed to Tyler. Tyler is about a 2 hour drive and completely do-able with the seive I call my bladder (more than 2 hours means pitstops along the way). We got ourselves to the Motel 6 in town and then went to supper at the Denny's next door. Servie was a tad slower than I care to have for a restaurant that wasnt overly busy but since there were only 2 waitresses working I couldnt complain too much. After supper we hung around the hotel for a bit and just rested. Around 930pm or so we left for Clicks. Clicks is a billiards hall / bar that hosts bands and supports local music. Some of the bigger names out there started in places such as this so it's rather exciting to be somewhere where the next best band just may make their major breakthrough. After we got in, I immediately started looking for my friend Dane. I figured it should be easy...just find the cute bald dude (kinda like a Where's Waldo game...without the striped hat). Yeah right, my luck there were at least 4 bald guys in the place! Thankfully he came up to get something to drink from the bar. Yet again, he was gracious enough to spend 15-20 minutes sitting around talking with us. Im so damn glad to see that it wasnt a one time deal. Plus I got a hug as a greeting this time....awesome. They were running a little later than planned tonight. I guess the plan was to hit the stage around 1030pm, at least that's what Dane had said in his message to me. Oh well. The show was well worth it. I had had a good time at my first show last year and this year I wasnt dissappointed in the slightest. I think there were some new songs in there as many I didnt recognize (*makes note to get the live cd*). It's hard though in a live performance. Oftentimes they're half way through a song before I realize I recognize it. Not just Squint, but any band in general. Maybe it's just because Im getting older. Who knows. 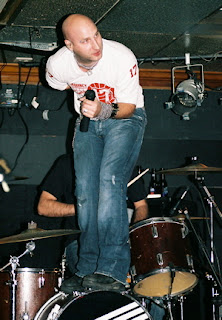 Im hoping Dane's (that's him on the left) feeling better today after that spill he took. From what he said later the drumset that he normally jumps on was set up just a bit higher than normal. The pic above is from another concert but you can see what I mean about him getting up on it. He'd made mention of it but forgot when he turned to make his approach. Poor guy tripped and flew over the drumset and onto the cymbals located on the drummer's right hand side. In the process, he also tipped over the pitcher of water he had up there and got a wet ass. What a professional to just keep going and laugh it all off! Thankfully, there werent any major damages to him. It could have been worse, an earring or eyebrow ring could have gotten caught and ripped out. The worst he probably got was some bruises and a few cuts because as he said "You cant land on a heap of metal and not expect to get scratched" He did manage to make the leap a couple other times successfully later in the show, although he nearly put his head through the ceiling once (again refer to pic to see how low the ceiling is). From what he said he was hopped up on steroid shots from the day before....he'd gotten majorly stung by wasps while cleaning his yard and had to go to the hospital. The shots were to help him from being in pain as many muscles were hurting terribly. I hope Saturday's show in Shreveport was easier for him.

Well, I think Im going to scoot. I still need to do an entry for the Padded Room today (maybe) and I think I'll start working the page for that other section...or at least getting some ideas together. Maybe I'll just go out and spend time with my babe. He came home sick today. I guess he was in pain at work and went straight to the dr's office. Looks like some kidney stones are trying to pass. They say if they arent out by Wednesday that he'll be needing to go in for some scans. They took blood and his sugar's up as well. He's on the sofa right now with his three meds lined up...one for pain, one for nausea and one for his sugar.
posted at 8/06/2007 02:03:00 PM

Glad to hear you had a great time on your birthday. It's nice to get away from things once in awhile...doubly nice when it's your birthday.

I understand that the stones are quite painful. If he's complaining that's enough to confirm it for me. A friend of mine had them as well many years ago and they were enough to slow her down for several days (as opposed to the Energizer Bunny that she usually was).

Having a baby is nothing compared to passing a kidney stone. My husband has one kidney full of them. He is going into the hospital next wednesday to have Ultrasonic lithotripsy. Ultrasonic lithotripsy uses high frequency sound waves delivered through an electronic probe inserted into the ureter to break up the kidney stone. The fragments are passed by the patient or removed surgically. His fragments will be removed surgically. The Urologist told him yesterday he has two large size stones just outside the kidney. I hope he can last till next Wednesday. Good luck to your husband. I hope he doesn't get a full blown attack.

Good Lord no, we dont want a full blown attack of anything! He says it feels like it's moving on down today. He's been really good taking his meds without me nagging him. Actually it's quite worrisome as well because if he's doing that willingly then it hurts like hell. Im hoping it passes sometime tonight but I have a hunch he'll be in for a scan tomorrow to see what's going on. He's missed 2 days of work and getting antsy here at home.