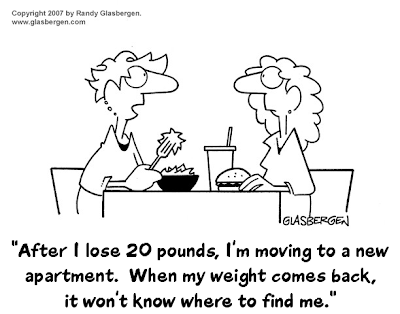 Two women chatting over lunch. One is eating a salad and the other a burger and a drink. The one eating the salad says " After I lose 20 pounds, I'm moving to a new apartment. When my weight comes back, it won't know where to find me."

A woman, standing on a scale and pointing a gun at it. The caption reads "Fed up with how her diet is going, Charlene takes a more serious aim at her target weight." 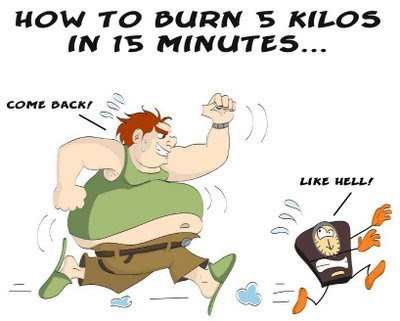 How to burn 5 kilos in 15 minutes... Comic shows a fat man chasing a set of bathroom scales while yelling "Come back!" to which the scales are yelling "Like Hell!"
Ok, now that you've had a good laugh....the good news is that according to my OFFICIAL weigh in (meaning not my scale but the one at the dietitian's office, a weight that will go into my medical file) I'm 268.8 pounds. When I started doing something about my weight in August, I was 298 pounds. You read that right....a loss of nearly 30 pounds in 5 months' time. If I figured correctly, I lost about 10 pounds in the 6 weeks between those two appointments. This includes the trip that I complained about in December where I had breakfast (against my will, mind you) at Hardee's 3 of the 4 mornings (I gained at least 4 pounds just because of that AND because my bike wasnt there so of course I DIDNT exercise)....so I had to lose that before I could make any steps forward. The BMI has gone from over 49% to a much nicer 45%...it can only go down from there. Oh...and in another 40 pounds, I'll be merely obese and not morbidly obese. YAY me! Only another 120 pounds and I'll be down to my goal weight (putting me just on the "normal" side of the BMI charts). I cant wait.
Last night's ride:
Calories burned: 364.8
trip miles: 10.41
ave mph: 20.82
Oh...and the last time I was in to the dietitian's office, I'd brought a picture of what amounts to a normal meal for me now adays to show her the changes I made. This trip in I noticed that she'd had it tacked up to her wall and found out she uses it as an example to her other patients! I need to get a new shot for her with the additional tweaks (Ive changed breads and yogurts for ones that are even better for me plus added an apple a day). Best yet, Im not due back to see her for AT LEAST 3 months...unless I "fall off the wagon" and need a "kick in the tail"...then Im to come back right away.
posted at 1/29/2009 03:07:00 PM

You're doing great, Styxie. It's really nice to hear how well you're doing. And I do believe you're on the right track in reaching your goal. Hang in there. *hugs*

Loved the comics...especially the one with the gun pointed at the scales. LOL

Keep up the good work!

Congratulations! That is quite an accomplishment.

I love the woman about to shoot her scale BTW!

Great job! Keep it up and soon you will be where you want to be :-)

I am so proud of you! Keep up the good work.

Those comics are great! I love the one with the cat thinking it's emaciated and needs to be fed, lol.

WAY TO GO!!!! You are doing so great! What an inspiration!

Good for you! Congrats woman!

PS I love the first comic with the fat cat! I've got two fat kitties at home who act like they are starving ALL the time!

YOU GO GIRL!!!! You are amazing! Keep up the fantastic work!

I think I need to take sharper aim at my weight...just like the gal in your cartoon! BTW, 2 things: Don't forget today's Silly Sunday Sweepstakes. AND, please come over to my place to vote for the Hubz, Mr. Fairway. Thanks!

YOU ROCK! WAY TO GO!

Yes, we know we're crazy - it's a necessary thing to live here!

Yes, if Bella wins the dress you'll see oodles of pictures of her in it! You know, perhaps VOTES for The Bella would count??? Jus' sayin'.

I don't need a card shop. I just need people to volunteer to receive them!! (*hint*)

Your comment about your little swearing mishap made me laugh! And that adult was right though, it is what it is isn't it?