Does anyone remember how many cubits it was supposed to be?? 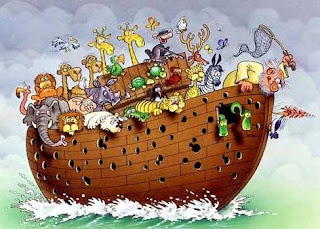 One more day like today and it'll be too late to build that ark. I woke up to nasty thunder, lightnin and a deluge like you wouldnt believe. My Sunday paper's soaked clear through and hubby's going to need to bring one home now because it's completely unreadable as it is. There's so much water out there the dog's refusing to even step foot on the patio. She's gonna be one unhappy pooch when I get outta my chair and head for the kitchen the next time as Im going to carry her out , drop her in the yard and make her go potty (as long as she just goes through the motions and fakes it I'll be happy). Maybe she wont give me a hassle though as I see the sun fighting to come out. EWwww...that means it'll be humid later....BAH!

Well I did it. Thanks to the comment left by Chicagolady, I actually grew a backbone and went into her blog and left her a note. It was the first one in that entry so it couldnt have been missed. I just hope it didnt cause her any grief with the others.

I also went and dug up an old email and found at least an email account for the other that had a loss in her life. I sent a condolences ecard for her and her hubby. I bet it was a great shock to see it sitting in the inbox yesterday morning. She did manage to send me a 2 word email to say thank you. I cant ask for more than that with the way I treated her. At least she thought to send it to me (unlike the other who sat and sent her thanks for her snailmail card to my TXSis instead...yes Im a tad bitter there).

Hubby and I have dr appointments this coming Friday. I've been dreading this because I managed to gain 5 pounds while on that 4 day trip to NY. It's such a fight to try and keep that weight off. Well I got on the scale today and it looks like I dropped that 5 pounds back off so I should be breaking close to even on Friday. I've gotta remember to sit down and make a list of what all I need the dr to check on the two of us while we're in. I know it's about time for my Well Woman stuff but I need to have my blood rechecked as it's been more than a year and while we're taking bodily fluids we may as well check my fertility. Yeah hubby and I have been talking babies and I'd like to know NOW if I can still have them rather than find out later after trying for months and months. If it looks like I cant have them because something in my body then Im considering having the plumbing yanked. No sense having all that *bleah* and pain if I cant have them. I'll also need to see about therapy as I have a bad feeling if I cant Im headed straight for a total meltdown.

Not much else going on today....gotta remember to call daddy today for Father's Day. He's 2 hours behind us though so Im going to wait another hour to be sure he's up and awake. I left him a pressy on his MySpace though so maybe he'll get that before I call. I know for sure his card didnt show yet as I had waited til this week to get them instead of 2 weeks before the holiday which is my usual. Damn Im such a bad child. No wait...I was accused of being HUMAN the other day so maybe that's it. Here all this time I thought I was a Reubenesque Venusian....

No one has said a word yet, so I guess everything is cool so far. Of course, if they're reading this, they may just decide to comment, lol

Am glad no one's hassled you about it. That was my biggest worry. Only heard from one via email letting me know they read my blog but they mentioned reading it through that link on your page which means they've been going to the 360.So I dont know if they've even found here yet. Not that it matters as most of what I put here is copied over there. I'll be responding to the email later on today.