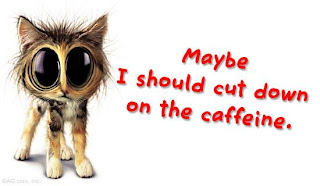 We've got another grey, dreary day here in Garland. Im sitting here in my office at the computer and my body's wondering why the HELL Im vertical at this hour. Most of my friends are probably looking at the time and wondering the same thing as Im notoriously afternoon type person. Mornings and me, well we just dont see eye to bleary eye. I dont know why the heck Im up. Days like this make me so sleepy and I find getting up really rough....especially now that Im mostly caffeine free (just one of the changes I made after my surgery in November..the other being reducing the sugar intake). It looks like we're gonna get more rain today. I have some mixed feelings on this because the ground really can use it and it also washes a good deal of the pollen out of the air which makes breathing easier as my allergies wont be kicked up so much from the myrtles which decided to bloom right on the heels of the magnolias dying off. Looks like there's no real break pollenwise this year. The rain, however, washes it all outta the air but then we end up with the nasty mold spores that kick up because of all the moisture. *BAH*

Called and talked to daddy for a bit yesterday. Not much going on out that way. Seems we're about 20-25 degrees cooler and are having more rain than them. He requested we get one of those big movie fans they use on set and blow some of this out their way. He's been to his surgeon again for his shoulder. For those of you just getting to know me...he was in an accident around the time I was in the hospital for my gall bladder (me, then daddy and then gramma dying in January...I guess that makes 3 for my family and I dont need to worry for this year right?). I guess he's holding steady. Not ready for work yet (though he desperately wants to go) but better than he had been. They are working at paying things off so they can move east sometime in the next few years.
Hubby forwarded an email from work. Looks like one of his workmates has put in his resignation. I guess he had an offer from a company called TriQuint. I checked their site out and they had lots of posting for openings in the Dallas plant. The good thing is that they also have a plant in High Point , NC. If he was to apply for a position there it'd put us 4-5 hrs from his folks, 7-8 hrs from my brother and 2-3 hrs from my SCSis. Unfortunately, they only have one opening there right now and hubby doesnt have the training for it. He is, however, considering going back to school for it...it'd only take 2-3 yrs to get the degree needed. It wouldnt help us out now, but would look good on a resume later. He was telling me that the Dallas plant for TriQuint is in an old TI building. I told him...go to the company and have them buy the plant you're in, then we wont have to worry about moving! LOL

Got an email yesterday I wasnt really expecting. Let me rephrase that...I was half not expecting but knowing this person I should have known I'd get one. I really need to get it answered sometime today. It was very nice to hear from her again. I realize that things will more than likely not be the same as they were because of my own stupidity, and I dont really expect them to be as such, but it's a start.
posted at 6/18/2007 10:17:00 AM

Ok, I can't really tell what time you posted here based on your time format. What is 7.17.PD?

Oh yeah, and I heard about all the rain you got down there, hope you haven't floated away, and didn't lose electricity.

Hmmm...gotta be something I got checked...will look into it today. Would be nice to know eh? Im sure it was before noon though as I was actually vertical by 7am....

Figured it out. Looks like I forgot to format it. You'd think the date and language would carry over from blog to blog on the same damn account. Ahh well.What they need to do is put that stuff with the profile info as that DOES carry over.