BRRRRRRR!, PetSmart, and Bo of course....

We had a rainstorm go through this morning and it's been gray and dreary ..not a lick of sun. One of those days when you just want to stay curled under the comforter all day... and Brrrrrrrrr it's gotten cold out. I know my friends are all pretty much going to tell me to shut my damn mouth because invaribly (sp?) it's colder where they're at. We've got 50 degrees today and the wind's been whipping for the last day or so. Oh yeah, Im sure my friends have colder temps but please remember it was 80 degrees out not just 2-3 days ago and in the 90's ~just~ last week. The floor's cold enough I actually had to put slippers on today and I HATE having anything on my feet. This keeps up I may have to put some pants on too (to clarify things for the pervs out there I wear shorts around the house...get ya minds outta the gutters). Man I wish my tea would hurry the hell up and get brewed. I wonder if I have enough chocolate syrup to make hot cocoa with....

I went through my emails in my roadrunner account yesterday and sent a thank you letter to the gal from the homeoffices of PetSmart because she's been so damn helpful forwarding stuff to the store I was trying to get hired at. I guess this morning she sent out the info again to make sure someone at least got back to me on the application which was really nice of her. I got a call from the store manager and they dont have anything at this point as they'd just hired 2 and had 2 more out for drug testing. He was wondering what the problem was with the website and I told him and he said he'd have it looked at..thanks for letting them know. This particular store does not do overnight stockers (that's not what I was led to believe on the app online....) but that some of the stores do. He said that although he was fully staffed that you never know when someone was going to want a tranfer or quit. He also pointed out that who knows by next week they may need 2-3 seasonal helpers too. I told him it was ok to put my info on the back burner and give me a jingle if anything opened up. If I was still unemployed at that point maybe we could get something to work. Im not overly dissappointed with this one, just a little...definitely more than the other store for sure. I still have a few leads out and I have 4 more in my email inbox that I can apply to. They're ones that I had goaled out to apply to this week and I found that they had online apps I could fill out which is what I'll be doing after I finish my blog. Maybe this week? I know what everyone is going to say..."I hope you find something you'll be happy at"... to be honest Im not really sure Im going to be happy anywhere as it wasnt exactly my choice to go 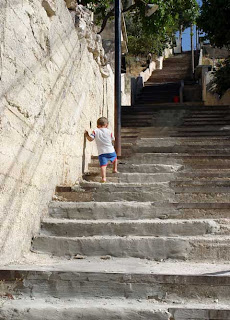 back into the work force. If it had been my choice, then things would be different. Right now, Im still very uneasy and worried about it. Im beginning to think that when we got me on insurance that I should have put myself in therapy in an effort to get ready for this possibility. I just know once I get there and get my work legs back under me I more than likely will be fine. It's just taking those first steps and doing for myself. I know...baby steps, one at a time. It still feels like a long road though. I was in my MySpace today and a couple of my Bo-addicted friends had this link in their blogs. Looks like you can hear all of Bo's cd (complete songs, not samples, *WHOOOOOOT* and the whole cd....sweeeeeeeeeet) today. I give you one guess what I was listening to while reading my blogs. I figured while I was at it I'd listen to the Carrie Underwood one too. I mean she did surprise the crap outta me with her first cd. It's on my Amazon wish list so maybe I'll get lucky and it'll turn up for Christmas. ANYHOW, I give you one guess which one I'll be listening to the rest of the day though and where my money is headed....... If you like ZZTop, Lynard Skynyrd, The Eagles or any music like that...you'll LOVE Bo's cd. Ohhh and that reminds me...the Eagles new cd is out next week. Cant wait for that one either.
posted at 10/22/2007 02:33:00 PM

I have faith in you, that you will make it work. I know it wasn't your decision to go back to work, but you'll make the best of the situation. I hope you find something you'll be happy at, or at least won't hate. Baby steps are good, eventually you do get where you want to go, too.

chicagolady said what I was thinking. *hugs*

It was mid-70s here today but the weather is in for a big change tonight. Not looking forward to it at all. :(

Thank you to both of you.

Yeah Alice, the cold was headed to my northeast so there isnt any surprise if it's headed to you. With the wind whipping like it is, it should be there in no time flat. Spent the day fully clothed today....pants, slippers the whole kit n kaboodle.