cd,floss, a birthday on the horizon, flu shots and marbles 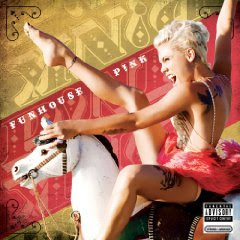 As you can see by the decor I have up, I'm extremely excited about a certain cd that's coming out very soon. I cant tell you how much Im anticipating this cd. If it's anything like his pre-Idol stuff, it's going to be one friggin awesome cd. The only thing that's going to manage to get me through until his release date is the fact P!nk is releasing a new album this week. I've listened to the preview of this cd several times already and I cant wait to add it to my collection.
http://www.vh1.com/artists/az/pink/2339248/album.jhtml

The first song on the album is the one getting airtime now. 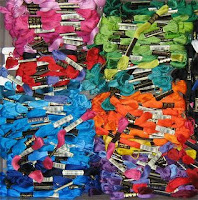 Moore's Craft store. Knowing how much my mom loves to do embroidery, I dropped her a line letting her know they had the flosses on sale at 8/$1...which is an AWESOME price for them because a normal sale price is 4/$1. The sale was for only two days though, so she'd have to hurry to get them. She wrote back to say that she doesnt have an AC Moore's nearby and was rather bummed about it because it's a ~REALLY~ good deal. A follow-up email asked if I'd mind picking some up for her if she'd send a list of colors along...she'd be happy to pay the cost of the floss and shipping. Of course I didnt mind, it gave me a real good excuse to go and pick up some for myself as well....not as though I really needed them but it's good to have on hand in case I feel like stitching. I walked out of AC Moore's with 90 some odd skeins of floss for a bit over $12. Cant argue with that.

I managed to get all but a half dozen or so that she needed. I decided the next day to go to WalMart and see about getting the rest as WalMart's always been the least expensive around. Imagine my surprise that they no longer carry embroidery flosses. Say WHAT???!!!?? So I ended up going to Michael's instead and getting the rest of the colors needed. While there, I decided on picking up a couple items to help fill the shipping box out somewhat. I decided on a set of pillowcases that has a pattern on it so you can embroider flowers on them. There were several sets, but the one set that caught my eye was one that was mostly done in the lazy-daisy stitch. I knew that was a stitch she liked to do best because the piece went fast. I also picked her up some bobbin labeling stickers for her spools of floss. Well I get them shipped off but just tell her the floss is on the way...I made no mention of the "I Love You" gifts I enclosed. I figure turn about's fair play....she always does it to me. This Friday I get an email from her and it starts out:

"Package arrived in fine shape this morning. Something funny must have been
going on during the trip out. The floss gave birth to a set of pillow cases and
bobbin labels. STRANGE!!!"

I love her sense of humor.

Got an email from my SIL in Indiana Saturday night letting me know my niece's birthday card showed up. Thank goodness. I always worry because I always enclose sometime special in the cards. Her kids love getting those little special treats because it always means a trip to Toys R Us which I guess is a rarity in that family. She also let me know that what I had planned for the Christmas presents was a great idea (personalized story books)...especially since it is so darned hard finding ANYTHING with the girl's name on it anywhere. It's as bad or worse than finding personalized stuff for myself. Oh, mine isnt so bad now a days...but when I was a kid it was considered a very rare name.

I was in reading my comics, as per usual and saw this one:

Which reminds me that we arrived into Scorpio as of Friday....which means someone's birthday is coming up in very very short order. Who knows how to bake a traffic cone shaped cake? Remember...it needs to be frosted in OCHA orange.

Has everyone got their flu shots yet? I got mine on Friday. Damn did it ever hurt. I guess it beats the alternative: 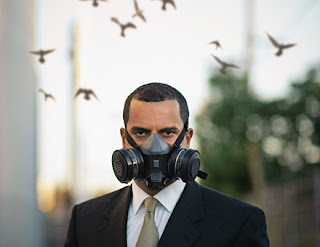 I've got something else to share but it can wait until I get up later or maybe sometime the next day. I've got more than enough photos in here as it is. However, before I sign out...I found something in Google that may be interesting. We all know that at times our darling Marmie tends to act like she's lost her marbles (kinda reminds me of Tootles the pirate) ......well here ya are dah'lin...I found them: 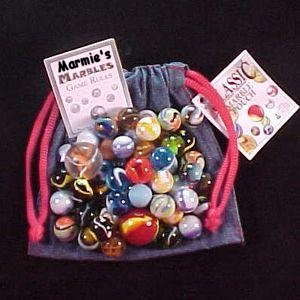 No flu shot for me thank you... I don't seem to catch that sort of thing for which I'm very grateful.

Marmite's marbles are a very nice assortment - I wonder if she got them on eBay?

No cake for me, thank you.

Next time you're browsing the net, can you see if my marbles are about too? Kelly pointed out the other day that I'd lost mine. It must be a common thing to happen to British people, 'cause I know my Mam nd Dad lost theirs AGES ago (they've given up looking now). :)

That sounds like a great idea for the cake. Can you buy orange food colouring? Or would you have to make the orange yourself?

I need to get that darn flu shot. As a cancer survivor and lupusdupus person, they pretty much insist. Sending that care package to your mom was very sweet. Can't tell em you love em often enough...

I don't get the flu, have never had the flu, and am not considered to be in the "at risk" category, so there's no point in getting one.

I'll be picking up Pink's cd this week too. Sounds like it should be a good one. Makes me wish I'd gotten her last one.

I've been wondering what "floss" is (besides the kind you use on your teeth), but now that I know it's embroidery floss, I have a better idea now.

I'm sure your mom loved the extra gifts you sent. Such a nice daughter you are.

I saw that comic on Friday I think, I've taken to reading all the comics listed on yahoo, to help pass the time at work. LOL

Such pretty marbles Marmie has. If mine were that nice looking, I'd never lose them. Wonder if she's interested in trading?

They always make me get that shot too punkn. Then again, Im prone to getting sick easily.

I checked for the nicest marbles in a heavy-duty bag for Marmy...especially with those little nippers around all the time. Last thing we need is the bag breaking and her losing them again. I'll have to look for yours Tori. If I was aware you and your folks (and I suspect Kelly as well too) had lost yours too, I would have spent time seeking them out.

Nope you cant punkn....not enough at all.

Considering that Im watching my weight, I think we need 2 cakes...one regular for some and one sugar free for those of us that really shouldnt be having it. The Jello is a good idea too.

Just no cake iggy? No alternatives of what you'd rather have? Or you're not gonna be telling which date it is. Oh dear you are going to make this difficult for me arent you....that's ok...I can figure something else out.....

I have several songs from the new Pink cd. I was surprised at how nice some of them are. I streamed three of them Friday night in fact.

I've never had a flu shot and don't plan on getting one this year. (I hope I don't get the flu now that I've said that)