My biking speed is increasing and I've noticed that when I'm really sidetracked, it goes much much faster. Case in point, yesterday my SCSis called to check on me. Lately the calls have gotten farther and fewer in between as she's gotten busier with work. The calls have gotten shorter and shorter. Anyone who remembers, she's the one that likes to keep me on the phone for at least an hour or more. Well the last time she called was about a week ago...I cant remember how long she kept me then but she really needed to talk. This week, it was beginning to feel like it was going to be a marathon call so I climbed on my bike. I tried to keep it to a reasonable pace but we got talking about something that really had my blood pumping. When I get excited about a topic, my blood pressure goes up and I get more animated. Usually, I talk with my hands (you can thank being married to the Italians for more than 10 years and the fact that Im highstrung for that)...well it looks like the legs are pretty much the same because before I knew it, I was really cruising and huffin and puffin in her ear! She got worried as she had no clue what was going on....I hadnt gotten around to telling her about the bike yet. *laffz* I dunno who was more excited about me on the bike...her or me. Anyhow next thing I know, I glance down and Im .oO(how'd iggy put it? ah ya) "burnin up the road" cruisin at 21-22 mph!!! Holy crap! She kept me on the phone until 20 minutes into my ride and only hung up when it was blatantly obvious I couldnt keep up a conversation any longer. That was my best ride so far outta these last 7 days with today being the second best.

Today, I really had set out to do a nice comfortable pace as a break but as you can see from my stats up there, my body chose otherwise. I expect within a week or less, I'll need to crank the tension up on the bike a bit. I may wait til the end of the month though. I'd really like to wait until Im on a new month's spreadsheet before I make any changes. Oh wait....next week IS the end of the month. Damn, well that came fast! 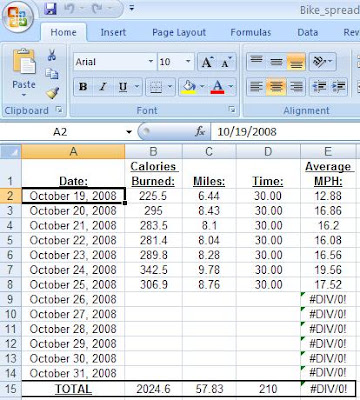 This is a screen shot of the spreadsheet hubby made for me. After Im done riding, I log everything but the average mph in...there's a formula that figures that out for me.
posted at 10/25/2008 11:59:00 PM

Hmm, something to get your blood pumping...David Cook maybe? LOL

WTG on all the miles and calories burned! I noticed the formula was set because of the #DIV/0!, I've seen that a time or two.

*laffz* That would be a good start. Or maybe some of our Thursday eye candy...yeah that'd do it nicely!!

Yep..the last box in that column is going to figure out the average mph for the whole month. Or in this case, since I started. This way I can see if there's an improvement from month to month as well.

WTG on all the time you're spending on the bike. And good luck with keeping it up. :)

Good luck with the biking!