Now that it's gotten warmer out, the neighborhood Charlie has been making his rounds and visiting all the yards. This one was shot from across the neigbor's yard. He perched himself up there and I swear he was posing for me (make sure you get my good side!). The yard, I would guess, is about 15-20' across from where I was standing and this little sweetie was sitting. I had my camera zoomed as far as I could to get this shot and still had to crop out alot of the extra junk. 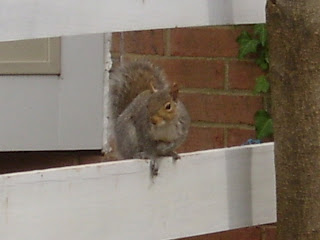 I came around the corner of the yard, to close the distance... I even said please... for a nice tight close up and the cheeky little bugger decided to moon me instead (hey iggy, does that tail look familiar? LOL). Distance...about 10'. 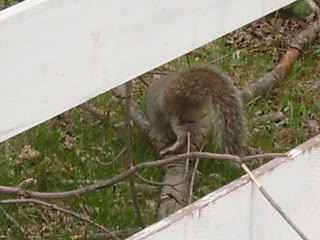 I've finally decided and bought the camera I liked best. She's a Canon Power Shot A590 and a real beauty. I took her picture with the old Samsung...sorry that it's blurry. My Samsung is a 4MP and the Canon is an 8MP. Hot day-yum. My Samsung was beginning to take several seconds to warm up and I found it frustrating because I'd have alot of those Itshouldabeenakodakmoments (complete with swearing in frustration at the camera). Plus the lag she had between the shutter clicking, the preview to come up and then prep for the next picture was unreal. My new Canon fires right up and is ready in less than a fraction of a second and the lag-time between pix is ~maybe~ a second or less. I'm totally in LOVE with my new toy. 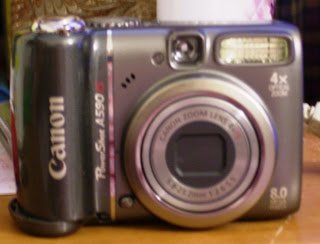 While I was out on the 16th of this month, I played with my new toy. I was standing at the end of my walk and on the public sidewalk when I saw this red blur go flashing by so I turned, zoomed, aimed and clicked in one smooth movement. That cardinal wasn't sitting still for much of anything. He needs to take some lessons from the squirrel. Ok, so I can't move ~quite~ as fast as I want to, but it was still a decent shot. The Samsung would NEVER have gotten a shot even THIS good. 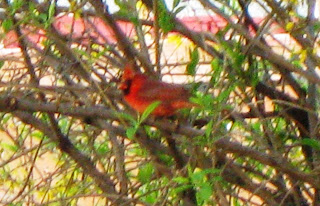 Then there was this beautiful robin in the tree on their property. Its pic? Im not even zoomed all the way in. That bird is a good 20' or more away from me. All I did with this picture was crop it down some...that's it. 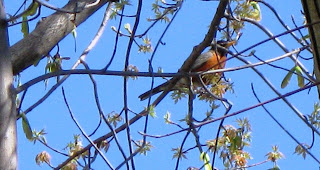 And Charlie? Well look what I got of him! He was maybe 1-2' lower on the tree than the robin. All I did was crop a bit of extra out of the picture. That's it. First he tried playing hide-and-go-seek with me. 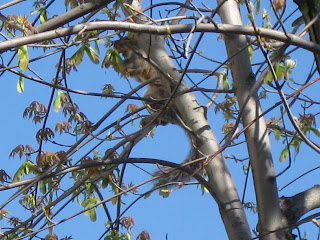 And then he decided it was suppertime. 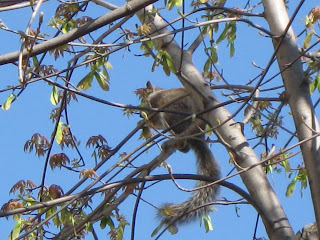 Oh I am SO going to be having fun with this camera! I've had it a bit over a week and already racked up nearly 200 pix on it. Seems this baby has another little battery in it so I dont have to re-do the date and time on it everytime I change the batteries. And speaking of the batteries? I've only changed them ONCE since I got this camera. With the Samsung I need to change them in less than 15 minutes. I'm lucky if I get 10 shots off before I have to change them out.
posted at 4/22/2009 05:15:00 AM

Glad you're enjoying your new toy. :)

would you believe I have the same exact camera!!! Yep thats right, got it for christmas and I too love it. You should do wordless wednesdays, all you do is post a photo. Now go have fun looking for photo ops.

Great pics. Looks like you've figured out the camera pretty well. My camera is a Canon PowerShot A570 IS and I still haven't taken the time to figure out all of the neat features it has.

I'll be looking for more pics, but right now I gotta get to work. :(

Those are some pretty cool pictures. I have squirrels everywhere here and have yet to take a Charlie picture. Am going to need to work on that! I'm glad you are enjoying your new toy and look forward to seeing many more snaps!

I don't recognize that moon. :)

That Cardinal really makes for a great picture! So RED!

I like the Robin picture too - he/she really stands out against that vivid blue sky.

Robins can be as hard as Charlies to get to "sit and pose". I think all the critters you snapped suffer from Punkngrandswigglitis, so you getting such good pictures is awesome!

Wow what beautiful pics! I need to really go out and look around to find something to post!

I had a Samsung a few years ago and it too was a HUGE battery sucker! HUGE!!!

Have fun getting to know your camera!!

I like that camera! How much was it, if I may be so bold? I've been thinking about getting a new camera, but most of what I see on sale don't have zoom options any better than what I currently have.

Love the photos of the birds and Charlie. 10 feet away? That's nothing. My Charlie would climb up on my arm if I let him, lmao! (I was going to say up my leg, but that reminded me of someone else and a very fun squirrel night in chat.)

Great photos. I have a Canon Powershot that's only 2 years old or so, but I still get jealous when these new fancy and tinier models come out.

You have convinced me! I am looking for a new camera too:) Everyone just raves about Canon! Great photos!

I want to see these photos without the script over it.

We don't have cardinals so i am always excited to see one of my bloggy friends post one.

As for those "dern" squirrels, I've had to make a "spot" for the three that share about five back yards. I bribe them with peanuts on a low tree trunk so they quit swining on my hanging bird feeders.