I was over visiting at razorsandvines the other day and saw this quizzy thing she did. I figured, what the hell. I wasn't really overly surprised with the results to be honest.

About a week and a half (or was it two weeks) ago I sent several packages out. A couple care packages and about 3 cards (4 if you count the one in one of the care packages). Once card went to my "sis" in Georgia and the other to my dad. I know it was early but if I didnt send it when I did, I would have forgotten. Anyhow, below are the two cards with the insides pasted at the bottom of each respective card. 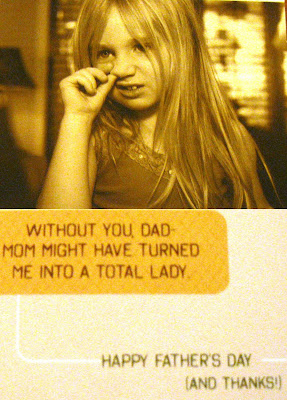 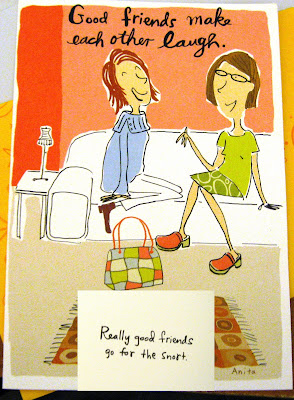 Yeah, I got some real class...LOL. At least I know they'll get a laugh. If I sent mushy ones, I would have gotten phone calls demanding who I was and where the "real" LadyStyx was. They know me too well. 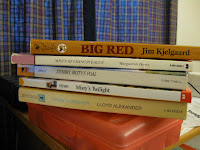 We popped into McKay's Secondhand books a couple times the last few weeks. It's wonderful to be finding some of the books I read as a kid for next to nothing, it surely beats paying full price. I found a few more books off the list I carry in my purse. Big Red was a hard one to find, actually almost anything from that author is hard to find. I actually "discovered" a new series written by Teri Farley while I was in Borders a couple weeks ago and have been working at getting every book in the series. I've got all but 5 books now. Best thing on this series? The fact that each book has only cost me $0.75 each. 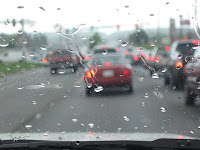 We've had quite a bit of rain here lately. While waiting for my nutritionist appointment last week, I saw on the news that we'd had 12 days of rain in 17 days. Here it is a week later and we've had several days more. The stinking weather is so bloody unstable that it's ridiculous. Today we had a cloudy cool day until afternoon and then it got sunny and humid. *bah* Shortly afterwards we had a bit more rain. I'm really getting tired of it. More rain means the weeds and grass grow quicker and on a dry day? Well my allergies act up.

I guess this will suffice for now. There's lots more little bits to write about so with any luck I'll have a few more days worth of entries. However, right now I'd kinda like to get the pix from the camera uploaded and the plates I captured sent to the Photobucket account. I've got the name narrowed down some and I may or may not put it to a vote depending on how sold I am on one of the choices.

Oh...and BRM? The WW is already up in a scheduled post. It should pop up around 5am or so.

You're absolutely right, that first picture is straight up classy! Love it!

Hope the weather lets up over on your end. We actually had sunshine today!

Blogger reader has been bizarre the last few days. I just realized I hadn't read any R&V in a few days and Blogger hadn't shown me any posts! But back to you....yes, we're being rained on too. I thought I was going to have to build an ark tonight and it's not stopping till tomorrow morning.

I like the cards. I never send sentimental cards either. I really cringe on Mother's Day - I feel so hideous trying to find a card that says something nice that isn't a lie and then think, maybe she'll just accept the flowers and not notice the lack of a card. But then I always manage to find some card, but I hate it....

I still have your adorable kitty as my screensaver.....still loving her up!

Glad you're managing to find some of the books you want from your childhood. :)

Our weather's been all over the place too. As long as it doesn't get overly hot I don't really mind any kind of weather that much, but when it's really cold and wet one minute, then really hot the next... I hate that. The other day I got absolutely soaked while just in a t-shirt, because it was lovely and hot when I left with Mam, and I figured since I only needed to walk to and from the car I wouldn't need a jacket even if it rained. By the time we got to her place it was raining so hard I got soaked to the skin just walking down the path from the gate to the door. And she only lives a few miles from me. And by the time I was leaving her place it was warm again. I wish the weather would make its mind up. *Sigh*

Those cards are pure class. LOL

It is really neat that you are finding the books on your list. And at bargain prices!!!! It doesn't get any better than that.

You described our weather to a T. What's up with that?

There's a lot of truth in those cards! :)

I can't wait to hear what you've come up with for a name!

We're getting pounded with rain showers around here too. Four huge storms within the last 24 hours. Today looks ok which is good because we have to drive out of town for a graduation party in a bit. I hate going to those.

The cards were cute. LOL

It's raining up here again today. If the sun comes out later, maybe I can get me some more rainbow pics.

You high-strung and nervous? Nope, don't see that at ALL! LOL

I think the weather has been bad for everyone this spring. I was just talking to my niece in CO a little bit ago. She said it was raining there, and it was raining in San Diego, which means we've got at least two more storms on the way. I'm really getting tired of all this rain.

I LOVE those cards!

The dollar was a one time extravangance.. :)

You got me to snort at that first card! LOL...

I'm glad you got the books you want - with this crazy weather, laying in some reading seems to be a good idea.

I have hundreds of books that me lads have had over the years since they was born, many many favourites and hence that is why I cant lob them out or give them away, so that when they are fully grown and have kids of their own, they dont have to hunt secondhand book shops looking for their childhood books, they will just have to come here and help themselves :)

sorry about the rain, its been gorgeous here but storms and thunder and much rain forecast for the end of the week......

fanks you, just for being you..