So after my shot and the errand running on Thursday, we pulled into our parking space at the TH and what do we see? This cute little bugger. It might have been our good friend Sugar Bush. I'm kinda hoping so because I've been worried she hasn't written in her blog since Christmas. My dear friend Deanna aka punkn had commented once that Sugar had been spending alot of time raiding the bird feeders in the area. Evidently,as you can well see, that isn't the case. 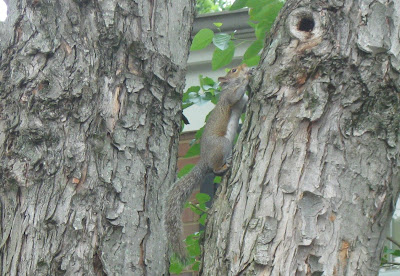 You see her there? She's sitting at the top of the picture, peeking down from out of frame. But oh! What was that hunny? Look farther down the trunk? Ok.... 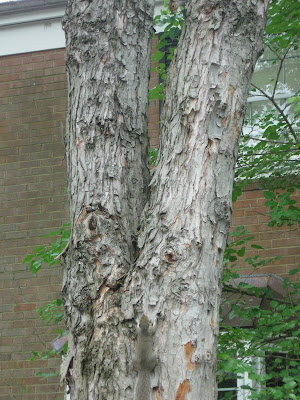 Hey! It looks like she's traveling with Charlie! No wonder we hadn't seen him in a while either. 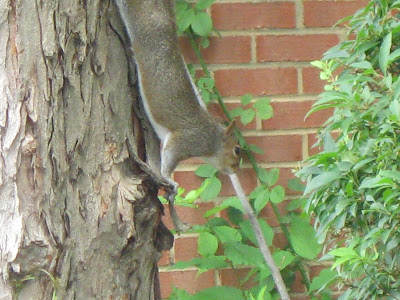 As you can see, both of them are doing very well. They squeaked that I could take all the shots I wanted, so long as I passed along to their dear friends that they said hi. They were very adamant about the conditions. So, here it is from Sugar and Charlie:

we have several that visit our back yard / and our over the back yard fence neighbor. I think they live in her trees.

My neighbor across the street traps the one that come to his yard -- and rides away with them on his bike. He lets them loose in someone elses neighborhood. In fact - it someone he knows and doesn't like. Oh my.

Adorable! Squirrels are so cute. :) (In fact, my first sentence went something like, "Mommy, look, I see the hovel!" I pronounced "hovel" like "hoh-vul," and since I was pointing at the squirrel when I said it, my mom figured that's what I was referring to. So now when my parents and I mention anything about squirrels, we refer to them as "hovels"...haha!)

We have a cheeky squirrel that hops along our fence and steals bits off the bird table :0

I glad to see Sugar and Charlie are doing well. :)

I'd give an arm to be able to take a Charlie picture like those. The two looking at each was a real catch!

Wow! Those pictures are fantastalistic! Sugar! where are you sugar....

So nice to see them again!!! Great shots hun!

Your pics are great. I think I'll leave the squirrel pics to the pros and forget about posting the ones I was gonna post. I had a couple running around the trees here the other day but had to take the pics thru my kitchen windows. Too far away to zoom in close like this with my camera. Great job!

I had to beat Charlie off with my broom this morning. He was eating all my birdseed!

If someone had gotten a video of me doing that, it would be a hit on youtube, lol.