So I got this postie note in my email yesterday evening: 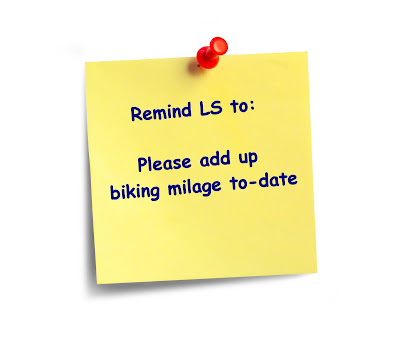 Gotta love when my friends remember what I'm supposed to be doing . *laffz*

Anyhow, here's how the last 10 (and a smidge over) months have gone biking-wise.

My average mph on any given day is 15.27. Not great, but I've been in a bit of a fight lately. Some days I just do NOT wanna get on that contraption. I think it's mostly because my knees have been putting up a fight and a half. When I dont ride, the right knee decides to act up and if I DO ride ...well depending on the ride I had that day my left knee likes to complain. It's to the point of having to put Icy Hot patches one either or the other OR both sometimes. Just another thing to add to my list for the dr this month (appt scehduled for the 17th)

At least I haven't totally given up on riding....that's a plus, right?

Mileage: 2,736.94 miles. I could have easily done a one way trip from Frenchville, Maine to Homestead, Florida and been on my way back again. Another 12096 miles and it would be a round trip. If I was going cross country, I'd be about 4 miles out from Sacramento, California... which I will be headed through by the time I get done with today's ride.

Even more perspective... my present favorite meal... the Subway meatball marinara foot long sandwich (no fries, no chips, no soda) is 1,120 calories. I've burned nearly 86 of those.


all that time I've been riding and I've ONLY almost burned off 63 of those.

You sure have more energy than I do!!

At your current pace you will ride by me walking on the side of the road in about 750 days.

Those calories burned figures are depressing aren't they? The human body is very efficient and had to be so up until about a couple hundred years ago (or less). I was reading that a busy a farmer that did things the "old way" without tractors and such might burn as many as 6,000 calories a day. A couple whoppers with cheese and a little more and he's got those calories.

The only thing that seems to work is eat less. And for folks that like to eat and enjoy good food, thats really hard (but it is easy to avoid the whoppers).

Keep on keeping on!

Mmm, Chick-Fil-A. My favorite! LadyStyx, you're making me hungry!

Don't be so hard on yourself. You've done well, and you're still keeping going... That does count!

I think that average is actually more than respectable!

Wow! Good job! I just can't bike, it hurts my back.

Heres a way to keep it simple...just remember...calories in..calories out. The higher the fiber and lower fat grams the healthier it is for you and will be low in calories. The more calories you take in the harder you have to exercise to burn it off. Fast food is a big NO NO! Good luck to you.

You're doing great! Those statistics sure puts things into perspective!

You are AWESOME! I admire your hard work and your fortitude. Keep on truckin'!

You're doing great. Glad you're sticking with it. It takes determination and discipline to continue on with something like that when you hurt like you do. Great job.

Wow, I could never do it, and wow for a reader being so loyal as to remind YOU! LOL!

I have an award for you! Make sure you check out its origins (they are linked) it is a cool award! Gimme 5 minutes to finish posting it though! LOL!

Good job, keep it up and you will be at your target before you know it. And maybe before you catch Iggy and ride circles around him (cackling). LOL