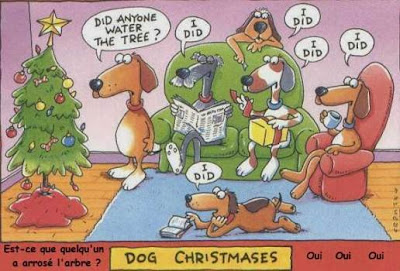 All the Christmas tree talk that's been going on in the blogs lately made me think of this picture that I socked away in my files a couple years ago (for Tori...it's entitled Dog Christmases and shows a family of dogs sitting around in a livingroom. One asks if anyone watered the tree and every other dog said they did it...).
I was talking to hubby yesterday and we've pretty much decided it's not going to be worth getting a transfer. Considering that we'll be going into corporate housing first and that it's not likely to be anywhere where we end up, there wasnt much sense in getting a transfer to one store just to have to transfer yet again. It just means I have to job hunt when I get out there is all. However, I'll have a few weeks back under my belt again and not a 4+ year hiatus to overcome.

I went in a tad early yesterday (Tuesday) and spoke with the assistant manager over the toys department. We had had a conversation last week or so ago about the fact I may have to leave on very short notice because of a trip back east to find a place to live. This week I told him that my last day was to be the 28th of December. There was just no way in the world with all the packing and stuff to do around the house that I could work past that date. With the trip coming up (Im guessing this will happen just after the first of the year due to timing...no sense going before because many places wont be open to show apartments) ...by the time we get back I figure we'll have about a week and a half to get the lion's share packed. I'm figuring since they want him to start on the 21st our goal to be in at least the corporate housing by the 14th so we have a chance to get used to the area. The assistant manager was fine with this...well he looked it but it's hard to tell with that dude because he's ALWAYS smiling. Kinda reminds me of Jack Nicholson's Joker in the Batman movies. Anyhow he asked when I was due on the clock. I told him I had 30 minutes before I was due on unless they wanted me sooner...which they did.
Last couple days have been really busy. You'd think a big holiday was coming up or something. Tonight (Wednesday) felt almost like a Friday night. It was fine up until around 830-9pm and then it was like the floodgates opened. I'd managed to clean 4 aisles before lunchbreak even though I was saddled with a person even newer than me. *sighs* We wont go into that as I really have nothing polite to say about him. Im just tired of having to repeat every. damn. word. every . damn. time. You'd think after 4 days he'd learn SOMETHING. I swear all the synapses arent firing upstairs. *shups* Anyhow after lunch I spent most of the rest of the time helping the department manager keep up on the reshops and attempt to go back over a couple of the aisles I had previously cleaned. I had told him that he needed to try and pick up as he was reshopping because I wasnt the one staying past 11pm...he was and it'd make things a whole lot easier on him if he did. Im not sure he entirely understood that. Something tells me he's an ESL *sighs and shups*. The dept manager did tell me he's going to miss me when I leave though. I take it not many have picked up quite as fast. It helps that he and I are an awful lot alike (highstrung) although Im more the perfectionist than he is. Maybe it's a female trait.
I think Im gonna leave it at that though. I just wanted to leave something in here as Im not certain how much time I'll have for anything tomorrow. We're supposed to be going out with a few friends tomorrow night as a last goodbye type of thing.
posted at 12/20/2007 12:59:00 AM

Okay, maybe I'm dumb or something...or maybe it's too early in the morning for me...but what does ESL mean? :\

This guy reminds me of the following comments made on students' report cards by teachers in the New York City public school system.

1. Since my last report, your child has reached rock bottom and has started to dig.

2. I would not allow this student to breed.

3. Your child has delusions of adequacy.

4. Your son is depriving a village somewhere of an idiot.

5. Your son sets low personal standards and then consistently fails to achieve them.

6. The student has a "full six-pack" but lacks the plastic thing to hold it all together.

7. This child has been working with glue too much.

8. When your daughter's IQ reaches 50, she should sell.

9. The gates are down, the lights are flashing, but the train isn't coming.

10. If this student were any more stupid, he'd have to be watered twice a week.

12. The wheel is turning but the hamster is definitely dead.

Good luck on the moving, finding a place, etc... Hope everything goes smoothly for you and hubby.

Hope you enjoy your night out with your friends. After everything that's been going on you probably REALLY need it!

I was going to ask what AK did, but I see Iggy answered it... Thanks Iggy.

LOL #10...making my cartoon above very much appropriate for this entry. Thanks iggy!

There are several at my store that seem to be ESLs BUT their English is so good I dont need to repeat myself. You should hear the breakroom. Most times there's a MINIMUM of 3 different languages going at the same time. On lunch it's not uncommon to hear English, Spanish and Im guessing, judging by some of the names and the area Im in, Vietnamese. Just last night there was a conversation going on in French (it's been 21 yrs since Ive had to speak it but I could pick out a word here and there). Yup...WalMart's taken over the Untied Nations...