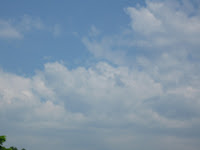 We had a beautiful day when we started out that Friday morning. The sun was bright and the skies were a gorgeous shade of blue. It was probably the best day we'd had in weeks. The good thing about it was that the roads were nice and clear and visibility was awesome. The bad thing was, as you could see in a previous post was I managed to get sunburned and sun poisoning on my arms from riding so long. The arms are itchy again, but it's a good itch because it means the scabs are ready to come off. 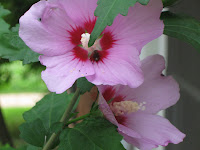 One our way out to the truck, I saw that those pretty purple flowers were in bloom again and since I wanted to play with my macro setting (I'd never used one even on the old camera), I took a few shots. There are more in the photostream if you care to go visit my Flickr account. I think it turned out right nice and vowed to myself I was going to take some time this trip to practice with that setting some more. 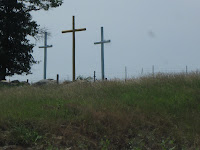 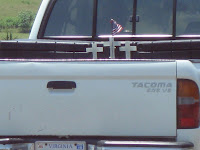 One of the things that I notice often, seemingly during trips to anywhere, are the triple crosses on the hills. You see them so often that you actually expect to see them. You don't, however, expect to see them on a truck as shown to the right. 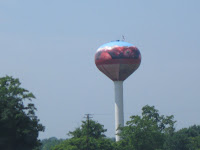 We only saw a couple watertowers on the way. This one was definitely the prettiest of the two. I wish there was a spot along the way were we could have stopped and gotten a decent shot of it. My picture really does it no justice. However, considering we were traveling about 75 mph at the time, I guess this is the best I can hope for.

Talk about your unusual sights! 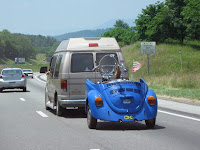 We came up behind this lovely
somewhere in south Virginia. At first glance, we thought they'd simply hacked up an old VW Beetle to use as a carrier for their bike. Kudos on the recycling , dude! Then, as we were passing, we realized.....it WAS the bike. Awesome.

A couple shots of what we saw while coming into Tennessee. It's B*E*A*Utiful 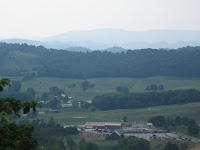 countryside to say the least. Part of me would move there in a heartbeat so long as there was a 2-3 hour (at least) buffer between me and the folks. Although, that close means weekend visits. *ugh* Maybe more like 4-5 hours buffer is necessary! However, the other side of me would totally rebel because I just know that the internet connection out that way would totally suck. 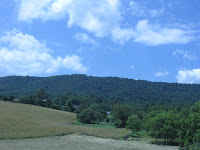 Not all the pics are coming through..probably just my computer. But the ones I can see are great!

That VW bike is awesome!

I love the macro setting on my camera. It is fun to play with. That is just gorgeous country. You could move there and just not tell the relatives ;)

I need to hit the road because I had no idea there was so much out there worth seeing. You found some cool stuff!

I think your photos are just fine! And it looks like you had a fun time on the road.

The little bit of TN I've seen is very beautiful. I'd love to just get away from people and not have my neighbors right on top of me. A little distance would be much better.

Oh what fun, a bit scary about the crosses though lol

I LOVE with a passion those painted water towers you have over there, we dont have anything like that here.... I loved finding them when we was in winsconsin a few years back.... just love em.... I would paint one like a giant spider if I had one in me garden lol

love all the photos :)

You could do a TV show, like Charles Kuralt's "On The Road".

Hmm.. I'm going to go over to flickr and see what are the flower photographer has created.

I love mountains...we have none here...but I still think mountains are beautiful One of these days maybe I can get back into NW Arkansas and take some pics of those mountains.
Yeah..move there...just don't tell his relatives.

Those are some gorgeous pictures! I love the bike!!

I have just discovered Palmer's Cocoa Butter for sunburn and it works wonderfully. Takes away the sting, itch and peeling.

Glad the damage the sun did is healing up.

Yep, it's beautiful scenery down thru that area. When Karen and I drove down to Alabama in 2005, it was hazy, hot and humid so my pictures weren't very good. That water tower is the one in Mount Jackson, Virginia. It's right along I-81, right? I took pics of it when we were driving by. (i've posted pics of it in my blog before) Did they raise the speed limit on I-81 or did you speed a little bit? LOL

The picture of the flower is beautiful, and the bug-bike was pretty cool.

Great pics, Styxie. I just took some time to look thru your pics on Flickr. I think I need to open up a Flickr account so I can put up some of my pics. If I need help, I think I know two people who I can contact. :)

Back to the kitchen to wash the dishes. :(

Thanks for the travelogue. I'm still trying to wrap my tiny pea of a brain around that beetle and the bike. So, except for the "itchies," sounds to me like you had a love time, oui?

It's amazing what you see when your looking through the lens of a camera. TN. is the greenest state in the land of the free, its beautiful. Looks like you had a great road trip.

Ok ya gotta stop changing the name of the blog, I'm blond, I get confused!

Who knew you could get so many great pics on the road!

The purple flowers(in case you don't know) are called "Rose of Sharon." They come in a bunch of colors. They are related to hibiscus, but they don't die in the cold.