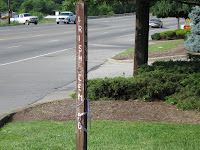 This was a rather odd road sign. I'm not certain why it wasn't changed over to the regular signing that every other street corner has. My only thought is that perhaps it has some historical significance, which is highly possible considering the area. In our walk, and during the drives through the very small town, I've never seen another quite like it. 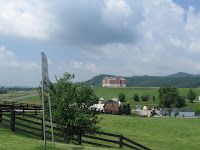 There is such alot of farmland in the area. In the distance of this particular shot to the right you can see the medical center (?) and the mountains behind it. 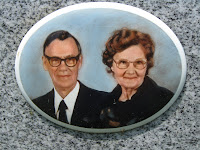 Every trip in, we nearly always pay a visit to at least one of the cemeteries his kin are buried in. The close-up to the left is a picture of his paternal grandparents. This is the gramma we visit every time we're in (she's in her 90's). The grandpa passed on many many years ago. A bit of trivia: hubby was named after both his grandfathers. His first name was his maternal grandpa's name, his middle from the paternal grandpa. 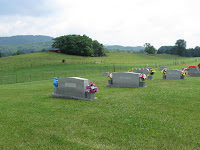 We took a few pictures while paying our respects to grandpa's grave. I was briefly struck by the shot that was afforded by this view. You probably can't really see it in the smaller version to the right and may have to click it to see what I did. Just beyond those tombstones is a fence and beyond that you can see the change in the length of grass. That spot in the middle between the trees and the tombstones? A cow. There was actually a whole herd underneath the trees there. A juxtaposition of life and death...was interesting to say the absolute least. 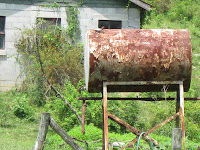 The next couple shots a few of you may have seen before. I didn't go any farther up the property for these shots, but you can see what a great zoom will do. No, I don't really expect I'll go farther up on the property for a better look. There's just something about the thought of doing so that makes me uneasy. I have yet to figure out why I feel that way. 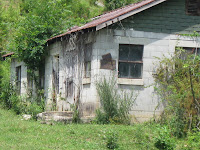 I do know that every other time I got that feeling, there was a ...well...unusual explanation as to why. I just didn't know it at the time when I got the willies. For example, the basement in one house I lived in, I refused to go in for some reason. Not for any reason in the world would I go down the stairs. I found out years later someone had died down there.... I do know that hubby's grandpa died somewhere on the property. Not sure if it was on the immediate property they still own or if it was across the road on property that used to be theirs. I do know it was a really horrible death though. I might be able to convince hubby to go up farther on the property on a later trip for some even closer shots. 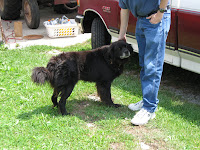 The pooch in the picture is Blackie. I reckon he's about about 8 or 9 years old. Either they *finally* trained him (not bloody likely as it's just gramma and the one uncle living there now and well...lets just say my ex had more drive than this man does...yeah, I so went there), OR (the more probable answer) the dog's just getting old and can't jump up like he used to. Either way, I was grateful to not be greeted as per his usual. Not to say that he's enthusiastic, but I've taken to calling him "The Beast". 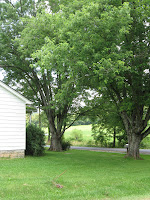 The last picture for today is of the two trees in gramma's yard. Some of you may remember these from the December pix. They look quite different all dressed up in their summer clothes. I really need to see about a peak-time visit because I'm betting they are simply beautiful when the autumnal colors grace their boughs.

I won't be posting any more pictures from gramma's house this trip. Sadly, everytime we visit she seems to get worse and worse from previous trips. I won't go into any more detail about it as it is rather ...well let's just say I shouldn't discuss it in an open forum. I have my opinion about the whole thing and my husband agrees with what I have to say about it. However, it's not my say in this matter...it's between gramma, the uncle and my FIL.
posted at 7/12/2009 05:52:00 PM

In the photograph of the fuel tank - I remember that last you posted a picture of it - and I asked if you had a close-up or an enlargement because I found that picture haunting - Its probably silly - but you sense something - and that picture had a vibe to it.

was you in the movie the shinning.?? lol all work and no play makes ladystyx a boreing ...oh well you can take it from there ,im j/k hun.. Jr

You covered quite a bit of ground in your trip, didn't you. I have to say that basements ALWAYS creep me out! I'm a Texas gal, and they don't dig basements 'cause of the consistency of the soil. Soooooooo, I spend as little time in our basement as possible. I think it's 'cause I can't see any natural light...

That's beautiful country you were in. I have never seen a sign like that before either. I can't imagine that would be any help in the darkness whatsoever!

I'm sorry to hear about gramma's health. It's just so hard to see people age.

Aw the sceneries are outstanding! Beautiful and you're right, those trees at gram will be gorgeous in the fall:)

ok, who is trying to do away with gramma?

Those two trees look quite old. I'm sure the foliage is beautiful in the autumn.

Karen and I were in the cemetery where some of my grandparents, and a few great aunts and uncles are buried a couple of Sundays ago. I took quite a few pictures and was going to post them sometime. I also took pictures of the very old part of the cemetey. I'm wondering if that black cow in the middle of the field of your pic was a bull. After all, it's grazing right above the Bull plot marker. :)

I out-clicked on the tank and house pictures and didn't get any vibes. But I do know what you mean about sensing things. It is best to just stay away.

It is very hard to see old people go downhill like that. And it is easy to second guess the judgment of others. I will admit here that I often questioned the judgment of my dad when it came to my mom. I felt she would have gotten better care in a home. And I was wrong. So very wrong...

That was an interesting sign post and I have seen that type before but can't for the life of me remember where! (I'm getting old... ;)

I too am thinking your "cow" is actually a bull. However, I would also think it would be in it's own pasture in that case. *shrug*

I've enjoyed the pictures of TN. Thanks for sharing!