Feel the burn!!! Best ride of this level and third best for the month. Can you imagine the speed I woulda had if the R&B station was playing all fast music tonite? 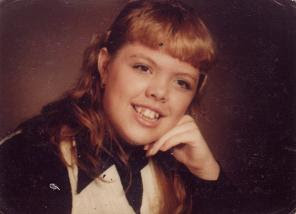 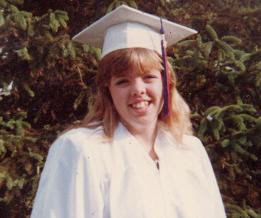 Here are the pictures I promised in my last entry. The picture to the left is my school picture from my senior year of high school (1986-1987). I remember the day that was taken. It was in the middle of August 1986 and in the high 90's with the worst humidity we'd seen all summer. I was pretty much melting by the time I got there. This is not the picture that was in the yearbook though. They made me use one of those standard shots for that. A shame as this was the best shot of the bunch.

The picture to the right was taken on graduation day...mid June 1987. As was custom for non-rainy commencement ceremonies, our graduation was held out on the football field. Thank goodness us gals were in the white robes as if I had to wear the blue the guys were in or the black ones the teachers were in....I would have passed out. It was so warm that day we actually had ambulances parked in the parkinglot just in case and volunteers from the honor society and some of the staff passing water out in the stands.
In the above to pix I'm roughly 100 pounds lighter than I am now. I'll be happy to get even *just* that small....at this rate, it's entirely possible.
And here I am now...22 years later with my handsome hubby. This is a special collage we had done with the shots we picked out from our photo shoot. The middle pic is being made into a
10 x 13 for the wall in our dining room...this collage will go in the hallway or up in the office. It's 22 years later and with the exception of my weight, I dont think I've changed too much. I certainly dont look like Im pushing 40...nope, not at all! 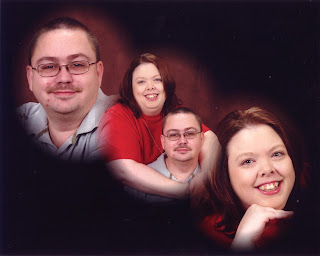 That's a beautiful mural...your smile hasn't changed in the slightest over the years.

Great share. I really enjoyed seeing the high school pictures and the one of you and hubby. You are right, you have not changed much at all.

Keep up the great job on the bike!

They're both right, you haven't changed at all in 22 years. All the pictures are fantastic!

I remember my graduation, it was in the mid 90's and ours was INSIDE THE GYMNASIUM. And all students were wearing black robes.

You haven't change one bit!!! I'm so jealous!

Yes, they are all great photos...the last one is really nice. You two make a nice couple. *hugs*