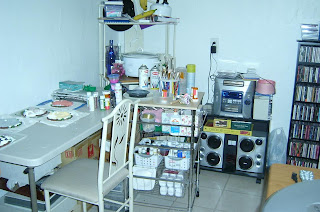 This is the crafting corner of my kitchen that I mentioned in the other blog entry. On a sunny day it gets so nice and bright in there and I dont need much in the lines of overhead lighting. There's a door to the spare bedroom farther to the right. I used to have my crafts set up in there but it became a "out of sight out of mind" issue with me and since I was hoping to make stuff to sell, it didnt do any good to leave it in there. Besides that room got too hot and the light didnt hit the room until later afternoon....plus it hit the projects all on the wrong side (a shadow from my hand would be cast on the piece). Top things off I wanted the stereo for kitchen work AND for painting. I could always roll the stereo into the spare room if I really wanted to but I also dont want the "kids" coming in that room (it's the only pet free room in the whole house). Cant close the door because the plug on that wall (the wall between the kitchen and the spareroom) is located in the kitchen which means cords in doorways and doors not being able to be closed all the way...and sneaky 4 legged kids roaming where they dont belong. 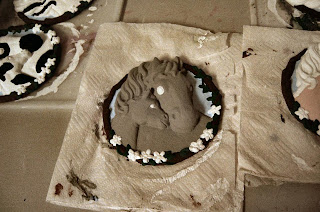 Here is one of the 6 pieces Im working on. It's about half done. I got the flowers painted late last night and have a bunch of touch up to do on it. The pic isnt too good because the flash tends to go off no matter what and it manages to wash some of the subjects out. To compensate for this, I cover over the flash and then attempt to lighten the picture later as it's easier than going the other direction.

waaaaaaa, I can't see the pictures!

Hmmm they're coming up over here just fine....did you try clicking where the pic was supposed to be to see if it'd show up?

Well, I can see the pictures, and they're very nice!

Btw, my Dad told me about something yesterday that might be the reason ChicagoLady can't see the pictures. You know how you have the dashes between the words? Well, sometimes the various programs that run the things on the computers have trouble recognising what the dashes are all about. The best way to be sure that everyone can see the pictures is to avoid using spaces, dashes, etc.

Good idea Tori. I'll get them changed now. Thanks for the heads up.

Whatever it was, I can see the pictures now! I agree, that craft space is very bright, not a lot of need for artificial lighting. I'm sure the horsey will look very nice once it's completed.

I ended up doing a name change and re-loading. I'll have to keep this in mind when I rename pictures. That section of the kitchen is simply beautiful for painting in when we have sun. Not so much when we have the cloudy , rainy days like we had been having. That horse should look good. It's one of 6 Im doing. Same style just different colors. One is going to be a palamino, one grey, one tannish, one an orangy rustish color and two are being done as pintos.

No need to thank me. I wouldn't have known about it if my Dad hadn't told me. I'll thank him for you if you want though, LOL!