What a better way to start off the LOVES listing by the one thing most gals (and some of those "special" guys love...MEN. I could go with majorly hot men (my eyecandy?) and really do this up right, but Im not going to. In fact, Im going to stick completely with my theme and makes sure the guys are all starting with the letter M. So sorry Chicago, there wont be any naming of Jensen nor Jared in my list. Please accept the email I sent ya and this picture as consolation: 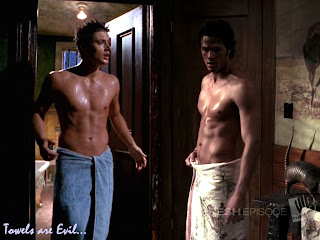 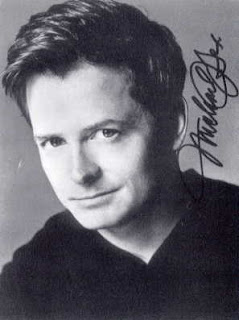 M is for Michael J Fox. I gotta admire the work ethic this man had (or is it has?) that he kept on going even after the Parkinson's hit him. He didnt even let on there was a problem until a good many years AFTER he'd been diagnosed and semi-retired come the year 2000. Even with this disease, he's kept on working by establishing the Michael J Fox Foundation for Parkinson's Research. 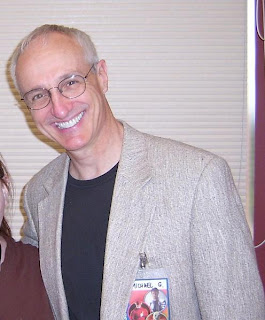 M is for Michael Gross. What? You dont recognize him? Ahh it must be because he's a bit older and is clean shaven (not to mention that little bit of bling in his earlobe). For this one I dipped into the same tv show as Michael J Fox....that's right, Michael Gross played his dad. He's also been in all the Tremor movies as well. This shot was actually captured by my husband while we were at a Sci Fi convention and the brown shirt and the lock of hair belongs to me ~grinz~. It's a horrid shot of me so I cropped it out for posting in here. Of all the actors and actresses we met that day, only 3 were even the least bit pleasant and took the time with each person (it also helped that their lines were slower..unlike poor Gates McFadden who was simply overwhelmed) . This was Michael Gross's first convention and he was just plain happy to be there. We must have chatted a good 20 minutes before my hubby caught up with me and another 10 minutes afterwards! 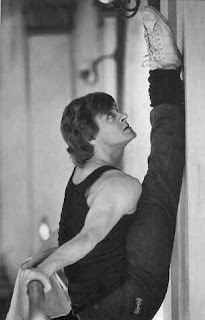 M is for Mikhail Baryshnikov. Any man who has the confidence (not to mention the guts) to get into those tights and prance around with the power of a bull and the grace of a gazelle definitely deserves a spot on my list. One of my favorite Christmas season tapings is The Nutcracker with him dancing the lead. As fair in the face as he was in his youth, recent pictures of him now (he's in his 60s) show he hasnt really lost any of those wonderful good looks. I would have LOVED to actually see this man dance on the stage (as opposed to watching via a TV) when he was in his prime. Im betting even now, his dancing is more than likely spectacular. 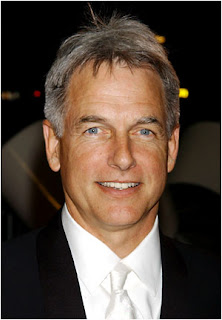 M is for Mark Harmon. NCIS is an awesome show, so coming back and seeing the reruns repeatedly is no big thing. However, if the show was lame, I'd still come back just to see those pretty blue eyes of his. So the fact that it's a really great show and wonderful story lines is all pretty much gravy. 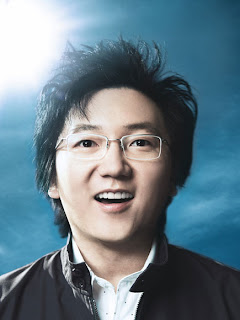 M is for Masi Oka! Right now he's best known for his time manipulating Hiro Nakamura on Heros and for his part in Get Smart with Anne Hathaway and Steve Carell. However, we've seen his work much before he became known for his work in those two projects. His first job after graduation from Brown University was for Industrial Light and Magic, which is George Lucas's motion picture visual special effects company. Maki Oka's work through this company can be seen in movies such as : The Perfect Storm, Pirates of the Caribbean: The Deadman's Chest and the Star Wars prequel trilogy. He's here simply because his character Hiro is so sweet, I just wanna pinch his cheeks....even if he DOES look constipated when he's doing that time manipulation thingy.

Ok. For those that want to, here's a challenge for today:


Find 5 men (ladies for the guys) that you think would make a list like this. Performers only...actors, actresses, singers, Broadway, etc...

01) If you previous played this game with another letter, use that letter for your listing here.

02) If you didnt play before, use the letter I was issued.

Damn! I have to use the letter B, and not J!

*gigglez @ Chicago* maybe if you did a grouping of Brothers? Then the Winchesters can be listed!

Daryl Hannah - I loved her in the mermaid movie with Tom Hanks...

Debra Winger - the only reason I would watch a cowboy movie...

did I mention Denise Richards??

Some nice choices there iggy! I love Drew ,,,she just so pretty and I love the movies she's done. Diane's a great choice too...simply marvelous and seems to get prettier with age.