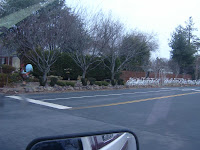 While cleaning up my computer desk top, I came across a file that had a scanned picture in it. The picture within had been scanned on July 9th so I'm guessing the magazine it was in was either the May or June edition because I'm not finding the article in the July edition that I have on hand. Anyhow, it reminded me of a pic I took back in March sometime. Ya'll may remember it (shown to the left). I took it about the time iggy started his rather imaginative (and informative) OCHA articles. While on the way to the townhouse I had seen this fence made of white bikes. I snapped the pic and filed it in the appropriately labelled "iggy pix" folder of my Photobucket. If I recall, someone said that sometimes a white bike fence is just that, a white bike fence. At that point I was willing to just let it go. 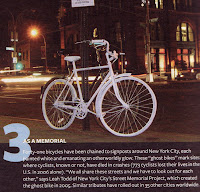 That is until my Reader's Digest came in and I found this pic. Now I'm beginning to wonder if there isn't more to the story of that white bike fence. Oh I'm not curious enough to pull into the fella's driveway and out and out ask a stranger about the fence. Why? Because I'd hate to think that the fence is just a creative use of old bikes and hence, just a fence. I am however, curious enough to wonder about it. Is this the purpose they had in mind when they assembled it? Was it assembled a little at a time with one bike added for every death? Were they family members or just victims that died at that corner and in essence the bikes are a memorial. Worse yet, was it one huge accident that took them all at the same time? In any case, I know I wont be biking near that corner any too soon.
posted at 7/18/2008 12:43:00 PM

I hope it's purpose isn't as grim as the possibilities.

Just down the road a few (few as in less than 6) miles.

Very interesting ideas as to the purpose of the bike fence. Sometimes it's better not to satisfy your curiosity, it keeps the imagination going to what it's real purpose is.