Oh how I love the timing of things. Iggy knows exactly what Im talking about as we've talked about it before via email. How a topic will come up in the Blogs or chat and next thing I know....they show up in a picture or the comics somewhere else on the web within a day or so. The latest one was brought up in Chicagolady's July 22nd entry regarding the bird variety as well as Kaylee’s fish variety . Well today while reading the edjumikashunalz I came across the following : 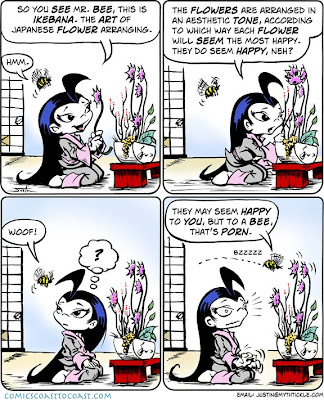 Now, I've heard of the birds and bees...but the fish? *shakes head*


The Seattle paper I look at daily (for the edjumikashunalz), has links off to the right with pictures attached. Many times it'll be the weeks amazing animals or modeling in Europe or even star sightings. Well the other day, while perusing the day's pictures, I saw one that brought a couple entries to mind. The first being Chicagolady's entry of July 19th and the other being from out of iggy’s blog . What was the picture? Why this of course: 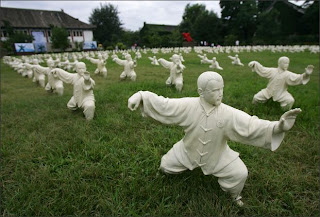 According to Seattlepi.com , they are "Sculptures of people performing Tai Chi are displayed at Peking University in Beijing, China. A total of 600 sculptures have been placed on the campus to usher in the Olympic Games. Peking University Gymnasium is the table tennis venue for the 2008 Beijing Olympics." So long as Angelina Jolie isnt in town doing a Tomb Raider convention, they should be safe.


These are only two of the more recent occurances of this happening to me. There's another story of this happening with my SIL (I swear if that one lady in the comics gets preggers again I'll cry because it means another niece or nephew is coming along). Now I know I cant POSSIBLY be the ONLY one that this has happened to. Feel free to use my comment section to share your experiences with this odd phenomenon. While you're at it answer this, do these events happen due to some really wonky cosmic timing OR is it simply that they were there all along and we've noticed them simply because we've been discussing them (aka: the iggy OCHA effect)?
posted at 8/15/2008 10:17:00 PM

That was an odd topic of mine huh?

LOL just a tad. It's good to have the odd entry now and then though. Thanks for visiting.

I think it's a combination of both...we think or read about things and suddenly we see or hear them. (but then I've always thought I was a little psychic...or is that psychotic?) *shrugs*

I really like the legs in the air banner picture!

And I thought Kaylee's blog on "nude fish" being used as search terms that hit on her blog hilarious - Google nude fish and her blog shows up about the 23-24 entry. Um, I know this because I tried it! I was thinking that there is (or was) a fad not long ago that some fishermen were talking about at the Chestertown Marina about fishing nude. In fact, you can rent a sailboat and go to the carribean and sail, fish, swim, whatever (insert Lainie's patented evil eye roll here) naked. Why? I don't know - I think sunscreen causes brain dysfunction myself.

I think Alice Kay is right, its a combination of both (perhaps more of the mention it - see it syndrome than the psyhic (although this might work on a level of "see it but not conciously note it").

Alice: to use ya own words...you're a combination of both. That's part of your charm ;) LOL

iggy:Thanks. It's actually a scan of an Anniversary card my folks sent last year.

Yes it was funny. I think I need to check and see if I can figure out if mine's coming up in some unusual searches. Might be a fun topic for all of us to look into.

It is like I don't notice a certain type vehicle until I own one - then I always notice that type car.

I just had it happen today. I remember just a few weeks ago, Iggy taking the picture of the Sofa King truck, and mentioning Jopete using that phrase, and then Iggy and I had an email exchange about Sofa King. Now here I get an email with a Sofa King picture.

I think you're more likely to notice something if you've been talking about it recently. It also works with if you really want or have recently gotten something. For example... Since I got Kero and then Jayde (who didn't stay with me long, and is my Grandma's dog now) I have noticed Westies and Yorkies more than I did before. It seemed like hardly anyone had either type of dog. Then I got them and they suddenly seemed to be everywhere! I know it's not exactly the same thing, but personally I think it falls under the same sort of catagory.

Exactly! Like, I was always a car is a car is a car. The only ones I could pick out were the Beetles and Mustangs because they looked way different. Now, I know an 80's model Cavelier when I see one...I can pick out a Ford Tempo and pretty much can pick out a Kia Sephia. Then there's the Beemers, Jags,and Boxters only cause they're ka-chingville....not to mention a PT Cruiser, Smart Cars, the mini Cooper and the Prowler just for their unusual styling.

Of course there's always the iggy-OCHA effect where we dont notice something until it's being talked about. I know for sure I didnt notice the nefarious actions of some of those cones until it was pointed out to me. I just find it odd that sometimes the pictures show up elsewhere (comics, funny pix, news articles etc) shortly there after the discussions. One wonders, are these people infected with this effect too? Or are they simple skimming our blogs for ideas?

I do the same thing with cars. As soon as I buy a new car, I see that model all over the place, where I never saw them before. It's like they all know I now own one and it's safe to bring them onto the roads now.