Norristown, Pa- Early this morning the results of Orange Conehead-Alien's affair with the Loving Lamb Sheep arrived in a quiet corner of a local farm in Norristown. The farmer and his wife were, to say the least, extremely shocked at the hue of the lamb. Officials say that no paternity test is necessary as it's blatantly obvious who the father of this lamb is.


According to the farmer, 5 months ago he heard a loud ruckus outside in the sheep pen. When he went out to check on the commotion, he found evidence that "some critter" had been digging to get under the fence as well as pieces of orange plastic embedded in the gate. He moved all the sheep into his barn for the remainder of the night. The next morning, when he checked on them, each ewe had orange smudges on her rump. Officials originally chalked it up to teens playing a prank and "tagging" the sheep with spray paint. 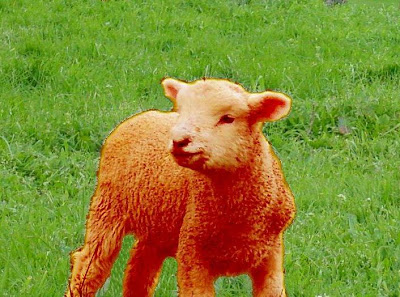 So this OCHA was using..what was it you said "some cheap fake tanner and not naturally orange" LMAO

Nah I think you may have been right. It took punkn's comment in the last entry to make me realize I mis-read yours.

LOL okay...*shakes Styxie awake so she can understand what she's reading" LOL

Will they let this orange OCHA lamb breed? LOL Styxy TOO funny.

Well, I for one, would order a sweater knitted from this sheep's wool in a jiffy.

I'm glad I've been out of town - Gee, a guy could get blamed for things and for doing unnatural stuff. LOL