Tuesday and odds and ends

Yesterday was shot day. The shot didnt sting nearly as much as last week but then again when I mentioned how much it did the nurse working suspected that some of the alcohol from the wipe had gotten pushed in when the injection was given because it wasnt dried off first. She made sure to dry off the spot before giving the shot. This week it's still itching and has lumped up a bit bigger than last week. I suspect that the alcohol had reduced the itching and lumping last week so I've made note to ask the nurse about it. The topical Benedryl gel doesnt seem to work so well anymore (looks at label....hmmm...outta date, no wonder!) so Im going to ask about taking an oral form of the medicine for just the day and day after a shot. Next week we start the next vial of the stuff. *ew* Personally, Im not seeing a change yet as I still feel horrid first thing when I get up. However, it's still early on yet.

Before going to the dr's, we decided to go out to lunch. The original plan was to go to KFC for 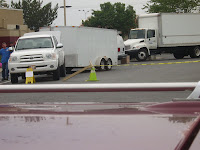 some (hides Marmie's eyes) fried chicken but the restaurant was closed. Im not sure why. It could be for upgrades or something. Im sure it wasnt for just the parking lot because there were plenty of parking spots close enough. We decided to go somewhere else but something caught my eye and so I whipped my camera out and caught yet a SECOND case of alien abuse in less than a week's time! This poor YCHA was made to stand for countless hours on end with no break holding that "Do not cross" tape. If that humiliation wasnt bad enough, the two-legged y-chromosome aliens from Mars had jammed a piece of wood in the top of his head! Such violence in this day and age... 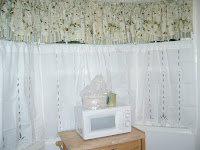 Last Thursday, before our trip, I *finally* dealt with those blinds. I think it looks cheesy but it's better than it was to say the least. I do have to admit that I like the fact that they brighten up the kitchen some. They dont look it but the valances actually cost less than the tiers because I got them on clearance. I just wish I'd though to grab the matching tiers at the time. Oh well. I could always get the matching toppers for the tiers I have but they dont come in the style I have, they only come in swags. I dont want swags up to be honest. Mostly because of the fact the side windows are so narrow and there's just no good way to get the swags to look nice up there. If I put a full set over the narrow windows, then the set over the middle window would need to be doubled so they're just as full as the side windows... Ah well.
Well, I'd best get the next entry started while the last of the pictures are getting uploaded into my Photobucket account.
posted at 8/06/2008 03:28:00 PM

My headaches just looking at that poor YCHA (pronounciation? Yech-ah?)

Are these shots supposed to be building up "immunity" or are they looking for what you are allergic to with more specificality?

You do know, don't you, that most medications (not all, but the bulk of them) only carry "use by dates" in order to persuade you to buy more? Some food products work the same way. And it's always possible you've just become immune to that particular medicine... I've done that with the stuff I used to take for kidney infections... I've had it so much it doesn't work any more (even when it's a brand new, definately within the "so-called" use by date.

It's a bit soon to expect the shots to be working properly... Give it time.

Yeh-cha
The testing was to specify what all I was allergic to. The shots are supposed to build up an immunity...like getting a flu shot. Just a whole lot more of them.

Yeah, I figured on that Tori. My body's the same with meds. Im constantly having to change them up. Really sux.

My last attempt at a comment blew up, due to a blogger outage. Let's see if I can recall what I said...

Oh yes, I commented about the YCHA...and how I have an OCHA by me that had a steel rod shoved up it's piehole and it's now been smooshed into the ground. I could take it's picture, with flash, in the dead of night, and it probably wouldn't notice me, lol.

I also commented about the window. It looks much better now than it did.

I think that's it then.

Yeah I know Chicago. That's why there wasnt yet another entry tonight because I knew it was coming up. I'd do it now but it's a tad late for me and Im nearly ready to climb into bed. I like the fact the curtains lighten up the room a bit more.