Thursday night we started pulling things together to pack. We weren't in any great hurry because it wasnt as though we had to leave early. I figure we got about half of the stuff we needed set aside and a list made of all the stuff we'd require for our weekend away. On Friday morning, we got up around 8-830am. While hubby took the dog to the "spa" (for those just joining us in this Blogspot, "spa" is my code for boarding the dog at the vet's), I got things packed up. I cant believe how much crap we take along everytime. One of these days I really need to streamline our travelling somewhat. Two people shouldnt need a full-sized suitcase, garment bag AND a full tote for just a couple nights away.

Once we got packed, we popped over across the street to IHOP (International house of Pancakes) for breakfast. The waitress came over to take our drink order and to let us know what the specials were. I asked her "What do you NOT have today?" *laffz* She gave me a puzzled look and began to laugh when I explained that we go to IHOP once a month or so and the last 2 trips they didnt have the one special I was interested in trying for that month. I then told her that I'd told hubby with the fact they had 2 I wanted to try that it'd be my luck that they'd have neither. Once she and I got ourselves composed, she told me they had both. On the off chance that they'd "run out" before she got the order in ...I gave her 3 different orders in the order of preference. *laffz* We were told that Sundays were bad and Sunday afternoon worst because they always were out of nearly everything, especially the specials. *makes note to not go on a Sunday afternoon* I did manage to get my first choice of meal, so I was a happy camper when we left. 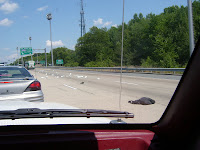 As per usual, I fell asleep for about an hour or so while hubby was driving. I dont recall seeing us approach DC or see any signs saying we were leaving the area. Shoot, I dont even remember seeing any signs saying we were leaving Manassas. All I know is we were past DC and headed towards Baltimore when I woke up. We got to the first of the about 3 or so toll boothes that we were going to encounter when I noticed some paraphernalia in the road. As we got closer, I realized that someone had just had a very very bad day. There was a suitcase in the road (which was still closed thank goodness) and a tote bag (that big black object closest to our truck) which had unfortunately opened spilling most, if not all of its contents. Thank goodness the contents were nothing much more than disposable diapers and were easily (I hope) replaceable. The big green sign says the toll booth is 1000 feet away from that point and you can see the bag's several feet before that. This poor guy came jogging up the road to attempt to collect his stuff. By the time we'd gotten past the toll booth, the diapers had been knocked and strewn several hundred feet PAST the toll area. Definitely a bad day for that poor guy. Only major complaint the entire trip in is the stupid construction. Thank goodness I usually sleep through most of it.

The hotel was absolutely beautiful. I could definitely get used to 4 and 5 star hotels very easily. 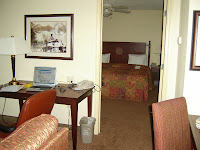 What we got was more what I had anticipated when we moved to Virginia in January. Actually, it's a bit more than what I expected as back then I had been thinking we'd get no more than a Motel6 extend stay room. This hotel suite had a bedroom, bathroom, small galley kitchen and a livingroom with sofa, chair and desk. There were 2 tvs (on in the bedroom and one with a game system hooked to it in the livingroom) and a table that separated the livingroom and kitchen areas. I could have easily stayed a week in this room without getting that antsy cooped up feeling. Actually, now that I think of it.....this suite was larger than my first apartment! In the suite, there was a ceiling fan in the bedroom and 2 small AC units...one in each main room. The kitchen had a stove with 2 burners, sink, fridge and even a dishwasher. Every morning between 6 and 9am they served breakfast. I dont mean a cheesy donuts and coffee "Continental" breakfast....I mean a small buffet with plenty to eat. There were cereals, eggs, waffles, breakfast meats, juices, fruits etc etc etc. MMMmmm yummy. The only complaint I have is that we had some rowdy people on our floor and every so often it felt like a damn earthquake.
posted at 8/06/2008 06:20:00 PM

Oh, very nice room - I could live in a place like this if the sofa is comfy.

*reads about buffet and gets hungry so snacks on stale crackers*

dang and I stayed 3 nights in a motel 6...didn't even have a fridge or microwave *wahhh cries cries*

I wouldn't want to be that mother, needing a diaper for the baby and...OOPS! They're all out on the road.

I too have a hard time staying awake as a passenger when taking trips as short as an hour. Too easy to close the eyes and drift off...

I didnt sit on the sofa any but if is was as comfy as the arm chair was then I bet it was plenty comfy. That office chair was ok but it felt like it was a bit lower than I was use to.

.oO(good thing I didnt put the pic of the kitchen up then...we had both....oh wait, she mighta gone to the Photobucket account and seen it already...)The Motel6's have comfier beds ;)

I hear ya there Chicago. Im good for about a 30 minute ride but anything longer and I ~usually~ fall right to sleep. Im sure it was a self-defense mechanism from the first marriage as I didnt wanna listen to him bitch the whole trip. I did really good comin back into Virginia though. Didnt nap off for the entire trip. But then, we travelled a bit more than half way and I was excited because we were going to the aquarium so I had something to look forward to. Then the rest of the trip was about 90 min-2hr and hubby and I had something to talk about (planning another trip to Baltimore this fall).

Nice, nice, nice. That is my kind of place. We usually stay at Drury Inns or Bed and Breakfasts when we travel. I feel sorry for that poor sucker with his stuff all over the side of the road. I, too, find it hard to stay awake when I am the passenger rather than the driver unless we are in unfamiliar territory. Then I'm too afraid I'm going to miss something and am able to stay WIDE awake. *takes a sip of iggy's coffee - durn it, it's cold*

That poor guy really was having a bad day!

At least I had an excuse to need a suit case and a "tote bag"... Braille books take up a lot of room, so by the time I had them in the "tote bag" there wasn't any room for anything else... Hence needing a small suitcase too. *winks*

That hotel sounds really nice. The place we stayed at was nice too, but not as nice as that. There was a nice breakfast selection though... Not that we tried any of it. It wasn't included in the prices of the rooms, and we weren't about to pay their prices for breakfast when it was only a short walk in to town for a choice of other less expensive alternatives. (Even the waffle place would have been cheaper than breakfast at the hotel).