The National Aquarium in Baltimore 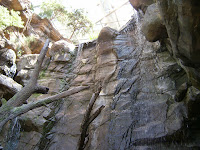 The wait was well worth it though. Infact, if I had to wait a bit longer to assure there wouldnt be quite so many inside and I could see things at my own leasure...I woulda done it happily. Yeah....this Aquarium was definitely worth the trip. The only ones that come even close to being worth the trip are the 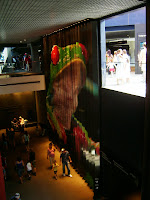 They had these floor to ceiling pictures in the main concourse area. The pictures were made accordion style so that if you looked at it one way you saw one type of critter. If you saw it from a different angle, a different critter entirely was seen. It took me a moment to figure it out because I was snappin my camera and I'd look back and think I missed a picture LOL....so I went back to get the shot and when I looked back up, a different pic was there (one that I had snapped already). *laffz* They had the requisite sharks jaws set up in this area too. As opposed to the aquarium in NOLA (New Orleans, Louisiana), this one had a staff member set up to take your picture for a fee. Dont ya just love when they realize they're missing out on an opportunity and start charging for it. Thanks but no, I got my own camera and can do it myself if I ~really~ want a touristy trinket (besides, isnt that what the gift shops and cafes are on nearly every level are for?). 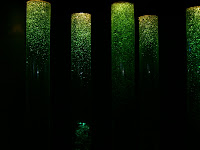 Isnt this a freaky shot? We were going past this one area with tubes of water just bubbling through. It was very dimly lit with the light mostly coming from the top of the tubes so the place simply glowed a bit. I originally took a shot with the flash and of course the light just bounced everywhere so in this shot I covered my flash and let the lights up top do all the work. It almost looks like something out of Star Trek....or those beaming lights they like to add to some of the alien abduction type movies. I think next time Im going to grab a clip of these on video. 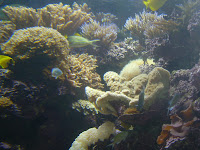 One of the first places we headed to was the shark and rays area. This particular exhibit was for the reef life. The picture to the right is one of the better shots. We all know how hard it is to get a good shot in an aquarium. It's always a tad dark and if you use your flash, you generally wreck your shot. The only way to get a decent pic most times is to put the lens right up to the glass and pray you get the critter you're aiming for. LOL! There was one type of fish I was hoping to catch on "film" but they were just way too fast. Three or four would go speeding by and be gone before the shutter could click on your camera. They were this really unbelieveably shiny silver. The only way I could catch them was on video and then it didnt even do their beauty any justice. Whatsucks is that the website to this place doesnt even have a picture to share in here of them. *pouts* Actually, they do...but they dont have it labelled. It's the one they have posted on the animals page....next to where it says fish. They just dont have a link for that specific type. Ah well. 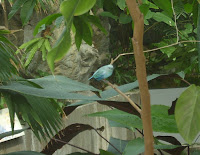 We went into the aviary at one point and saw all sorts of pretty birds. The lovely little specemin to the left here is a blue-gray tanager. Boy, I really need to get a better camera with a more powerful zoom. This picture is actually a crop of the original photo and as such isnt nearly as sharp as I'd like it. They had some small tamarins caged in the upper levels of the aviary. I love spending time in an aviary, looking at all the pretty birds and listening to their beautiful songs. There's just one problem with it... Thankfully, this was the first trip to one where I didnt have 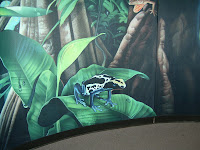 THAT problem! Coming out of the aviary there was this absolutely gorgeous mural on the wall of a tropical rainforest. I've gotten several shots of it and they're in my Photobucket account right now. There was a brilliant orange tropical bird, a dragonfly, a butterfly and this frog (poison dart?) pictured to the right. I wish the wall didnt curve like it did because 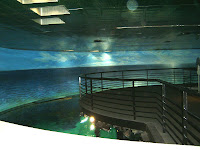 the one shot would have made a great wallpaper. I think one of the best murals I saw is the one pictured to the left here. This was located in the topmost tier of the aquarium. I ~think~ this is where the divers had access to the reef exhibit, but Im not completely sure. While we were there, there were some divers entering the tank to do some cleaning and checking on the animals. About 2 or 3 were going in while we were up top. 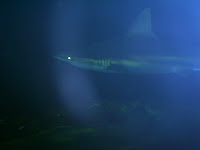 I think the hardest to capture were the sharks, rays and skates. In fact, most of the pictures were so dark I had to do some adjusting on them so you could see more than a faint outline and the flash of their eyes. there were several different kinds of sharks on display. I saw the bonnethead, the sand tiger, a couple of nurses and this beautiful specemin to the right. They dont have him labelled on their site so Im not sure which shark it is. I know it's not a black or white tip reef shark because it's not marked up for that. Im thinking it might have been a sandbar shark, but I could be wrong. 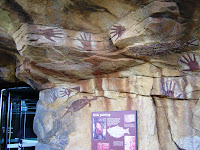 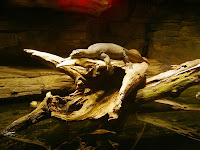 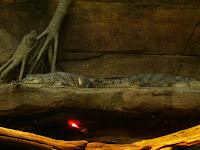 We missed a whole section though because it was very crowded. They had a penguin and puffin feeding that we missed because I couldnt get close enough to get pix and there was just no getting near the animals with the adaptations (puffer fish, octupi, etc) because they were a huge draw for the little ones. Especially since it was feeding time for many of the critters. I cant wait to go back again so I can take my time checking things out. Additional photos are in my Photobucket account.
posted at 8/21/2008 06:17:00 PM

Very cool! I understand about the difficulty of getting good pictures. Many of the areas there just isn't enough light to get a good shot, even with flash.

I'm not sure what kind of shark that is either, I clicked on it to see a bigger view of it, but it's still not that clear of a picture, so I couldn't tell what it is.

I too love going to places like the Aquarium, Planetarium, Museum of Science & Industry, but there are so many kids there, it's hard for us "big kids" to spend the kind of time we want to at each exhibit.

And sometimes the flash CANT be used because it'll just bounce back at ya and ruin the pic. Like the one with the gators...you can see where I covered the flash with my hand (the red blotch below the animals). If I didnt block it..well the picture wouldnt have turned out nearly as well.

Im mostly the type that likes the animal exhibits....aquariums, zoos, Museums of Natural History (there's an AWESOME one in NYC!!!)

I had that same exactly problem at the zoo when trying to take pictures of animals in was and/or behind glass. I mostly used no flash, but it was a problem. This is another post that I will return to visit when I have time to appreciate it. The pictures look great.

Really good Pics Lady!! yes it is very hard to take pics with glass around the "critter" your taking the pic of but you did a very good job. Looks like too much walking for me!

I finally was able to sit up long enough to look at your wonderful pictures.

And I think you are right about that shark being a Sandbar Shark They have a pretty distinctive curved dorsal fin.

I'll see if I can find out what the mystery silve fish was when I can.

Absolute wonderful pictures especially so given the lighting and the crowds.

Nice post and great pics. I took a lot of pics when we took Marty to the New Jersey State Aquarium in 1996, but they're on 35mm film. One of these days I need to dig out my pics and negatives and try out that thing I bought my dad....before it's time to give it to him for his birthday. LOL