Not much going on here. Just cant seem to get motivated for anything lately. Im tired all day and when I think I should get to bed, I wake right up . Next thing I know it's several hours later than the goal bedtime.*sigh* I think Im going to start setting my alarm FOR bedtime....or at least to get me started that direction on time.
Well, I've been on the "local" honey for a week now. I dont know if it's working or if it's just the timing and all to be honest (wishful thinking??). I do know I was able to pull myself off the Flonase for the last few days and just keep to the Astelin. That should make the eye doctor happy. The last eye dr had a fit I was on the Flonase because it had the steroids in it and could cause cateracts...that's why I had myself pulled off it in the first place. The Astelin tastes like ass, but it's a non-steroid medicine. I managed to make it 3-4 days without the additional Flonase on top of the Astelin. Today it feels like Im going to have to go back on it again for a couple days because my ear hurts again. Ah well. I dont feel as stuffy as usual though. I'll give it another week before I decide on whether to keep up with the honey or not....well maybe I'll take it to just past my allergist appointment. That's gonna be fun...I have to be OFF my meds for 5 days or more so they can do the testing. If Im sick, they wont test. Thing is, I need the meds to feel well....so if Im off them I get sick and if Im on them the tests wont work (they wont even allow me Benedryl...not that it does much for my sinuses anyhow!). *sighz*
We had a helluva storm the other night. It rained for about 20 minutes or so earlier in the day and figured that'd be it. Infact when my TxSis called, she asked about the weather and I'd told her 20 minutes of rain and that's it. Wasnt sure what it was doing outside as it was dark and I wasnt about to go out and check. No sooner I was off the phone with her then I noticed it was raining hard. Shortly after, there were flashes of light out there, but it wasnt bad at. No thunder or anything so I figured it was traffic. The cable was going a little wonky on the tv but again nothing big to worry me. A bit later...we started getting the "turn to Ch21" alerts on the screen. Oh my. Stupid people running that area of the site Im telling ya. They sat there and posted the alert AFTER it'd already expired!! They had one that was supposed to last from 10:45pm until 11:15pm. When do you suppose it got aired? 11:30pm. Shit...my townhouse coulda been blown clear over by then!! this happened not once but TWICE during the course of the night. A warning that was much too late to do me any good at all. Well anyway they were more concerned with those points ~just~ south and east of me. Dale City was actually mentioned at one point...they're 20 minutes to my SE. Yeah this one was a close one. I cant believe we've had two in a little more than as many weeks. At least here I have Harry's Closet and a half bath downstairs to go to for safety. Now if we could get the damn stations to post the information in a more timely manner!! We had some flooding in the area.... not in my neighborhood nor between hubby's work and here though. Only damage I saw out there was to my irises. A shame...they were really pretty. Oh well. We'll just mow em down tomorrow and look for them next year. It's just too bad it didnt do any damage to the bamboo out back...that shit's weeds. They're as bad as raspberry bushes (yummy berries but damn it takes over a yard) I swear! If I cant find something to kill it off, Im going to need to take and dig it all up and pray I get it roots and all. 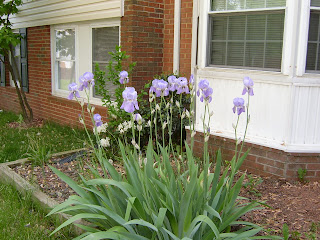 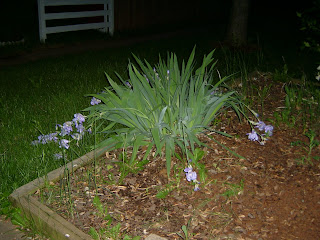 You cant really see it in the smaller pic of the bamboo (like those smaller pix of the irises) so I posted a larger one from my Photobucket. If you click on it, it'll take you to the picture on that site and it can be seen better. You can see a piece of bamboo that's managed to get between the slats of the fence. I've done some reading tonight on how to get rid of it so I'll be trying the ideas out in the next couple weeks when hubby gets back on days. The "operation" is going to take the both of us to do. Im hoping we wont need to dig as it's all near the fencing. I'd hate for that crap to ruin that fencing (the side is the neighbor's responsibility and I'd hate to have to deal with having to replace it). The bamboo extends all the way from the back fence up to our home...gonna be alot of work. I dunno who was so stupid as to plant this stuff.
posted at 5/10/2008 09:06:00 PM

Ut oh.. bamboo removal is really tough. It grows fast, is nice and green... but once it starts nothing short of a nuke will kill it, it seems.

*hugs* I hope YOU feel better soon. The spring allergy season has to end sometime -

Useless alert if it comes up AFTER it's expired!

Good luck with the allergist.

Sounds like you're having quite a time with your allergies. Hope the symptoms ease up soon.

So I've been reading iggy. I found a site that suggested cutting it down to 6" in height and immediately painting it with a heavy-duty herbicide. It'll be a two person job but if it works, Im all for it.

I dunno if they will Chicago. Odd part is that the neighbor's patch of irises survived just fine. However, their home is positioned differently than mine so I suspect they were just better shielded from the storm.

As for the allergies...yeah Alice, iggy and Chicago...Im hoping something starts working soon. My luck I'll need to go in for shots to help the other meds out. *sigh*

one of the worst things about this time of year is allergies..pollen runs crazy and when it rans the water is yellow! Hope your feeling better *hugs*

Sounds like you're having a really bad time of it with your allergies. I hope they can get to the bottom of the problem in that test and get you "sorted out" once and for all. I'm sure life would be a lot easier for you if they could do that. *hugs*