I got this award from Yaya. Thank you, darling. I still have no clue why I receieved it. Is it because I still make my rounds to everyone else's blogs even when I'm not writing in mine? For I certainly have not been faithful to my own blog. The decor's stayed the same for a few months now....it really needs to be refreshed. 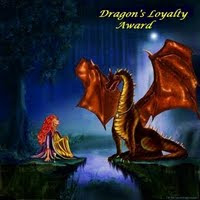 Now, I didn't see any rules to this award...but only one name was picked (I'm flattered as Im sure there were others much more worthy). Although a good many of my readers really DO deserve this award (and if it isnt presented to you in the next little bit, please feel free to come by and snag it off my blog...I won't mind), I think all will agree that the next person this absolutely MUST go to is our darling, squirrel stalking, OCHA loving, Spongebob infatuated buddy Iggy.
The weather's been really kinda aggravating lately. It can't seem to decide on whether it wants to be cold or warm.Today we have rain and cold. I think in a week or so, we'll be bringing the fans to the storage unit for the season. I think this week's going to be the week I break out the winter gear. I am wondering how much of it is actually going to fit. I suspect, considering my love of t-shirts and other knit items, that most of it'll still fit.

Got a bag of clothing from the friend of a friend again. Seems she's lost more weight. Kudos to her. I had to laugh while I was trying the stuff on, though. The size 24 jeans wouldn't even come up to my hips. Rather depressing, wouldn't you say? Then I tried on the 20s and they came up and over the butt, but wouldn't button...yeah...that's when I started giggling too. Then I tried the size 22s...which turned out to be a smidge too big (and as of today....I can slide them on and off without unbuttoning or unzipping them). Gotta love the fact companies can't be bothered to standardize their sizes.

Heard from my most recent problem child. Things are starting to work themselves out between us. Im still mad at the situation, but I think I've figured out why certain things haven't been said. I still have to deal with the one email but I suspect this should clear up sometime before Christmas. Her and her sister will be moving to another location soon, without THEIR problem child. I suspect things will clear up soon for them once removed from that situation. Also once they're moved, my problem child will be able to finalize her divorce. In fact, I ~think~ the finalization is this coming Friday. It feels like it's been forever, Then again, mine took even longer to get done.

Hubby and I have been fighting illness all through October and the latter half of September. Well, lemme rephrase, HE'S been sick all this time, I've been fine-ish. I've also had several specialist appointments since I last dropped a serious entry. I won't go into them now because they're an entry all and on their own (the podiatrist appointment was particularly ~fun~ ...sarcasm intended). I may or may not cover them, haven't decided yet. I have another specialist appointment later this month so the medical entry may just wait until then.

I've got some pictures on one of the flash drives around here that I've been meaning to share. I caught a shot of a bird a month and a half or so ago that we don't normally see in our area. If I recall, there were quite a few in our little bloggy circle that posted the same kind of bird and I figured that I'd hold off for a bit on it.

If there's any topic that I've brought up in previous entries that you were wondering about (either I didn't an update on or just haven't given enough details on), please leave it below in my comments and I'll see about getting it addressed in this next week or two.
posted at 11/10/2009 09:22:00 PM

Glad you're still alive and kicking! Or feeling somewhat better. Family issues can really weigh on your spirit, can't they? It can even make you physically ill. I hope things improve for all of your family by the holidays.

I hope you and Ranger feel completely better long before Thanksgiving gets here... and that the creative muse finds its way to tickle your fingers soon.

Thanks for the update...congratulations on your weight loss...keep up the good work and Keep the Faith...life comes at you fast sometimes.

Glad to see a post from you. You deserve that award. You are always loyal to the blogs you follow. And you're right, Iggy deserves to receive it.

Thanks for the update. I have been wondering how you are doing and want to hear more. Hugs.

Congrats on your award! btw, I don't think your blog needs sprucing. It looks good!

I often wonder who they modeled these sizes after and why there isn't a standard measurement. There is for shoes! (pretty much)

I noticed you said you had a storage unit, do you know they are the biggest waste of money going.Stop and add up what you pay for a unit for a year sometime..It mite surpise you ,i know ..in some cases they are a must have for all the goodies we want to keep.I just wished i had a peice of land some place close to the ole town where i came from,think about it, they have no over head, because you dont heat them or anything, just rent open space..good freind of mine owns a big one , and he gets a lot of goodies from peole that dont keep up theyer rent, he has to close them down and either keep or sell whats in the storage unit.I could have gotton a free upright piano once.lol not giveing you a hard tiem hun...im just gabbing..JR Hugs ya

what a beautiful award!! congrats girly and you do deserve it!!

maybe a dragon award for Cronus...

You may not be loyal to your own blog, but you are definately loyal to everyone else's blogs. Therefore, you do deserve the award, and... Congrats! :)

I completely agree that Iggy should get it too! :)

That's one of the reasons I hate clothes shopping. Where sizes aren't standardized it becomes a lot of hastle. You have to try the spacific item on to be sure it will fit. A couple of times I've even gone and brought the same size and brand of something, but only tried one of the two I brought on. Well, you'd think the other would fit, right? I mean, same brand, same size, etc. But, no! The other one was too small! So, you can't even guarantee that the same size from the same place will be the same, if you know what I mean. It's even worse when you know - for example - that a size 20 should fit, and you finally find something you want in that size - perhaps a top for a dinner out, or something - but the top doesn't even come close to fitting, and they don't have bigger. Don't you just hate that? You've spent AGES looking, getting more and more frustrated, you finally find what you REALLY want to wear, and it wont go up to a size that's big enough for you!

Sorry you've not been feeling too well. Hope you're feeling better!

I was on your blog a couple of times the past two days and didn't see this entry. Sometimes I have to refresh in order to see new entries. :\

Sorry to hear you both have been feeling sick and I hope you both feel better soon. Being sick is no fun. Mine stuck with me for at least 4 weeks, if not longer.

You're doing great with the weight loss. I wish I was as dedicated as you have been. Keep up the good work.

Looking forward to your pics. Have a great weekend.

I've been so bad about keeping up with everyone lately! Congrats on your award!!!! You ARE a faithful reader!!

I hope things are smooth sailing for you in November and December!!!!