So it looks like we had a beautiful day today. I wouldnt know because I wasnt up for the day until 4pm or so. I was awaken earlier by a phone call but had climbed right back into bed because I was still tired. I'll have to get out of that habit really quick. Anyhow, I was just out a bit ago and it was lovely. The themometer registered 80 degrees, but it was a dry 80 with a slight breeze. Almost makes me wish I had been up for the day sooner. It was actually cooler outside than it was inside. The thermostat read only 74 downstairs but it sure felt warmer....and upstairs? Well I know that's a good 4-5 degrees warmer than the thermostat. Hubby's got the windows popped open right now. Damn I wish they'd hurry and put the screen in for the sliding glass door downstairs so we could get a cross breeze. I'd really hate to resort to the AC so soon.

Like I mentioned in the first paragraph, I was awaken by a phone call at 1230pm. I'd only had maybe 6 hours sleep at this point. Normally now, I'd be ripping into the person being rude by calling so early in my day. The caller id showed a name I wasnt familiar with, so I reckoned it was a wrong number and they'd hang up when the answering machine came on. I've had a couple wrong numbers since we got here and generally the machine takes care of it. Well I heard the message as it was being recorded. The gentleman introduced himself and said he was from McKay's Bookstore. Well I knew full well why he was calling and it wasnt to tell me my book came in ;). The call was a bit awkward because I was still groggy, I dont think I made a terribly good first impression at all. Ah well. Anyhow, by the time I hung up I had an appointment for an interview for this coming Monday (hubby crawled back into bed after opening the windows so I havent had a chance to tell him yet). Im not thinking it's going to be overly ideal for me *BUT* it'll be something different...and a paycheck. The good thing is I *believe* this is one of the stores I had filled out that I wanted Tuesday and Wednesday nights off. I figure that kept me available on the nights they really would need me, namely the weekend. There are only a couple other dates Im going to need off and we can discuss them on Monday.

Some of you may have noticed (and Chicago pointed out) that we managed to get a SPAM comment in here on the last entry. Man I hate SPAM. Worse yet I hate foreign SPAM. The comments are always word for word the same with the exception of the company that's sending it. As Chicago pointed out, it's highly likely that this section of my blog will be going to a captcha for comments. I dont really want to because I know Tori reads here and likes to leave her little messages as well. So for now Im going to just not use the title section and place the title in the entry itself. I suspect there's something in the title that's coming up in searches and that's why we're having the problem. It's either that or it's coming up because of something Im saying in the blog. If this doesnt work, I'll be going into the comments section and tightening things down some. I'd hate to do that because that's no way to make new friends. 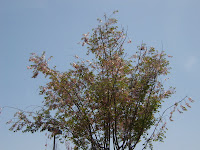 As you can see with this pic, the white blooms are just about gone around here. Thank goodness for that. I was beginning to think they'd be like the magnolias that bloom in waves and last months and months on end. Unfortunately, this isnt the case because as they're on their way out we had another type of tree decide it was time to bloom. 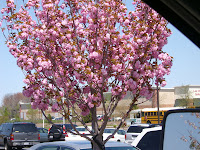 May I introduce the FPFT (fkn pink flowered tree)...cousin, I suspect, to the FWFT. Yep these buggers went into bloom just a few days ago. I cant wait for that testing I mentioned in the last entry...I bet I find out Im allergic to these too. Probably am allergic to at least half of the pretty flowers I saw the other day. Ah well.

I guess that's it for now...not a whole lot more going on right now.

Good luck on the interview Monday. I'd love to work in a bookstore or library!

:D thanks. McKays (I see I didnt put this in the entry...) is a used books and music store. I see some of my check going right out the window....

Good luck in the interview. Admitedly it may not have the biggest pay check, but I can think of worse jobs you could get.

Best of luck to you Styxie! A bookstore job would be cool, but add the music AND the used part and I'd be working overtime for free. :)

LOL@FWFT and FPFT - if they come in pink then white they are almost certainly cherry trees. And when the flowers are gone (and they won't stay long) they stay gone until next spring.

*chimes in along with the others* Good luck with the interview. Sounds like it might be a fun job for you.

That pink tree is perty. :)

Gotta get going now. Will catch up with your blog tomorrow. (i hope) *hugs*