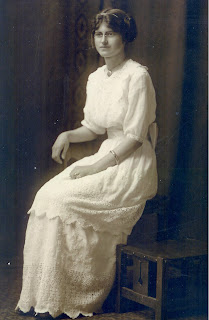 I was in chat the other night and got a pm asking if it was too soon for a reminder on the family pix. *laffs* If I recall we were in someone else's blog and they'd been talking about their gramma or great gramma. The woman to the left there is my great gramma on my daddy's side. They lived in Iowa so we didnt get to visit much. The picture on the left was taken in 1918 and if I recall she'd either just turned 20 or was in her very early 20's at the time. I remember when we visited, her home was located behind what used to be her and her late husband's store. 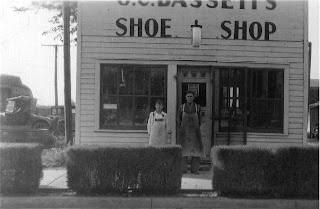 This picture to the right is the storefront. The older gentleman is great grampa and the boy is grampa. Grampa was an only child as was my daddy. As a child, I dont ever remember seeing the outside of the shop from the front and I recall very little of the yard out back. 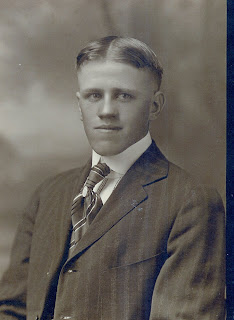 The picture of the gentleman to the left is great grampa, also taken in 1918. There's no denying the family resemblance as the guys down the line have the same basic eyes and ears. The resemblance between my brother and grampa is absolutely unreal. I may not post the two of them as my brother has these privacy issues and I respect that. You'll just need to take my word for it on the similarities.

This next photo on the right is their wedding photo. 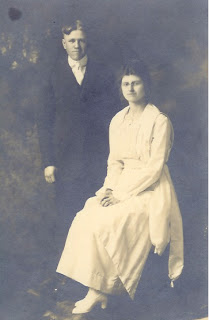 This one, I suspect, is the family with great great grampa and great great gramma seated. It also was taken in 1918. A rather stern looking bunch, but those were the times too. She was the only one I knew from that part of the family.

I remember snippits of things. I remember the older kitchen where she'd cook this awesome meal at lunch...only she'd call it supper and dinner was called dinner but was more like lunch with sandwiches. I remember while visiting, it was always assumed I'd do the dishes simply because I was the girl and the men folk (brother included) were allowed to leave for the living room after meal time (I really hated that...gender divided chores, unreal in this day and age!). I remember one visit when we went out with gramma (Daddy's mom, great gramma's daughter in law)...and having to share the bed with her while gramma slept on the sleeper sofa with my brother (at the time brother kicked in his sleep and great gram was rather frail). I remember our last trip out. Daddy had insisted we go and Im sure neither bro and I understood why we had to "go see that old lady again". Oh the ignorance of youth. That trip we went to the graveyard and saw all sorts of tombstones and then we saw one with a name, a date of birth and no death date. The realization that it was her grave we were looking at was chilling. That trip, I think, was the one where they finalized some arrangements for her to go into a nursing home. She was one smart cookie though. Great gramma wrote everything down...every little thing. When she realized she was getting a bit more unsteady (she fell twice in her declining years), she took to changing out the flowerpot in the kitchen window. If the plant didnt change, then the neighbors knew to come check on her. When she started getting forgetful, she decided to put herself into a nursing home. She would not hear of the family moving back to help out as she was "perfectly capable of doing for herself". I mean, what the hell...she'd done it for nearly 20 years by then. When we visited last, we were brought to see where she'd be staying. I think it was more for daddy's peace of mind than anything. This particular visit, I think I started to understand why we went when we could. She was so frail that I was almost afraid to hug her because I thought I'd break her. I even suspected, though I didnt know why at the time, it wouldnt be much longer at that point.

In 1989 (?...give or take a year), she passed on. Not to say this woman was organized but she had the dress she wanted to wear all picked out. She had the plot of land, the tombstone, the service and everything all paid for already. She had her pall bearers all picked out, their alternates (incase one passed before her or couldnt perform him duties), and their alternate's alternates. The hard part had been for daddy and gramma to go through her closet in the nursing home. Great gramma kept nearly everything she could manage to keep. Letters, notes (even notes on weddings- what was worn by whom, what was eaten, what the decor was, the gifts...every little detail- now I know where I get that trait from), cards, bonds, everything. It took a week to weed through it all.

Very nice pictures of your relatives. I have pictures like that, very stern looking poses, I always wondered why they didn't smile. Unfortunately, I don't have memories of relatives beyond my grandparents, as I was the last grandchild, so they were older and pretty much any older relatives had all passed by then.

I might post some of mine sometime, if I can remember where the pictures are, and who they're of, lol.

LOL I have several more. Many, thanks to dad, have names but not really what the relationship is. I have one that is so old, that it's an illustration of them. At least I used to....maybe I better go look.

Wow. I don't think the person that was "reminding" you in chat meant to be "pushy" but I'm glad they were. Those are really neat pictures! And the memories are really neat too. I know single child families tend to be slim on the relatives (my Dad is an only child) so I've not many aunts and uncles and such.

I once heard someone say that the oldsters were grim looking on account of their teeth a lot of times. Modern dentistry is well, "modern", and a lot of times in the older pictures you had to keep really still for a long time, since the film was sloooooow.

:) Thanks for sharing the pictures! I thought the first one was breath-taking - she was a "real looker". The shoe store looked/s? a lot like an old hardware store me and my grandpop went to in Milton Mills, NH (The Middle of Nowhere is around the corner from there.) I can still smell the variety of things that there.

And now that it is spring, and I mention Milton Mills, I remember the warm smell of the wild strawberry patch that was out back of their farm house (they retired to it, never farmed). Mmmm... so nice. :)

My mother is an only child, too. Love the pics and the history behind them.