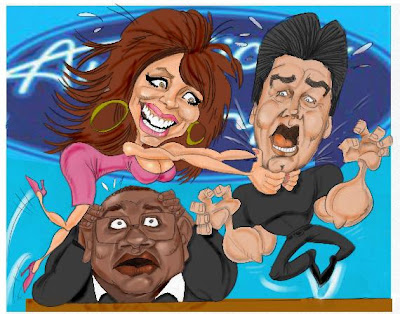 Well we're down to the last few days of my primary obsession and NO Chicago...I aint picking until I absolutely HAVE to. Even down to the wire, it won't matter much because I like them both. It would be better if Kris won though because I'm sure Adam's going to have an easier time getting signed. Both will have great careers though.

Anyhow. With the monster entry I do weekly in the Jukebox and all the reading I do for that show, last thing I really feel like is writing about anything else. It also doesn't help that I have been fighting "those" kinda days.

Not to say the show (and a few other things) has become a huge time-suck over here, but I've been thrown clear off my usual daily rituals. I'm lucky if I get the blogs read and commented daily AND (are ya sitting?) I've gotten mostly "edjumakashunal" free. Yep. There's only two strips I MUST read and everything else for the most part is ignored now. Go figure I finally got their links sorted into folders in my favorites. *laffz*

I've been really enjoying my new camera (picture at left from online). More than 500 pictures have been snapped with it and I've used up ~maybe~ 6 sets of batteries. The juice gets sucked down fast because I keep the camera on while we're travelling in the truck...so I don't miss anything. Oh, this reminds me.... I still have plates to post in Photobucket. I haven't really been in any hurry to get them uploaded because HLP got hitched this past Saturday (the 16th...congrats hun, I hope you have better luck with that date than I did!) and won't be doing anything new for a couple weeks while she's on her honeymoon. Excuse me for a second....I gotta go deal with this horrid flashback..... 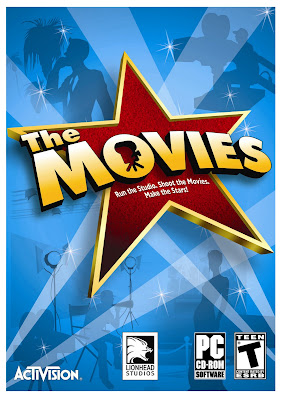 Anyhow...while hubby and I were out a couple weeks back, we were visiting McKays Secondhand store (music, videos, and games) and I saw they had the The Movies PC game. Ok, honestly, I saw it several weeks back. I'd pick it up, look at it and think "nah, not today...not at that price"...I really wasn't sure if I really wanted it that badly. Well, this last time (after about the 5th time picking it up and setting it back down) hubby asked if I was going to finally buy it. I told him I thought the price was too much and he told me that I was looking at the wrong sticker. *D'Oh* I was looking at the tag on the outer sleeve of the game, McKay's places their tags on the shell casing itself. So instead of the nearly $40 I was seeing on the sleeve, the game was only $5. Well for THAT price, even if it's a dog of a game, it wouldn't matter if I was able to get my money back or not (and the only way I get a refund on software there is if the game doesnt work). This game has gotten to be extremely addicting. I'll start playing and next thing I know, several hours have passed. Oh no! I guess I WON'T be getting to bed at 4am tonight either! I'm still learning the ins and outs of the game. 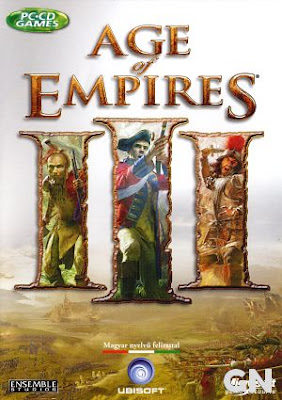 Age of Empires. Ok, this one isn't really as much as a time-suck as a game only lasts me about 90 minutes with the way I set it up. My trouble is if I'm having a bad day and decide to play more than one game, then I lose track of how much time has passed. This is one of those games that allows me to work out some anger/frustration/aggression (pick one...it'll fit the sitch) without ripping loose on someone I love or beating a hole through the wall. Another good game for times like that is Alpha Centauri or it's expansion pack Alien Crossfire (which both take HOURS to play for total world conquest). Neither game do I allow surrender... just total annihilation. Yeah, I know... violent. At least no one in the real world is getting hurt in the process. Heh. Reminds me of some of the games dickweed liked to play. Those stupid war simulations with the little cardboard pieces and dice. I hated those things. He'd insist I play too.... until that one New Years Eve. He proceeded to tell me he'd play it "historically" and told me how history went for that battle. I aint stupid. I didn't play historically. Let's just say the Allies didn't take Normandy that game. He never asked me to play again....I wonder why? 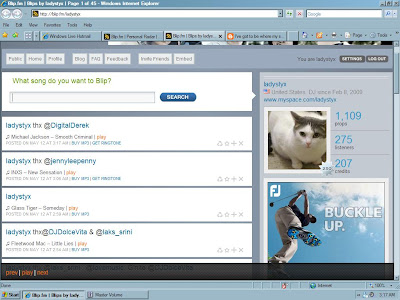 This is a screenshot of my profile page on my newest obsession. http://www.blip.fm/
Big HUGE time-suck. It's actually something I can play around with and multitask with easily if it wasnt for the fact I have this habit to keep an eye on my email account and say thank you for every prop I get (and I get ALOT). I found that this is ~almost~ a substitute for streaming... but not quite. In some cases it's better. Oh granted I don't get a live chat with it, but it's pretty close. I can come and go as I please, Im not stuck to a schedule, and there's ALWAYS some blippers on site (hi Simchabe!! *wavez*). Yeah, so ya really wanna proof the tune before you blip it and make sure there's no errors in the song somewhere (not to mention the fact you need to be creative in some cases to find the song you want....and even then it's a crap-shoot) and the others aren't hearing your song right now, but you also don't get people harrassing you while you're on the mic (no mic so they can't) and in the 2 months I've been actively blipping, I've yet to see someone say they hate a person's taste in music. You don't like their music, you just don't click play...better yet, don't follow their station. I've put a thingy on the sidebar that will allow you to play my last 25 blips. I wish they'd get something on site that would pop the blip up on my blog when I blip on the blipper site. I may have to get a Twitter account and see if it'll scroll them live on my page. As it stands right now, you kinda need to know when I'm on and refresh the blog page. I'm really workin on it so peeps can come to my blog and hopefully hear me at least somewhat "live".
Oh...and we got some news on that other front. I'll put it in the Journey to Parenthood blog as it' snot really fit to discuss such matters in this blog.
posted at 5/19/2009 04:05:00 AM

Oh crap. Not another thing to suck away my time! And I'm such a sucker for those kinds of things.

AI tonight! YAAAAAY! I'm looking forward to seeing what these two have up their sleeves!

Hope your having a wonderful week!

I do good to keep track of blogs!

Gonna check out journey. Huggsssss there.

This was a marathon entry for you lol.

Im not the gameing type either, the only one that gets my attention is the flying ones. My buddy has one that has an airport right here in maine that we both now well.And it has all the out laying towns , the airports there and such. I can land and take off great with it.flying has been a great interest of mine for years.The only thing that kept me from getting a pilots leicence years ago was that fact that i drank ,and i knew ME..flying and drink Dont Mix..so i never did, however i havent had a drink in over 9 years now and havent smoked either. Theres a guy that has joined the legion and He has a plane. I went with him for a ride a few weeks back and he said . i'll take her up and you (me ) can bring her back.I mite have him give me flying time so i can get a solo leicence to fly now. . Jr

I'm finally caught up on the blogs!!!! Only took me 2 weeks, lmao. But I will admit I got a new addiction right before vacation, and that found a way of sucking up most of my evenings, instead of blogging.

One of these days, I'll figure out that blip thing you're talking about.

Goodness, do your days consist of 24 hours too?? Because it seems like you have a lot of time on your hands to do all this. Maybe NYC time runs as fast as its walkers because I don't even know where my time goes! Off to your other blog to find out the news.

If you are HAPPY, then it isn't a waste of time!!! When I have to be conscious of time but doing something I love (STAMPING!!) I set a timer so I can stay on track. It's nice to float away when you're doing something fun though!

I'm too busy finding nice shiney new pennies to leave for ya to do ALL that!!

I hope you are feeling better and better too!

My hubster plays that Age of Empires game too. I have no idea how to play any of the games he plays!

So what d'ya think of idol? I thought Adam had it for sure!