I'm pretty sure I've mentioned it a couple times before. In case I haven't, I'll say it again.


I am sooooo incredibly spoiled.


I have some of the best buddies in the world. Considering I have friends in at least 4 countries, I don't feel that's too much of an exaggeration. It's not, is it? Well anyhow, in the days leading up to "F-Day" we started with a kick-ass party over at iggy's blog, where a rowdy time was had by all... especially by a certain stoned OCHA, who will remain nameless in my blog, that professed that what she was smoking was for "medical purposes only". Well, at that was her story and she's still sticking to it.

Then on Saturday an envelope showed up from iggy with not one, but 2 cards in it. The post-it note enclosed said that he couldn't decide which one to send so I was getting a two-fer. I have to laugh because apparently I did a very good job of hiding my "natal day". One of the cards got signed with a smiley face sticking its tongue out in a :P~~ fashion. Must be because I wouldn't give up my birthdate. So? I'm just a little sensitive about my age, even if it IS only a number.


Our truck was still in the repairshop and since they close before hubby normally gets out of work, well he had to leave a bit early. He swung by the shop in the early afternoon, on his way home from work. They didn't have it done yet but they were looking at about another 30 minutes or so. YAY!

He told me how long it was going to take for the truck when he got home and I started to get ready. I can usually be ready in about 20 minutes or so depending on where we're going. He went downstairs to take the pooch out while I finished up. When I came downstairs, imagine my surprise when I see the most beautiful bouquet of flowers and a card sitting on the laptop waiting for me to notice them. 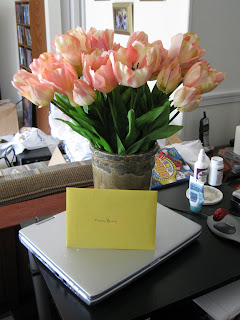 They are the most GORGEOUS shades of pink and peach. Who cares if they're artificial? They're not the cheesy fakes either, they look real from a distance. He said he figured he hadn't gotten me flowers in a very long time (and he hadn't) and that I'd like these better because they wouldn't die off in a week's time. Have I ever mentioned that he's got the most exquisite taste when it comes to stuff like this? 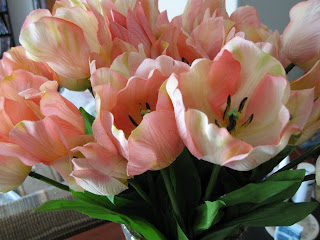 He gives me these gorgeous flowers so I figure that the card's gonna be one of those mushy ones that he's prone to getting. Nope. My baby knows me too damned well. 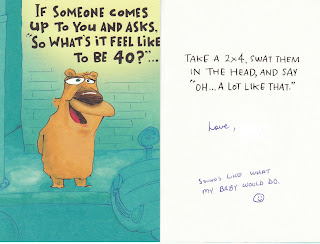 It was a beautiful day out. Not too sunny, not too cloudy and plenty of sunrays poking through the clouds.I think they look so pretty like that. 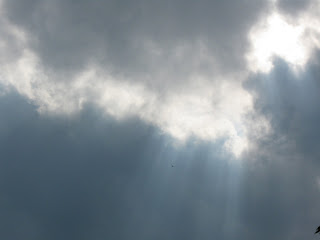 I glanced over at our neighbor's yard on our way out and saw the prettiest rose sitting right by the fence so I grabbed a snap of it. This is the adjusted version of the picture. I saturated the heck of it to get the colors to pop. 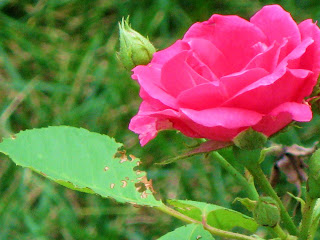 Our first stop was to the repair shop (remember it was supposed to be 30 minutes from the time he left there the first time and it took me about 20 to get ready and another 5 or so to deal with my pressy), figuring that the truck would be ready... right? Nope. They were doing a second flush on the radiator because it was so yucky and there were a couple last minute things to do. We ended up waiting 90 minutes for them to finish up. I won't grouse though because it was exceptionally busy that afternoon AND they HAD let us borrow the company truck.

Hubby took me to Chili's for lunch and then we popped over to Michael's to check on some craft items I'm wanting. Unfortunately, they don't have anything for Christmas out quite yet and the stretch canvases aren't in the size I'm wanting. In fact, they don't have a single square canvas. All rectangular ones with a few round and oval ones. I guess I'm gonna need to go to JoAnn's this week and check them out. I know from their web site that the fabric I'm looking for is carried there, now the question is if they have it in stock. I also noticed that they had the square canvases. They aren't in the size I'm wanting (16"x16"), but there's only a 2" difference (18"x18") and I'm hoping it won't look too bad. I think I'll just buy one and hang it on the wall next to the others to see how it looks. If it looks bad, I can always do something else with it. I've got some ideas floating around anyhow. I really hope that they have a head start on the Christmas ornaments too. Either the glass or the flat plaster ones would be nice right about now.

When we got home, we just chilled. Well...and I painted my nails 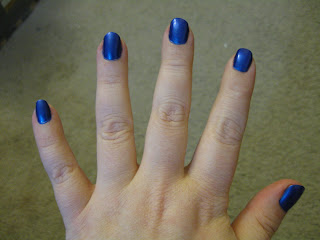 When I got up the next day and started catching up in the blogs, I found a very nice surprise on Alice's site. Since her blog is private, I'm not going to leave a link because many of you won't be able to see her page anyhow. However, with her permission, I've done a screen cap of the entry that I saw the next day waiting for me.

Ooooh and today? I got a wonderful handmade card in my favorite color (PURPLE) from my friend Queenie Jeannie. So considering the festivities started in iggy's blog on Tues the 28th and I got my card from Jeannie on August 5th...my birthday has lasted over a week!

Yes you are spoiled but it's fun spoiling a princess like you!! :-)

Those are the best birthdays! I mean...birthweeks!! :)

I just love Jeannie's cards, aren't they amazing? And Iggy, gotta love him!

Those flowers really are nice. And two cards from Iggy? I am so jealous! And then a card from Jeannie... yep you are definitely spoiled. Definitely. But you deserve every single nice thing that came your way.

Looks like you have a lot of friends who wish you all the best, Styxie. *hugs*

Love the blue polish - that is my favorite color of all (so we are a little different, that's what makes us so much fun! ;-)

I love how you called it Glambert Blue. LOL

How does everyone get everyone's address? This is so interesting to me.

Answering the rest in email if I have your addy as has been per my usual. However, I wanted to put this part in so it's not construed that I'm taking credit for something that I didn't create.

I'd originally called it Adam Lambert blue because it was similar in shade to what he'd wear. Then a friend of mine (the darling Chicagolady who seems to keep turning up missing) referred to it with the nickname for him that had been floating around during show time. I've just since adopted it.

Sounds like you had a great Birthday week...
Love the blue..
Thanks for stopping by..