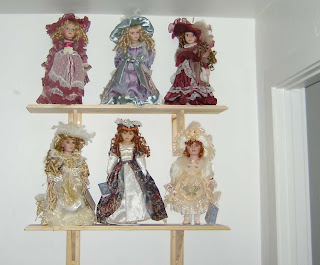 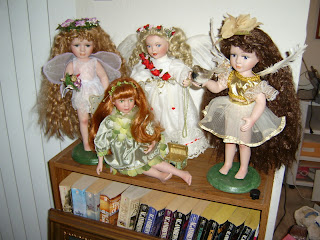 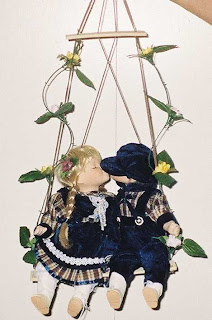 I promised in a comment on this morning's entry that I was going to post some more pix of my dolls. The pair on the swingset were the first ones that hubby bought me when I moved to Texas. I'd had to leave nearly all my others behind when I ran in 2003. The one in sage in the backrow of that other pic this morning was one I managed to save by sending out a window to a friend to hang on to while I travelled. Another that I attempted to save in the same manner got broken while the doll was waiting for me to find a new home. Sad as the one that broke meant alot to me.

Anyhow, in the bookcase one...the fairy in purple and the one in yellow are full-body porcelain dolls. Kind of rare as most places put porcelain heads, hands and feet on a cloth body. Those two were ones I got off EBay for like $10 a piece (awesome deal Im telling ya). The one in green sitting and the white angel behind her in the same pic were from Paradise Galleries. The bookcase and swing pix were taken in our last place.

The picture above with the 2 shelves was taken here in the house. The gold and apricot dolls on the bottom were bought in a grocery store and a Family Dollar type store respectively. The doll on the top left was bought in a truck stop while travelling one year. She was gotten shortly after I bought the one in light blue and the one in maroon on the right. I couldnt believe how close she looked to those two and she wasnt even the same company. They and the one on the center bottom spot were all EBay purchases as well. I must have at least twice the dolls now than I did before I left. If I could only find a replacement for the one that broke. That company is out of business though and the doll is rare as anything. I've yet to see her anywhere online.

Today's PT was an early appointment. The sessions are going well. This one was working the soft tissues on that side. He says I have a bit of built up muscle over on that side. No surprise as that's the side I always carried my books on in school and that's also the side I carry my purse on. Nowadays, my purse isnt quite so heavy, in fact the only time it bothers me is when we travel and I have not only the usual (cell, glasses, wallet and all my change) in it but a camera, batteries and extra discs. It's not like a few years back when I carried not only my own stuff but idiotboy's crap too (yeah....slave, whipping boy and pack mule...gotta love it). Anyhow...Im feeling looser on that side. I have a feeling that it's always going to bother me some....just the next thing to fall apart on me. Ah well.

While we were out after PT, we made our trip to Wally World. Figured we'd better get it out of the way before he had his appointment as we didnt know if he was going to be laid up after or not and we really needed to put some food in the house. While at Wally World, I did pick up the Constantine cd. I havent listened to it all the way through yet, but I'll do that while Im ripping it to my computer for streaming use. I'd do it right now but Im double browsing and listening to the music on my front page ;). Sounds like a couple of the files need replacing again. Time to find a place to upload my own tunes so I dont have this problem anymore.

When we got done shopping and came home, I checked the phone handset in the kitchen to see if we missed any calls (the phone has 3 handsets...the main unit is in the office...the other handsets are located in the kitchen and the bedroom). Instead of going to the office to check the answering machine, I simply redialed the one call that had come in. It had come up as Health Central Woman on the id so I figured it was someone from the obgyn for me. This had me worried because they never call with good news...only bad. So I call them back and they answer something about a urologist. Of course considering that it had said Womans Health on the id, it kinda threw me and I asked her to repeat it again at which time I realized it was for my hubby. They wanted him in right away for xrays. We got the spoilables put away and ran back out the door to the urologist's office. Got the xrays done and then the dr saw him. Unfortunately the xrays didnt show much conclusive so they're going with the CT readings. The urologist's office will be calling back on Monday with an appointment later in the week for him. He'll be going to the hospital Im guessing and having one of those noninvasive procedures where they strap some gadget to him and his vibrates and shatters the stone. He was told that this procedure is 80% effective. If this doesnt work then they'll shove him in the hospital and remove it that way. You gotta love these damn HMOs that make you jump through hoops. Personally, if a patient comes in with abdominal pain and something of this magnitude is suspected, I think the drs should be allowed to automatically send the person in for the tests that day. None of this "wait and see" bullshit. If they'd just done that Monday when he went in in the first place, they would have seen how big it was and dealt with it right then. He'd be recovering by now. Ohhh no, let's "wait n see" if it passes. Well GEEEEEEEEEE it's 12MM (nearly a half an inch for us non-metric folks) in diameter, no normal sized man is going to pass that without a shitload of help!! So now my husband has been on painkillers all week and wont get any damn relief until the middle of next week unless he breaks a high fever and the pain become unmanageable....then they'll take him at the hospital and deal with it. Does this make any sense to anyone??? Me neither. Nope...sent him out with another pain medicine which is actually weaker than what they'd sent him off with before. Go figure. Do I sound bitter? You betcha. Are they going to have a helluva lawsuit on their hands if anything goes wrong? Hell ya.
posted at 8/10/2007 07:21:00 PM

I sure do hope everything works out okay. Sorry to hear Ranger has to deal with this pain longer than he should be. Doctors and insurance companies (and pharmaceutical companies too for that matter) have a racket going big time.

Very nice doll collection you have there.

I hope everything works out OK for you.

Your dolls are beautiful!

I hope Ranger is feeling better soon. I can't say I know what the pain is like when you have a stone, because I've not had one, yet.

One question though...what will vibrate when they strap a gadget to him? And is it battery operated? Bwahahahahahaha

~wicked grin~ @ Chicagolady. Are we sure it's batteries? Could be a plug in ya know. As for what's vibrating...so long as it dont fall off, I'll be happy.