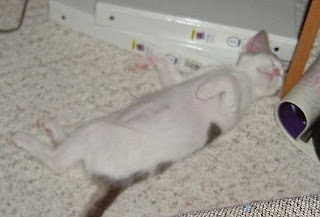 When we got to the admittance desk, we were greeted with a cheery "Good Morning~". I told (more like snarled) them I'd give credit for it being morning (I had to as I knew the hour was an a.m.) but as for it being "good" not a chance. The lady behind behind the counter said that it was ok because hubby had left a message and at least we got there. How nice of them. Here we are, a half hour late and we didnt have to wait. I thought they were going to need that whole time to get him sedated and stuff, I guess not.


I knew it was a one hour procedure so I wasnt expecting anyone out much before 730am but when it got to be 8am and I didnt see a dr or nurse, I started to get worried. I worried even more when the parents of the patient to my left had some one out not once , not twice, but at least 4 times between 745am and 805 am. Hmmm. Hubby's good buddy from work (the dude that works the opposite shift from him...the one he covered for during that one month) showed up to give us a ride home afterwards. They called me back to see him about 830am or so. Ohhh there's my baby! He looked SO much better. I could tell with the coloring and sense of humor alone. He was already grousing for his clothes because he was jonesing for a filthy weed (bah...I dont know how anyone can put one of those in their mouth..*BLEAH*). While visiting hubby he was telling me that they'd injected him with dye and xrayed him again. Are you sitting? This second set of xrays showed precisely what the first ones did a few days ago....BUBKUSS. Here he's sitting with the internal equivilant of the damn Death Star 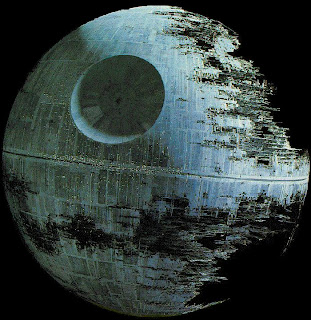 sitting in his body and they COULDNT FIND IT!!!????!! They ended up doing precisely what we hoped they wouldnt have to do. They had to scope him. I see everyone crossing their legs...particularly any guy reading this. Needless to say, he's a hurting puppy right now. The doctor wants to see him next week to double check and make sure they got it all. He said something about more xrays. Now why the hell are we doing more xrays when the buggers didnt show up the last 2 times?? Anyhow it was explained that sometimes a large particle splinters down and doesnt always turn into a small stone or powder during this procedure. So he gets to spend the next week panning his urine with this cute little strainer to catch the particles coming out. They want to take the stones and see what's going on to give him these stones as this isnt the first time he's had stones, just the first time he's needed help passing them. Now it's going to cost the insurance company 1-2 CT scans, 3 sets of xrays and extra medicine for pain when if they hadnt tied the drs hands. They could have saved themselves the extra set of xrays, an allottment of pain killers and a CT scan if they'd simply allowed the doctors to do what's needed in the first place. No, Im not over that yet and I doubt I will be for a while. It's just so frustrating.
posted at 8/15/2007 08:04:00 PM

I'm glad to hear the procedure went okay...hope things go smoother from here on in.

You and me both. Praying there wont need to be a procedure to get anything extra. Bad enough he had to go through this in the first place. A secondtime around and you can me assured I'll be a WHOLE LOT more unhappy about it.

"Leash my tongue and staple my lips" LMAO

I'm glad Ranger came through the scope ok, and I hope they got it all. Don't want to see him or you have to go through all this again.

He did well yesterday and is doing well today. He says it still hurts a little though, but it's gonna for a bit til everything passes. The "fun" part is "panning" for the stones (they have him passing water in a filter cup, and saving the stones for analysis).