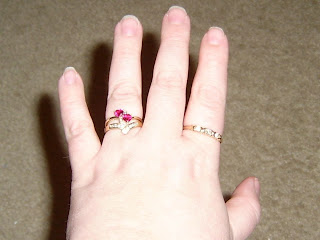 Here's a pic of the rings I mentioned in my last blog entry. The one that is on the index finger was originally bought as an engagement ring for Christmas 2005. It wasnt even close to what I had my heart set on, but he wanted me to have something for that all important finger. The plan was to use it as an engagement one and then buy one closer to what I wanted and use the first one as a wedding band (this is the ring I had resized recently..it's a hugs and kisses ring with diamonds in the hugs positions). We went shopping around Valentines Day 2006 because we saw one that was even closer to what I wanted but when we got to the store, the particular model I was wanting (a single ruby heart with diamonds on either side) was all sold out and they werent offering rainchecks. *sigh*. So hubby picked out the one that's on my hand right now. It's kinda close enough, still not what my heart was truly set on, but close enough. At least HE bought it and didnt take an already existing ring of mine to resize and use (if that doesnt sound familiar...take yourself over to my Padded room to see whom Im talking about). It is part of a set that included earrings and a necklace. I hope to get a chain I feel comfortable in to replace the one in the set for the pendant so I can wear it for special occassions. I've yet to get a good picture of that ring...no matter how hard I try. It's two ruby hearts with two diamond flecks on either side of them. When I tried the ring on my pinkie finger (they only stocked 2-3 sizes and those of us with bigger fingers had to have it resized...stupids) with the already existing band, I realized it was gonna look wonky. As such, I decided it might be best to find a "V" band to act as the wedding band and maybe use the first ring as a "capper" ring. Well as a capper ring, it still looked freaky so I've opted to resize it so I can wear it on the same hand as the others. I didnt buy it and it wasnt a gift for a friend so it really shouldnt be treated as a right-hand ring. This next picture on the right is closest to the one I really Really REALLY want. When I first moved to Texas, hubby and I were in the local WalMart and my attention was drawn by the little table they had set up of costume jewelry. The one ring that got my attention the most was one that looked like that one to the right, but the only difference was that the one at WalMart was done with a yellow gold plated band. Granted it was only $9.97 or so, but it was the first ring he ever bought me. I wore it proudly daily until it got to the point where the acid in my skin started eating away at the gold plating and tarnished it. He was going to bring it to a jeweler's that was connected to his work and see if he could have it custom made in 14k yellow gold with the genuine sapphires and diamonds. Somehow, between the time he'd decided and the time he got around to asking a jeweler...the ring got lost. I usually kept it in a shotglass on the kitchen window sill, but I know a couple times he'd had it in his pocket to remind him to check on it. We think that he'd had it in his pocket and it fell out. I was terribly upset when I realized it was missing because it was the first piece of jewelry he gave me and ...well fact is, I have a terrible track record with rings (the more expensive the piece the worse the record gets...). They're forever getting lost. I was miserable for days afterwards when it was lost. I thought for sure while we were packing that it would turn up and it never did.
posted at 6/19/2008 11:31:00 PM

I don't know much about rings and what not - but with your wallpaper background.. you get a neat effect if you size the window just right and scroll the center of the lightburst behind the blue heart ring.

I have a simular sort of track record with necklaces. The first piece of jewelrey I got from Kelly was a small gold heart on a gold chain with the words "I Love You" engraved in the heart. I was SO careful with it... But... I lost it! The chain snapped (like all my chains do after a while) and the heart fell to the floor (along with the pieces of chain). I found all the chain, and the little cat pendant that shared the chain, but not the heart. We searched, and searched, and searched. But, no heart. I felt awful afterwards.