The first words coming to mind are "Not much is going on over here", however I know better than that...shoot YA'LL know better than that. I know once I get writing...well let's just say we all know that's not going to be the case. *laffz* So go get your last potty trip out of the way, grab a drink and a sammich ...because I suspect this is going to be one of my usual marathon ones.

For the last little while hubby's been complaining about his foot hurting him. It's the same foot as last time and the pains started the same. We both knew exactly what the pain was and some of what aggravates the condition. By Thursday last week, he came home in such pain that I just looked at him in that way I have. You know what he said? *laffz* "Yeah, I know, I told the boss I wasn’t going to work tomorrow and that I'd be going to the dr's first thing in the morning". Heh heh heh. The kids at the school I worked for in New Orleans always did say I had "that look". The same one their moms would give them when they did wrong. I guess I haven’t lost my touch. *gigglez* Anyhow, he went to the dr’s, they diagnosed the gout, put him on some meds and told him to stay home (the side effects of the medicine would make it impossible to work in a “clean room”). There was supposed to be a follow up visit in 7 days but since I was already scheduled for an appointment on Tuesday, that's when he went in. The dr had x-rays done just to make sure there wasn’t anything else going on in there. The dr told him he needed to stay out of work for another 2 days so Friday was his first day back in a week. He’s been taken off one of his allergy medicines because it’s known to make hearts race. Well gee…he’s on high blood pressure meds; maybe he shouldn’t have been prescribed it in the first place. Ok. I can’t blame this doctor for that because he’s not the one who put him on it. The dr has also told him that he needs to go back to decaf and he doesn’t like that much because Mt Dew runs in his veins. It seems like every time he gets the gout it’s because he’s been hitting the Mt Dew and salty snacks pretty heavily. I keep telling him that he should quit smoking and then he won’t need the salt on everything. As for the Mt Dew, he really needs to drink more water or decaf coffee. For the week that he was supposed to be home and off his feet, we decided that it would be the best idea to just keep him downstairs. There is a lot that he can do downstairs while seated with all the books and DVDs we have. I also brought the laptop downstairs so he wouldn’t be without internet, although he couldn’t play his online game….ah well. At least he had a way to check his emails and work his MySpace if he wanted to.

Since hubby was home for the week and for the most part grounded to a seated position with his foot propped, I spent a good deal of my days downstairs as well. Some of the time I spent working on that sampler that I had started before we moved (which I put down the minute we were in this townhouse and I had access to my computer 24/7 *laffz*). I’ve got almost all the border done but ran out of one of the colors so I’m separating the rest of the floss skeins and getting them cut down to manageable lengths before continuing work on the piece. Once the border’s done, I can finish up the interior of the piece. While downstairs, we watched a few movies. We watched the Bucket List with Morgan Freeman and Jack Nicholson. It was a sad movie due to the subject matter and the ending, but it had quite a few very funny moments. One in particular was when Morgan’s character is re-admitted into the hospital and Jack’s character pops in for a visit. You see, there’s this particular very rare coffee that Jack’s guy raved about and insisted on drinking. Well Morgan’s character found out what it was made out of and printed a copy of the article that discussed it and had it with him for when Jack’s guy showed up. He handed the article to Jack’s character and watched as it was read. The look of shock on Jack’s guy’s face and Morgan’s character laughing until he cried was absolutely priceless. We also watched A League of Their Own, Water Horse (very much like Free Willy) and a few others I can’t remember.

The week before hubby had his problem flair up; I spent a few days watching several other movies. I’m a real sucked for animated movies so I watched Monsters Inc, Brother Bear, Finding Nemo, and The Emperor’s New Groove. Ok, ok, so I’m a kid at heart! I did catch one movie on TV that simply moved me to near tears. I very rarely cry during a movie, although I do come pretty close. The only 2 times I cried (actual tears falling and not just welling up) while watching 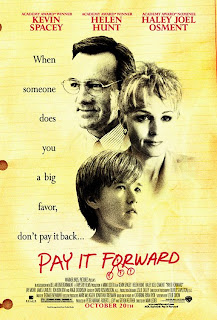 a movie wasn’t exactly because of the content (one was a comedy for goodness sakes!) but more because of a particular scene triggered a memory or an unfulfilled want/feeling/desire. Well the one that came really close this time was Pay it Forward with Kevin Spacey, Helen Hunt and Haley Joel Osment. It is a very touching story about a teacher who gives an assignment for extra credit to his class and the child that uses his imagination and runs with it. Over the course of the movie, the idea takes off and reaches farther than anyone could ever imagine. The child, who only sees the failure of his own attempts, never realizes how much of an impact his idea had on others. That is, until a reporter who was helped in ANOTHER CITY tracks the story backwards from the executive that helped him, to a prisoner, to an old lady living on the streets (that just happens to be the boy’s grandmother)…that just happens to be going to the boy’s birthday party and invites the reporter over. Suddenly, everyone realizes just how big his project got. The ending is very much a tear jerker (ok ok…one did leak out).

I think I’m going to leave this entry right at this point as the rest of what’s been going on is pretty much a whole entry on itself. I will leave you all with these questions. Have you ever cried while watching a movie? What was the movie? What was going on in the movie that triggered the tears? Why did it make you cry (what was the memory or the unfulfilled want/feeling/desire the scene triggered)? I’ve got two that I’ll share if you’ll share yours.....

Well, being a guy, I'm not supposed to cry while watching movies :) but I will admit to getting shiny-eyed - takes a pretty powerful movie to really shake me - but I can enjoy good ones - Let's see... My shiny-eyed list (in no real order) is:

My list would definitely be different than Iggy's, lol. I have cried during a LOT of movies.

Pay It Forward is one of them.

It's not so much a specific memory or unfulfilled want/feeling/desire, it was just the sad endings. I've had enough deaths in my lifetime, that seeing them in movies always moves me to tears.

I'm sure there are other movies I can't think of, but I think you get the idea.

I missed one, "What Dreams May Come" with Robin Williams.

I've not seen any of the movies on Chicago's list - so I've a few to see now (including Ironman and a couple batman movies)!

It's not just me who sees the simularity in "The Water Horse" and "Free Willy" then? LOL!

I'm afraid I'm one of the soppy ones who at least gets misty eyed during any emotional scenes in any movies. If it's soppy or sad then the tears will at least start to well up. I even cried near the end of the 1st Harry Potter movie (at the bit when Harry comes out of the hospital wing and Hermione says, "never better!") and at the part when Hagrid comes back in the third Harry Potter movie. I know, I know, I'm a big baby! LOL!

And, btw, the animated movies you mentioned... I love those movies! I've seen most of them at least two or three times. And if you think those are kiddy movies... You should see some of the things in my DVD and video collection. LOL!

My list would be too long for even a blog. I cry easily and the strange thing is that hubby is usually crying before I get there.
Pay It Forward
Message in A Bottle
Rain Man
The Bucket List (loved that movie)
Music of the Heart (Meryl Streep)
Bridges of Madison County
The Notebook

What triggered the tears? Any kind of emotion - happiness, sadness, fear - you name it. Heck, I cry in church on a regular basis - people just try to ignore me, lol

I'm glad I'm not the only very soppy person around here. LOL!

I would have a big list because I usually cry at some point in almost every movie I've ever watched. (i dont watch horror movies so dont need to worry about those)

I just remembered one: Ghost. Man I bawled at the end when he's all glowing and they kiss, and then he fades away.