A little bit of nothing aka just sharing pix

So not much has been going on here. Well...if I go into the last couple dr appointments, you'd think I was really busy that's for sure. I'll save those for another day.

As you all know, I *generally* have my camera with me while Im out and about. I must have taken a good hundred or more over this last month or so and for the first time since we've moved here, I've actually managed to capture images other than the iggy-type pix. 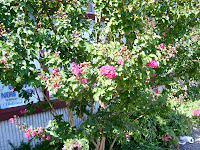 There are several of these small trees (pictured left) outside the IHOP entrance to Manassas Mall. A few weeks back it went into bloom. Although flowers in general aggravate my allergies, I thought the flowers on this tree were very pretty. I got this shot just before the tree was in total bloom. If Blogger will let you click and increase the size on this, you can see some of the tightly closed buds behind the ones that are bloomed out.

The picture to the right has a tree with what looks like dead leaves on it. The bank that I go to has about 8 of them bordering its property. Upon a closer inspection on our last trip there, this Wednesday, I noticed that they werent leaves at all but a 3 sided bloom. The bloom itself looks alot like those three sided nuts. For the life of me, I cant remember what they're called.

This picture on the left was one I took a few days ago. The plant is in my neighbors yard next to his front door and hangs over the wood fence between our two yards. I had taken to ignoring it because as far as I'm concerned, it's a weed. However, a couple days ago I saw some movement near it. My first reaction, after seeing what was flying around the blossom, was to run away as Im afraid of certain insects...particularly ones that fly and can do me harm. In this case, the first thing I thought of was this awesome picture I had seen online of a bee hovering near a flower. The desire to attempt to get a similar picture overrode my usual fear of the insect and I clicked this shot. I more than likely wont get a great shot like this again because I doubt that the need for the picture will overcome the ingrained fear...but you never know. 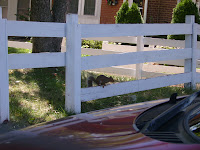 The last picture Im going to show for tonight is one that I got on the same day as the bumblebee picture. I had just gotten into the truck and fastened in when I looked back over towards the townhouse (you can just see the bay window in the background of this picture) when a little bit of movement caught my eye. There....on the fence was a squirrel. My reaction (slowly grabbing the camera and firing it up) caught my hubby's attention and he looked over. When he realized what my target was, he slowly climbed in the truck and waited until I was done. I brought the camera up and very quietly asked the squirrel for permission for a picture and snapped the shutter. The cheeky little bugger just sat there so I asked for one more (with a please) and zoomed in for a really nice shot. The second shot was cropped down and the result is sitting up in my banner right now.
posted at 9/05/2008 09:00:00 PM

Oh... Iggy's gonna be cursing something rotten when he reads how easily you got that squirrel pic! LMAO!

You did better than I would have with the bee pic... I'd have been so out of there! Not because I'm allergic to the stings, but because I don't like them. I think I've mentioned before that with insects and stuff like that is the only time I'm a proper girl (in other words... A whimp! LOL!)

I am amazed that you got close enough to get the bee picture. Kudos on a great picture.
*shakes my head at the squirrel picture* I wonder if Iggy every thought of saying please lol.

Wonderful pictures..Very pretty flowers (cept those at the bank..I personally thought they did look like dead leaves) and you must of been very quiet not to scare the bumblebee off. Congrats on the squirrel picture! It's awesome!

Great shots. The one of the bee is really neat. You done good! And I think the nuts you're thinking of are Brazil nuts (also known as nigger toes). Terri loves those things.

When I have settled my debt to squirrel-kind and can carry my camera again close enough to take pictures of them, I'll remember to ask please - even with the sugar on top. Gonna be a very long year of waiting for me though.

And Lent will be doubly hard - since I give up taking pictures of OCHAs then...

The pictures are really nice - the "bee flower" is really a good shot!

It's hard to tell because I can't see what the shape of the entire plant, but the flower with the bee looks sort of like a columbine flower. I could be wrong.

Wow, you asked before taking the picture of the Charlie? I've never had to do that. Maybe they just like me? LMAO

I love Brazil nuts, my dad and I used to fight for those when I was a kid.

Tori: I usually steer clear of the bees but the shot was just too nice to pass up.

punkn: thank goodness for zoom lenses. It may have been up in the tree as i went past to our car. There's just the one car between me and the critter.

Karla: yeah...Im not fond of them either, just found them interesting.

Alice: Yeah those were the nuts I was thinking of. At first glance that's what those blooms (?) look like.

Chicago: I'll try and remember to get some shots of it tomorrow so you can see the whole plant.

Never said I HAD to ask permission...just the fact I did. I figured with that squirrely war the pesty guy started, it's better to be safe than sorry.