This week one of my new bloggy buddies, Pam (http://thedustwillwait.blogspot.com/), is hosting the Fun Monday game. This week's subject is:
Show me in pictures or tell me in words what defines the place where you live. I want to leave the interpretation open to include any possibility.
She went into detail as to what she meant in her post called THE DUST WILL WAIT: Invitation: Play Fun Monday on February 9 . Boy did SHE open a can of worms because she really DID leave it quite open for interpretation! I can hear some of my usual readers groaning at this point because they know me real well. You leave a little loophole and I'll open it nice and wide (case in point the Letter Game which resulted in a multi-entry arc on the letter M). I promise...I will NOT do that this time (although with all the moving I did Im sure I could do several entries on just this topic). I will, however, dissect it in my usual obsessive way. Starting right with the subject itself.


The two verbs I'll be concentrating on are:

Define: (v): To describe the nature or basic qualities of; explain
(Im using the 2nd definition of the word as it's the one that best fits this situation)

(4-6 used as that is what Im beliving her to mean for the assignment...4 will stand alone while 5 & 6 will be combined)

as well as this noun:

place: (n):
1. a. An area with definite or indefinite boundaries; a portion of space.
b. Room or space, especially adequate space


2. a. The particular portion of space occupied by or allocated to a person or thing.
b. A building or an area set aside for a specified purpose


3. a. A dwelling; a house:
b. A business establishment or office.
c. A locality, such as a town or city 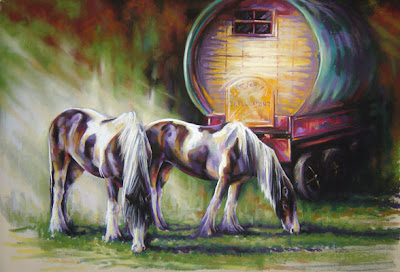 That all said, I could just wuss out and post a picture of the town I presently reside in ... as the running joke in my family is that I actually live in a gypsy caravan (and live everywhere as well as nowhere at the same time). I spent a good deal of my adult life on the move and everyone pretty much puts my address and phone number in pencil because they changed so often. To be honest, almost anywhere I hang my hat (not that I normally wear one, but if I did) is home enough for me. But this isnt about where I call home, this is where I LIVE....which is another story completely. 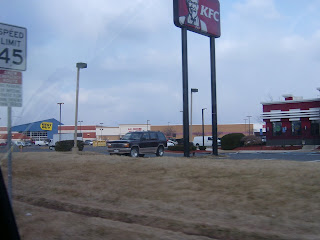 I could also just put up pictures from Google of the battlefield or the museums, but my friends all know I won't do that. For one reason, I really have no interest in being in any of those locations and for a second reason...it's simply just too easy (who wants to use Google when they can use the pix they actually clicked while out and about?). Besides it doesnt show the Manassas I see day to day. The area I exist in is mostly businesses, strip malls, restaurants and townhouses (not to mention vanity plates that are seen on every other vehicle!!). Even with the economy the way it is in this day and age, we have sections of expansion. 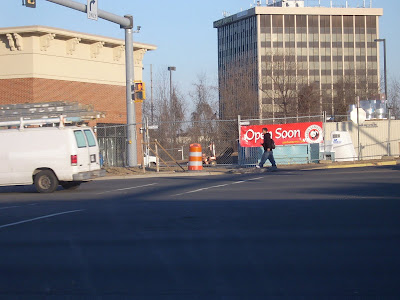 On the road in the picture above, we have a new Walgreens, Panda Express and Chik Fil A being built. I suspect there will be another business or two going in sometime in the future.

The townhouse that I'm presently occupying, well at least for the next 18 months or less, is situated in a cul de sac behind one of the many strip malls on the main road in the area. We are definitely in the minority racially in this neighborhood. The neighbor in the unit to the left there is the one Im continually griping about. The neighbor to the right (in the grey townhouse) is really nice. I bearly even know when he's home. I can't wait to move though. Im hoping we get into an actual HOUSE on property without the neighbors so darned close as I feel like a sardine in this place (even though technically this place has more square footage than the house in Texas did).

Although that picture alone would satisfy the goals of the project, it's not truly where I LIVE. My closest buddies (that have known me for roughly 5 years and in some cases a bit more) know that where I LIVE is truly in a much much smaller place. I love music and working on decor for my places online. So realistically, I LIVE here: 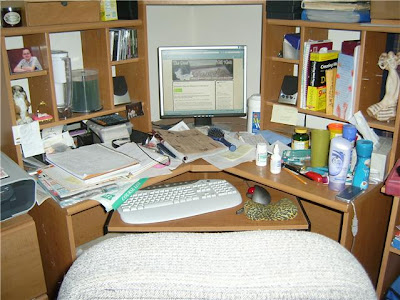 Yeah, it's perpetually a mess. I just like everything within arm's length because I never know when Im going to need something. I must have about 3-5 projects running at all times in the place where I live.
posted at 2/09/2009 07:00:00 AM

I especially loved the last pic. There's no place like home, is there? :) Music is a big part of my life, too, so therefore, I sit here at my computer hours on end listening to, and acquiring more, music.

I hope you and Ranger find a real nice house with a big back yard someday. *hugs*

I probably would have posted the last picture - that is definitely the place where you live. If I were to play the game (which I'm not...) I'd post a picture of my kitchen, my herb garden, and the loft (embroidery business). That was a nice share. Hope you are feeling much, much better!

I do believe you "nailed" this question. :)

Nice description of your home. Some day you will get that big house with all the amenities you need and want...Myself, I just have a house with no area of my own. The den is Bill's with the TV, this room is my son's (it IS his computer afterall) so I just stray back and forth between the two.

Chik-fil-A? I would be in HUGE trouble!!

I'm glad to see my desk is not the only one a bit cluttered! ha ha

Like the old saying is, home is where the heart is.

Whew! Now I don't have to feel bad about my desk anymore, lol! Hugs!

i hear you about the townhouse. we are having multiple problems with our upstairs neighbors in our apt complex. two nights in a row it seems they have decided to drop things. sat night it woke up us and the baby (pissed me off) and last night the baby slept but hubs and i were awake for hours because people were up there stomping, throwing things around, and yes, it sounded like grown men 'wrestling' including cheering sections. from 1-2 a.m. that was just the wrestling. the rest started before 10 pm.

You and me both Alice. Even though I stopped streaming, Im still a media fiend. Someday we'll have our house again. Right now the one we really want doesnt exist yet and I suspect it's just going to end up being a pipe dream.

Feeling better, thanks Punkn. I would have expected a shot of the loft for sure from you.

I know what ya going thru karla...all too well. Had the roof over my head and no space of my own for many years...

I hear ya Carrie. If it wasnt for the eating modification I was doing, I'd be in ALOT of trouble too as I LOVE my Chik fil a!

Welcome Karmyn! You know what they say, a full desk is the sign of a genius. *hmm a private blog...gonna have to hope she comes back to get this comment...*

Welcome Janis! Yep...it sure is. Nice blog you have there, I'll have to pop in and visit now and then.

Welcome Lil Mouse! Apts...*BAH* I never have luck with neighbors in an apt. Best bet is to contact the rental office and complain. Get everything down on paper and if the rental office wont fix the problem, take it all to the BBB.

*Grins* As soon as you started talking about how it was left open, and how you stretch small loop holes wide open, I knew you'd do something like that. LOL!

You know me too well Tori ;)

I think you need a plant on that desk .. .you know for a little oxygen ha ha ha.

fun fun post - and pretty much what I'd expect from your crazy mind.

Interesting and here I was getting all excited about seeing your "gypsy caravan"! I so want one of those!

I don't think I could live in a townhouse. I need a little space around me and no shared walls. Even then, it's not always enough!