So while we were out several weeks ago, I noticed a building that we must have passed several times over the 18 months or so we've been here. Actually, considering I'm at the dr's office once a week, it's more than just several times. When we first moved into the area, it used to be an Animal Clinic. Sometime in the last several months (probably a good 6-8 months ago), the clinic has closed down. Since then, it's taken a rather forelorn and neglected look. The day this picture was taken, the first thing I thought of when I saw it was the fact my account at Blogger has much began to resemble it. The pages don't get freshened as often and the entries...yeah right. We all see how that's been. *laffz* Now ya see why the building reminded me of my blog. Both are in desperate need of love and care. 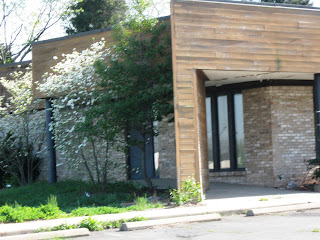 Although several businesses have closed down around this area, but we've been seeing expansion as well. The furniture store that closed down in the strip mall behind our townhome is in the process of being taken over by the second hand book store, McKays (which is presently in the same strip mall but in a much smaller location). It's good to see that their business is doing so well that they can expand into a bigger space. I guess we can thank the economy for that. With things the way they are, the second-hand stores are doing better than usual. Not many people want to pay full price when they can get items that are next to new for a fraction of the price. That's fodder for another entry.....
In the line of expansion, the Walgreens near my dr's office is getting close to opening up. Kaiser (my dr's office) has built a new building and will be moving into it this weekend. I'll be going there next week for my shot. Just down the road from us is a store that's been empty for a while. The signs say an Aldi's is moving in. I'm looking forward to checking it out. One of these days I really should see if it's within walking distance. It'd beat crossing that busy street (4 lanes) to the new WalMart that's being built in the mall (I'm guessing it's about the same distance of a walk, too). 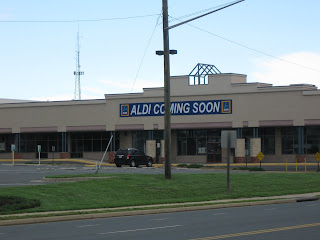 Some businesses are doing so well that they feel the need to build two of their company side by side, like the &-Elevens below. The only major difference between the two is that one has a gas station attached to it and the other does not. Gotta love redundancies. 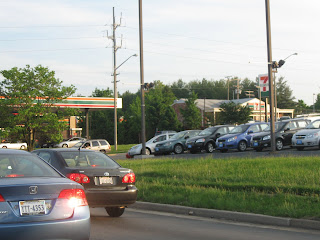 Well, we've covered the neglect, expansion and the redundancy. You'll notice there isn't another picture, yet I do have one more word in that title. Jeannie, the good news I hinted to in my email (ya know, the "I know something you don't know" email)?
*points to the Weight Watch ticker above*
Yep. Thursday was a trip to the dietitian. Not that I really needed it, but after the last unofficial weigh-in (256.6) I decided that it was time to get one on file. Anyhow, I needed her to see I was still doing well and that I hadn't gained any of it back. I weighed in at a 253.....45 pounds gone in 10 months. I'm 13 pounds down since my last official weigh-in in February when I had to go in for that sinus infection. The weight loss is slow going and it seems to bounce around (not a straight downward slide, but an up and down with a downward trend....did that make sense?) but it aint coming back, so long as I behave myself....which I rarely do.
posted at 6/12/2009 05:00:00 PM

You're doing great with the weight loss. They say it's easier to lose the weight when you first begin than later on, so stick with it like you've been doing and you'll reach that goal you've made for yourself. *hugs*

Good job on the weight loss! Keep it up and soon you'll reach your goal.

We have a 7-11 and an Allsups side by side on South 14th street. Allsups is also a convenience store. never have understood about why call them convenience stores..You can't find what you need and they are all way over priced !! LOL

Dunkin Doughnuts is THE thing in my town, they just built another!! That is at least 6 in my TOWN, not city, TOWN. Dang I wish I had stock in that! There is a huge shopping complex that has been empty forever and as tough as times are I am really surprised no one has snatched it up, it has prime location!!

(and I STILL know something you don't know!)

Way to go on the weight loss! That's the way to lose it... Slowly. It doesn't matter if a couple of lbs comes back now and then, as long as there's a downward trend. You should be really proud of yourself... You're doing great! :)

Awesome! You keep losing weight and someone will have to tell you to STOP!!! NO!! NO MORE!! WE DON"T WANT YOU TO DISAPPEAR!!! :)

Things are changing in the suburbs.. not neccessarily for the best - but fighting change is a loosing game. We have way too many drugstores here - I think there are about 30 within 5 miles of my office. There are two CVS right next to each other - on was another chain CVS bought out - but they keep both stores. Crazy.

Aint that the truth Alice. It was so much easier the last time I did it but then again I was practically starving myself and exercising much more than I am now.

Thanks Yaya! 103 more to go. I'm gonna do something nice for myself when I hit the 75 pound mark and keep it off.

Yep, Karla. I figure another year and I'll be down to my goal weight. Hard part after that is keeping it off.

Mmmmmmmmm Dunkin Donuts! The BEST place for donuts. Well that's according to me. Hubby grew up in the south and their thing is the Krispy Kremes. Ew. The thought of ordering a chocolate donut and getting that piece of garbage they gave me instead. *sigh*

Thanks Jeannie! Yep, I'm sure you do....alotta somethings. Yeah, I know, I really suck the fun outta that game! But as some of my nearest and dearest here can tell you, it's highly likely I found out anyhow unless it's something you yourself is doing.

Yep yep Tori. That's why it all came back in the first place. That and the fact I LOVE my food.

Not likely, iggy, I love to eat and really much more than I should.I would never allow myself to get that thin again. At 129 (5 pounds heavier than the low end of the dr's charts), I'm no more than skin and bones and not very healthy looking at all. The diet before that, one a dr put me on, had me losing weight so fast a pharmacist (a family friend) was afraid of me becoming anorexic. Notta chance. Dr took me off the diet for 1 week because my blood sugar had crashed and I passed out in school and what happened? I gained 10 pounds. *sigh*

That's awesome! Congratulations on your weight loss so far. I know you can keep it up and lose more. As long as the trend is downward, you don't need to worry about those little upward spikes.