from the passenger seat

Several months ago, we'd paid for a Pampered Pet Package at the vet's for KatyLou. The package had 14 days boarding, 5 vet appointments and 7 groomings all bundled for one price. Awesome. So this last Friday we carted her off to the "spa" and ran some errands.

I'm not sure when it finally happened but that Walgreens that they were building across the street from the strip mall the Shopper's grocery store is in is finally open. It's really good to see some new businesses come into the area as it shows some growth. It would have been nicer to see some really new businesses come into the area, ya know a store that didn't already exist around here. It could have been worse, though, it might have been another WalMart or 7-Eleven. 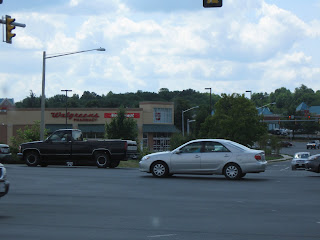 Is it just me or does anyone else find this picture slightly amusing? One side of the building contains a medical center, while the other houses not only a bank, but a Dunkin Donuts and a Baskin Robbins. At least when someone has a heart attack from all the fats in those sweets, they won't have too far to go to get to a doctor. 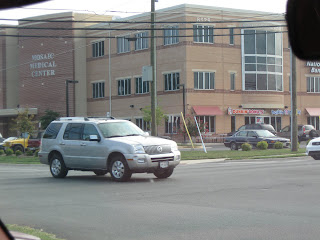 While we were on our way to drop off and later pick up the dog, I noticed that the new apartments are almost completed. These are the same ones that were just breaking ground when we were living in the corporate housing. There will be lofts on the top 2 floors while stores make up the ground level. I half expect that we'll see curtains in some of those windows by next year. By then, we'll be having road construction out there because I certainly don't see that the present roads will be able to accomodate the traffic that I'm sure will start showing up in the area. 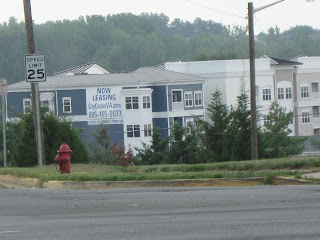 Here is KatyLou, fresh from the dryer. She was one happy, clean poochie. 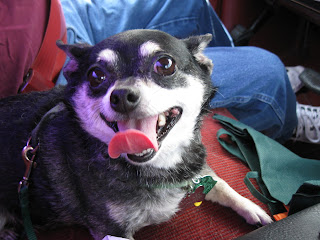 Katylou is posing! Precious.
That picture of the donut/medical building is ironic. Your area seems to be growing rather quickly. I wouldn't be surprised to see new businesses follow the increased housing.

The endless waves of grain are rapidly being replaced with the endless chains of CVS, Dunkins, Starbucks and Walmarts.

The same old stores with the same old stuff...every half mile or so. And here, what used to be Commerce Bank and now TD Bank, seems to have a branch every 100 yards.

Sounds like you got an excellent deal on pampered KatyLou care!

p.s., I'm still trying to figure out how ALL that tongue fits in that little head. :)

She really does look happy!

It's nice to see some construction being finished. I have seen too many abandoned projects over the last few years.

Yeah, I found that picture to be a bit odd. Looks like the medical center was looking for new patients from Dunkin Donuts and Baskin Robbins. It's a gimick, ya know.

Awwww, just look at adorable Katylou! So precious! Hope you have a great weekend and thanks for being understanding about my current blogging situation. Have a great weekend - oh and don't forget to stop by my weekend blog party :-)

How sweet to give your dog a spa day!

KatyLou sure does look happy! Was it really because she's clean? Or was it because she's back in the truck with mommy and daddy? LOL

Don't you just love the smell of a clean dog?

Such a cute pup!!