You know what's wonderful about birthdays these days? It's all the coupons for freebees and reduced priced items you can get if you just know where to register with. I'm one that doesn't like when the restaurants make a big deal over you at table-side, but I'm not above using the coupons for the free meals or desserts or whatever they're giving away.

This Thursday, we went to Logan's because I was so in the mood for one of those little desserts in a bucket that they sell. The fact I had a coupon so it didn't cost me that extra was a plus too. We won't go into the fact I ended up ditching hubby at the table because I thought the waiter was going to come back with the whole staff to sing to me once he saw the coupon we gave him. Nope, I so would NEVER do that. We also won't go into the fact that he was laughing at me when he exited the restaurant because I'd bolted for what amounted to as no reason at all.

On Friday, we decided to lunch at Red Robin. We don't normally go because they're kinda pricey for a burger and fries, and they're a ways out from the town house. However, when you have a coupon...you make the trip! Well that and the fact that I just LOVE their sauteed mushroom burgers and freckled lemonade. On the way to the restaurant, I was snapping away and then I see something unusual up in the sky. All I did to the picture below was use the auto correct option in the photo editing program. Even without it darkened, you could see the colors in the middle of the shot. You can see pink and yellow in the picture, but green was also visible to the naked eye. It was like a very faded rainbow. We'd had a smattering of rain very early in the morning but it was pretty dry out when we were out and about, and we weren't due for anymore rain until much later in the evening. 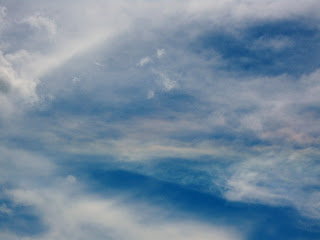 I simply adored the landscaping when we pulled into the shopping plaza's parking lot. Different flowers for a change, YAY! I told hubby that once we were done eating I wanted to go across the parking area and get some shots of the "gardens" outside the store fronts. The red of the blooms just has been popping the last couple weeks. So very vibrant. 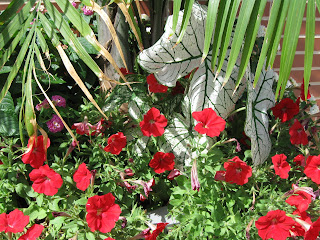 On our way home, we got caught waiting at a train crossing. The husband became like a child and practically bounced in his seat... all excited that we'd be seeing a train. *sigh*

Ok, I can understand the idiotboy's infatuation because his father used to work for the railroad and they lived really close to some tracks. As a boy, he'd spend alot of time watching the trains go by. So I got it with him....I truly understood why.

However, with this husband, I just don't get it. He was never really exposed to them that I could tell, if anything he was around trucks for the most part. So I asked him...

"What the hell is it about trains that guys like so damned much? I mean I get the cars, boats, planes and even to a lesser extent motorcycles. But trains???" 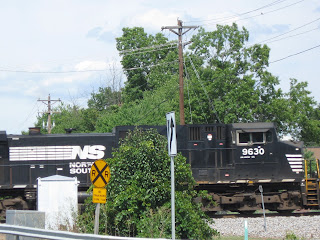 Plain and simple, they like the power. He also said it's possible that there's that wild west connection that the old steam engines have. Now that I think of it, anytime I've noticed a guy going nuts over some ol rusty train, it's always been the freight trains or the very old steam engines and never one of those slick, speedy passanger ones.

I promised myself that when I got home, I was not going to take yet ANOTHER picture of the roses out front. I even took and had turned off the camera and placed it in my purse so there'd be absolutely NO temptation to click them again.

And then I heard it.
Very distinctly a bug in the area of said roses.
Then I saw it, saw what it was doing and decided to chance taking a macro of the event in progress.... 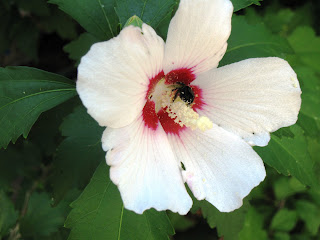 The only thing I've done to the photo is use the auto correct option in the editor to lighten it up so you could see what was going on better.

We have a heat advisory for tomorrow. *ugh* High temps are supposed to be around 95 degrees PLUS the heat index. Not that I really mind it that hot, but knowing the weather here we'll end up with the humidity on top of it all. Man, I wish we lived someplace drier... like Texas! I guess it means I won't be taking a walk anywhere for my "Unplugged" day this week. pooh! Looks like a great day for painting stuff though. Got the next set of figurines on the table, all I gotta do is get them primered and ready for color tomorrow.

I think I'll let this do for now. I have at least 2 more entries all scheduled for this week (Wednesday and Thursday). There might actually be one more added (possible Friday)...haven't decided yet. Then there'll be the usual Saturday one as well. I hope everyone has a wonderful week!
posted at 8/09/2009 05:18:00 PM

Cool pic of the almost rainbow. I've taken one or two pics like that before, too, and it's awesome to see.

Cool pic of the flower and the bee...doing his bee business.

Gonna be hot and humid here tomorrow, too....just not as hot as you.

Great shots! I think it's so funny that you ditched hubby in the restaurant. I hate that whole birthday thing in the restaurants but I love to subject other people to it. I even request it if I'm not sure if they'll do it, LOL!

I won't be around much during the week - I have those ten hour days again this week. Have a great week and I'll catch up on the weekend :-)

I think the real answer is 'men never grow up'.

I love how you are still celebrating your birthday. ;)

I do see those rainbow colors in the clouds. That's really cool. You always notice what so many people would overlook. Good thing you carry your camera around.

You have been whoopin' it up this week for your birthday, for sure. All the attention, all the eating out, the shopping, the pretty nail painting...you deserve it!

I love the train!

And I had not thought about registering for coupons... duh on me!

NICE shot of the bee in the flower!! And I LOVE Logan's! But they don't have them in CT or anywhere near, so I only get to go once or twice a year when we are in Florida!Sad!

You've been a busy lil bee!! Love the pictures, especially the sky one - so cool!

Yummo on the Red Robin and freckled lemonade!!!! Haven't had one yet but have HEARD all about them, lol!

Have a great, unplugged day!

What a day! (At TexasRoadhouse they make you ride a saddle and sling a napkin around on your birthday LOL) Beautiful pics!!!
and how time does fly! Has it been 3 years already??????

Love these Superior Snaps. So I guess double-congratulations are in order? I'm guessing that coupon you used was a b-day coupon, and I saw your mention about your 3rd anniversary. Congrats!

I always enjoy a train - I guess I'm just a little boy like Yaya says.

15 days - 8 hours - 16 minutes until your 3d year wedding anniversary. Hmmm, should we KEEP on partying or should we rest up for the next one?! Hmmm... someone else will have to decide...

What's wrong with liking trains? Trains are cool! And it's not only boys who like trains you know... I always love trains. I even have a little wooden train set.

WWe're close enough tto hear them on the odd occasion they pass through our town, and when I tthink I hear one I tell people to "shush" so I can hear them better. Once I can do the walk in to town I can easily get to the tracks, so I'm going to figure out the time table of the trains, then I can go get photos. :)


You can't do that here... Get coupons just because it's your birthday. The most you get here - unless you know someone from the resteraunt and they decide to give you something "on the house" - is your waiter saying a brief "many happy returns" or "happy birthday" when he/she is taking your order and you mention it's your birthday. I don't mind really though... It means you avoid the fuss you were saying about. I'd rather have to pay full price for my meal than have a waiter come and sing to me, or whatever it is they do.

Sorry about typos. Trying to play with Kero while replying to blog posts.

My husband gets all excited when he sees a train too...silly boys!

You don't see old fashioned trains much these days (At least round here!) I luv em!