Heh. Now that I have your attention *gigglez*.

I so meant to have this and the next couple entries written on Sunday and scheduled like I'd done the week before. For the life of me I can't remember what side tracked me so badly. Maybe I need to bump the "sorta unplugged" day to Sunday and leave it as the day of rest that it's meant to be. I do know that the Comcast outage on Tuesday (nearly all. damned. day) didn't help matters in getting my blogging done.... nope not at all. Well that and last Friday's side trip which triggered a minor case of depression (where the HELL did all that time go??)....that didn't help matters either.

Monday was my day to purposefully and willfully ignore all things 'net for several hours. It's unbelieveable how long the day seems when one unplugs somewhat and just goes to find other things to do for the day. Below you'll see a pic of some of the pieces I've been working on. I know Jeannie was wanting to see them in their "rough", half-way done state. I took this picture sometime last week. I've since finished these pieces and started a new project. No, I won't be posting a picture of it in any stage until it's finished, shipped and maybe sometime after it's been received. As you can see, they don't exactly look anything like what the finished product will be like. I gotta touch up a couple of the pieces because something got on them when they were outside drying (I spray them with a matte finishing spray when I'm done. It's not enough to protect from the elements if the piece is outside, but it's enough to give the piece that "done" look ). 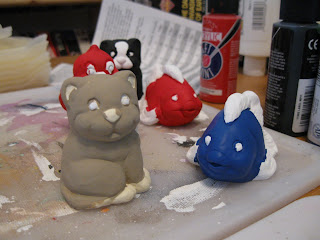 While we were out at WalMart this last week, I got another nail polish. I haven't decided if I like the color on me yet, but I do LOVE the name of it! Drama Queen, how very appropriate! I'll try it again in a week or so and if I'm still not sure, I can send it to my GaSis. She's living with her sister and mom and the sister LOVES pink. This week's shade that got picked up is Crimson Pearl by CQ. I definitely like it better than the pink. If I think of it, I'll post a picture of the color gracing my nails. It's much nicer than the block of color they have on their site. 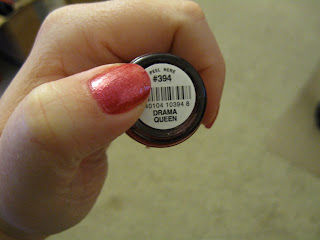 While we were out on Saturday, we stopped in the local pawn shop and I saw this beautiful ring. I won't be able to wear it that often because it's not pure gold, but with a little coating of clear nail polish I should be able to get some decent wear out of it. It was sitting in the case with a $49.95 tag on it and I only had $20 with me so I was all set to put it back because I wasn't carrying my bank card that day. When my hubby says that if I want it, I can have it (waits as several of my readers say that I'm extremely spoiled) and he whips out his wallet (yes, I am, but I don't ask for jewelry that often so when I ask, I generally get what I want). So the clerk rings it up and the total with tax comes up as LESS than the display price. Seems that to make the sale, he knocked almost $10 off the price. WHOOT! 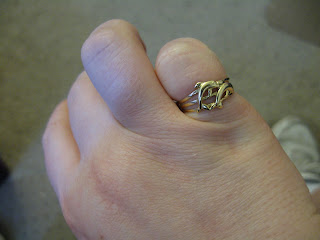 Oh! And I think it was Saturday that I got a couple pieces of "good mail". First was a package from Dorkys from over at Dry As Toast. YAY!! It was my goodies from that Pay it Forward type giveaway that she did awhile back (ya know, the same thingy that failed miserably over here with only 2 of my friends participating even though it's a really EASY contest to do...*sighs*). She sent me a hand painted postcard with a lovely note on the back, 3 handmade cards with blank interiors and envelopes to go with them as well as a nice book that I'd won from another give away she'd done. As suggested on her note, I handed the book to hubby and told him it was all for him. *giggles* Now I KNOW that the blank cards are meant to be used, however I think I have something else in mind for them. 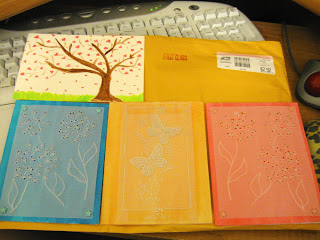 The very same day, I had a small envelope show up from Jeannie. *gigglin* Sorry, I just thought of my poor hubby who gives a very valiant attempt at pronouncing her last name. He botches it everytime. Anyhow, the envelope had a lovely, handmade anniversary card in it. Thank you so very much. I do believe I have at least 3 Jeannie originals in my possession now.... no wait, I think there's 4 of them. Yeah, I'm spoiled. Go ahead and say it sweetheart. You know you wanna. 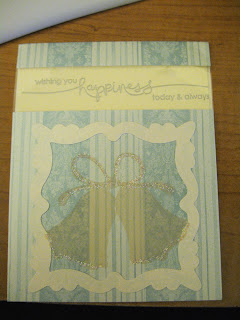 What? There's other stuff to do besides being on the computer??

I LOVE the ring, I am infatuated with dolphins in case you don't know that about me. Seriously when I have been to Sea World, I can skip all the shows if I can have a front spot at Dolphin Cove!! Feeling them and feeding them (I touch dead fish for them!) is so amazing!!

The new polish is pretty, but not me for sure, I need crazier, brighter, weirder stuff. LOL!

I love the ring too (i think you know i love anything dolphin). I have both gold and silver dolphin earrings I wear from time to time.

While I was going thru old photos the other night, I came across a picture of Terri while we were at Sea World Cleveland in 1999. Odd coincidence, Wendyburd1...he was sitting next to the Dolphin Cove sign. In fact, it's one of the double prints I pulled out of the pile to scan sometime. That and the statue of a cow standing on skiis and wearing sunglasses. :)

Have a good weekend, Styxie.

I like the nail polish and your new ring. Sounds like your hubby treats you good! Your pay it forward gift is really pretty...Dry as Toast has a real talent. I also particiapted in another pay it forward give away and I only had two people sign up..oh well, such is life.

There's nothing wrong with being spoiled. I'm spoiled myself... It comes in handy sometimes when you really want something and don't quite have the money yourself. ;)

Like I said, I'd have liked to join in with that giveaway thing, but I wouldn't be able to start the items until after Christmas. Now, if that's OK then I'd be happy to sign up to it with both you and Iggy. It would be nice to make some things for any friends who were interested. And it's always nice getting hand made items.

Oooooh! Look at the hand-painted fishes...

Hope your feel much better this Friday than you did last Friday despite getting an allergy shot.

And I'm glad you liked the cards I sent over. I'm definitely no Jeannie, but I tried!

P.S. Woman there is an "s" at the end of my name!! You and Iggy keep writing "Dorky's" in the possessive form. My name is wack enough as it is, lol!

I need to step away from the computer some more, too. But I've been "On the Road" for almost 2 weeks, and really feel like I need to do some catching up!

perty ring! I don't do rings much but I really think that one's perty!

I'm always on the lookout for rings that aren't too gaudy, but I have such a hard time finding one's that fit. So I rarely wear them.

Im on day 5 of STOP BITING ME NAILS after more then 45 years as a biter, I have never had a nail past the end of me fingers LOL....so have never bought nail varnish, always had bitten down to the quick studdy nails.. and as daft as this seems, seeing as Im in the middle of turmoil and problems all round, I thought I would challenge myself to stop, thus making me believe I can get through anything again....

The ring is pretty...

What a streak of good stuff you have going on!!

I love the polish name, but not sure about the color. It looks a bit orange in the pics and that doesn't seem like you.

So glad you liked my card! I know it was way early but I didn't want to forget!

You are spoiled, but I already told you that!! Hugs!!