thinkin of a friend, buckle up, shoppin, and somethin else

I'm trying to get myself back into the habit of writing every day or at least every other day. I'm gonna tell you, it's rough when you're not used to bloggin quite so often. However, I find that I'm finding enough mish mosh with the pictures I click from week. If that doesn't work, I'm sure there's plenty in all the different files to come up with ~something~ to post more than once a week. 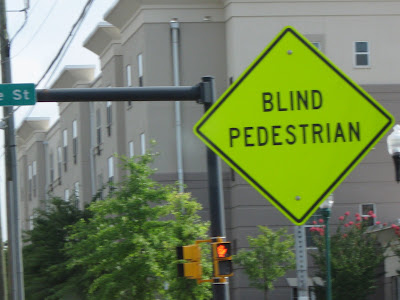 This last week we were out to the allergist's office. According to any online directions sites (Mapquest, Google Maps, etc), it's supposed to be a 35 minute drive at best but we've found it usually takes 45-50 minutes due to the flippin traffic. We always arrive early though because hubby insists on leaving 2 hours early...just to be sure. Anyhow, while we were on our way to the allergist's, I saw the above sign and immediately thought of our dear friend Tori. Now if they could just create ones that say "Idiots Crossing" or "Idiots at Play", then I'd be all set. The only problem is that I suspect that such sign will need to be posted on every damn corner around here considering some of these neighbors. 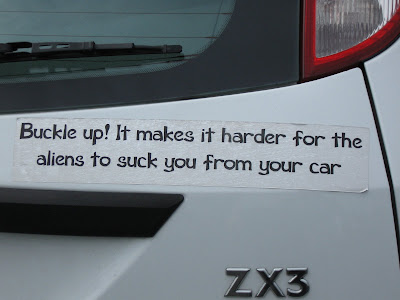 When we pulled into the parking lot and headed inside the building, we came across the above bumper sticker. It was the funniest one of the 7-10 stickers on the car. Considering the number of OCHA and OSBAs around here, I think this is a very good warning to have! There's some really great alien type stickers on Zazzle's website. Several versions of the above sticker and many many others like this one (nf/d warning). Oh look, it says you can create your own. Anyone willing to bet that iggy will be on that site to make a professional version of this sticker? Maybe I better see if I still have a copy of that one and redo it for the next election. Whatcha think?

On our way home Friday, the truck decided to overheat. When hubby popped the hood, even this vehicularly stupid gal could see that there was plenty of fluid in the thingy where the coolant is supposed to go. *UGH* it means the thermometer ~finally~ gave out on us. So we let the truck cool as we were off shopping and then drove straight home. Mind you, it's less than 2 miles where we were to home. In that short time, the truck overheated again. *shakes head* Hubby decided to let it cool overnight and then bring it in to the repair shop. I don't wanna hear it, really. I DID tell him to take it right in and that way it could cool overnight and they'd be able to get to it right away. Did we do that? NO. *sigh* He woke up about 7am and took it in as soon as he knew they were open. Thankfully they are just around the corner so the truck didn't have time to even get luke-warm.

While hubby was headed to check on the truck, I decided to pop into the Payless next door to see if there were any specials. My sneakers are looking rather beat and since I have to wear them every day to ride my bike, they don't exactly have a decent amount of time to air out. I was hoping for a nice cheap pair to wear on the alternate days. I ended up spending a bit over $20 for a nice comfy pair. They were originally $24.99 and they were on sale for $19.99 which is a decent deal. Seems the feet shrank by about half a size. The last pair I bought I needed a size 9 to get a pair that was wide enough for my feet. This pair is only an 8.5. I really hate my wide feet. Mom always called them Fred Flintstone feet because they were short, wide but they got me to where I needed to be. The suckers are only a 7.5 when you measure toe to heel, but wide enough to need the next full size up in a wide to get the width where it needs to be for comfort. 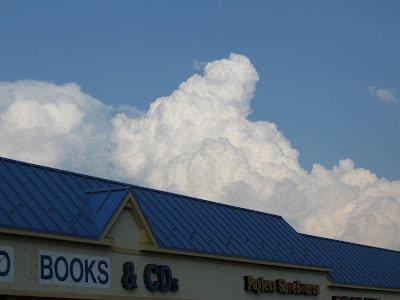 Well the truck wasn't done yet, unfortunately they had alot of appointments that afternoon and of course those take priority. *grumbles* Hubby and I met up in McKays and went home shortly after.

When 2-3pm showed up, with no call, hubby got antsy and went over to see if they were done. Why he didn't call, I don't know. Near's I can figure he just needed to get out of the house. Not that I blame him any. He called me before leaving to come home, it wasn't done yet but they were just bringing it in to have a look see. Oh dear. I saw it coming. He was told that they'd call before quittin time (5pm) to let him know if they had it done or not. By 430pm, hubby needed to get out again and decided that we'll both walk over and check. Anyone who's thinking that it wasn't done give yaselves a nice gold star. Now before anyone spouts off on the hubby (which it would be deserved for delaying) OR on the mechanics, you need to know that the truck is an '88. It's old and has served us very well. Plus the part needing repair is an ORIGINAL part. That said... it wasn't finished because a bolt was giving them a hassle. It's one of those things you need to take it easy removing because too much pressure will break the bolt and THEN you're really screwed (literally and KY aint provided). So they were gonna need to soak it down with something and let it set for a few hours to see if it can be removed easier. Yeah. Quitting time on a SATURDAY and the truck's not done. They're not open on Sundays and hubby needs to get to be able to get to work on Sunday. *sigh* Ya know what though. The head mechanic really surprised us. He handed over the keys to the company vehicle and is allowing us to use it until the truck gets fixed. With any luck it'll be done Monday afternoon or evening sometime because I really hate riding in a rolling billboard.

Below is a shot of the 2 new colors. I did, indeed, buy an Adam Lambert blue...which is the next color I plan on wearing. I really love the shade I have on right now though! 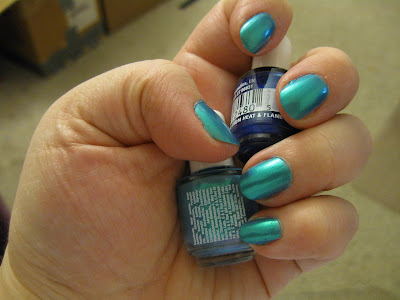 there will be a second post much later tonight....sometime between 11pm and midnight.

Happy Birthday, Styxie. :) I hope you have a good day.

The bumper sticker was pretty cute. Who wants to be sucked out of a car by an alien anyway?

The cloud pic was awesome. I took a few the past month or so but never got them posted...along with a few other hundred pics.

Sorry to hear about the truck, but that was nice of the guy to loan Ranger the company vehicle. Don't see that happening very often.

My car has major troubles...another thing I haven't posted about but will eventually. (yeah, one of those things I was pissed at yesterday)

The nail polish looks pretty. I don't wear nail polish and can only remember having some on my nails a few times when I was a kid.

Time for me to get ready for work. Hope your day is a special one. Happy Birthday! *hugs*

Love the nail polish - looks like the sea on your nails!!

I hope the truck gets fixed soon and isn't a fortune!

The nail polish color is gorgeous. I would absolutely wear that!

If there's anything more aggravating than dealing with car repairs, I don't know what it is.

Didn't even know those signs existed.

Sorry to hear about the truck. Hope they get it fixed soon. That was good of them to lend you a car while it gets fixed.

I have that same problem with shoes.

After Iggy's post I couldn't figure out how come I didn't have you on my important dates page. Turns out that - though I didn't have the actual day - I did sort of have you uthere... Under August though, which was why I hadn't seen your name when checking the July list. LOL!

You need my mechanic.I think they have anything and everything all the way back to the 60's!! but yeah making an appt is faster and easier! :-)

That shade would never look good on me...but it looks nice on you.

Hope you're having a good birthday hon..would sing for you but I'd hurt your ears! LOL

Even though you have truck problems, it sounds like you had a relatively good day - right?

I'm not going to lie... I don't like the dark blue and black nail polishes. But then I'm not the one wearing it, now am I. I'm glad you found the ones you like. I'm pretty sure it is a generation thing because my girls and DIL all have those colors on at some point or another.

I'll check back later tonight or tomorrow for your next post. Glad to see you posting regular again. Yea!

Wow, that was impressive that the mechanic gave you guys a company vehicle to use! Don't find many that will do things like that these days! Love the new nail polish. I wear colors like that too :-)

Love the manicure! And one day I'm going to compile a book of cute bumper stickers. Unless someone has already done that...

I love some of those crazy signs lol

I would love to wear nail varnish but alas I have always bitten my nails and have never ever had proper nails LOL.....

I will grow then if ever someone wanted to marry me, just so I could have pretty nail varnish on one special day LOL see how much money I'll save on nail varnish :) cos Im unmarryable lmfao (is that a word?) lol

Please tell me you took advantage of my tax dollars and bought a new truck while Cash for Clunkers was still going on???? LOL