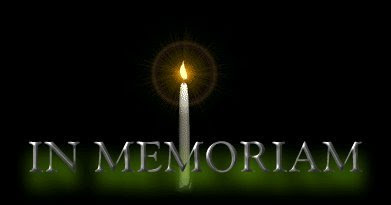 What a sad day I had yesterday. The first shock happened either late morning or early afternoon. I was in my MySpace checking messages and such. Something I do on a normal day. In my inbox on that site was a message from someone I dont really know. I mean I know OF her and Im pretty well know who she is but she's not someone I'd talk to. In fact, it's the same girl that gave me grief a few months back when someone dropped some nasty words on my Yahoo page. Why were the words there? Because someone else had said something nasty on my page about one of the people on my friends list and I'd called them out in my blog by name (this is the one reason I dont normally use names in my blog...ever). Well after I'd called this person out next thing I knew I had two others leaving threats on my page directed at me and these werent even people I talk to! The girl that left me an email via MySpace yesterday was one of those girls. Needless to say I tossed around whether or not I wanted to open it or not. She hadnt given me any grief in months and once that other situation was dropped she'd left me alone so I had no real reason NOT to open this communication. What a sad surprise greeted me in this message that was sent. I was informed that a friend of mine (not a great friend but one I did enjoy talking to now and then) had passed on a few days prior. Now the woman wasnt exactly the picture of perfect health and I knew she'd been ill off and on. I also know that she'd been having trouble with certain people (the girl who wrote this happened to be one of them) and had been moving alot. I also know from pictures that I saw of her that she was quite heavy (Im guessing from the pictures she was heavier than me and Im nearly 300lbs....). Anyhow the letter informed me my friend died on the 18th of this month and the only reason why I was being written is because the girl knew I had been one of the lady's friends. I made sure to pass the info along to everyone I had an email address to. After I did this I wrote the girl back thanking for the information and asked how my friend had passed. She said she wasnt sure as they (Im guessing the drs?) had said it was her heart at first, which makes alot of sense, but then later they'd said her heart was fine. Basically right now I dont know how my friend passed. The girl said she was going to be calling the woman's husband and when she found out she'd let me know.
Rest in Peace Linda aka LBR. You will be missed.
The second one that was a shock and a half I found out about around supper time. I was finishing geting dinner ready and hubby asked me did you know about this one? I asked what....and he told me that on the news they'd just said Heath Ledger passed away. Damn. I dont normally watch the news during the course of the day and news like this really feels like a kick in the gut. I almost dropped the plates I was carrying. Rumors were that this young man had really blossomed during the shooting of the new Batman movie and that he'd done well during the shooting of one other movie that's to be released soon...and now he's dead. He was found with sleeping pills all around him yet the autopsy was inconclusive. Heath had battled addictions in the past but was rumored to be clean for the last year. A real shame that a star just really coming into their own would be extinguished so soon.
Rest in Peace Heath Ledger.
posted at 1/23/2008 12:54:00 PM

I knew LBR too, not terribly well, but I saw her to chat to every so often starting way back...when. I think its been around 10 years now. It was a surprise to me when I saw the news.

Fame doesn't mean success and so many of the rich and famous are real failures in life (we need not mention any names) and for some, life must seem too much - and money truly doesn't buy them happiness.

I still miss John Belushi. His antics brought much glee to my life, but he too, had trouble dealing with fame and success.

*nods* @ the Fame doesnt mean success comment...how true and yes there are MANY (several whom we see in the news nearly daily) that cant seem to handle it well.

I was at work yesterday early afternoon when a co-worker mentioned that Heath had died. A couple girls in the office were in shock, had seen much of his work, and I believe the other had met him at a party once.

I've never seen Brokeback Mountain, and have no desire to, but I did see A Knight's Tale, and he was a very nice looking young man. Such a sad end to a very promising career.

I love A Knights Tale but I am also fond of that teen flick 10 Things I Hate About You which was a reworking of The Taming of the Shrew. The Patriot was actually quite good too. A surprise as that genre of movie generally isnt one I'll watch. There are a few others Im wanting to see but Brokeback is not one of them.