Saturday we got up like we had this entire trip and went to breakfast with the folks. Thankfully dad has mellowed out some and doesnt insist on going at 7am and we'd been allowed to sleep until about 9am. In fact, now I think of it, they didnt even call us to make sure we were up. they simply waited on us and we called when we were ready. Gotta love that. After breakfast we boogied on out to run some errands. Our first stop was to the nursing home to visit a neighbor and cousin. The neighbor used to live at the base of the hill my hubby's family's house sits on and this woman pretty much watched him grow up. As she puts it "he was the first baby on the hill". So everytime we go in we pretty much make sure to go visit her. She's got alzheimer's really bad now and each time we see her she seems to have slipped more and more. This trip was different as she didnt recognize him at all. That was a hard visit for sure. We found out later from her granddaughter that the woman is good either first thing in the morning or 1-2pm after she's had her nerve pills because all the going ons at the home really annoy her and drives her into a confusion. After visiting with her we popped over into the next room over where we'd been told that one of hubby's cousins was staying. This lady I dont ever remember meeting although she acted although we'd been good friends. More than likely she thinks she knows me because hubby's momma fills everyone (and I mean EVERYONE) in on us...and I mean everyone. Im not going to fuss about this. You must expect that when you marry someone from a small town.... very small town. On our way out we got into the elevator as usual...the doors closed and thunk. Damn thing got stuck. Doors wouldnt open, the elevator wouldnt move and it wouldnt respond to any of the buttons we pushed. We wont even go into their sorry excuse for a call button that just blinked and made a horrid noise. The guy in the elevator with us told us that this particular elevator broke down on a very frequent basis...very.frequent.basis. It was 10 minutes before anyone realized we were in there..another 5 before the bugger would move the whole 1 floor down (stairs are problematic for me with these bad knees of mine) and then a good 15 minutes before they could get the door open. They're damn lucky that it wasnt a patient caught in there as Im sure they would have been facing a lawsuit if the elevator breaks down as often as we were told. The workers in the home had a nice chuckle out of it, even being cheeky enough to ask us while we were trapped what we wanted for supper...they'd have it processed into a soup and fed to us thru the crack in the door with a straw. They learned real fast that some of us dont appreciate jokes like that when we were released and the nearest person got a withering stare from me. 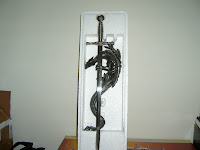 The next stop on Saturday was to the flea market. They're open Saturdays and Sundays. We wandered around there for about an hour. My goal was to see if I could find another of those large, seashell hanging pieces (one would call it a windchime but it doesnt chime in the wind so Im not sure WHAT to call it) as I'd had to pitc

h the one I bought 4 years ago out (the handles broke and I couldnt see how to fix it, nor was I inclined to pack it due to size). Unfortunately, they didnt have one this year. We did find some really nice knife pieces that hubby liked so we bought one for him and one for his good buddy in Ak. We also found a special something for the good buddy's wife (she loves frogs). 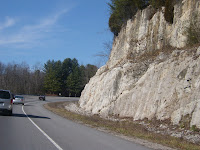 Afterwards, we went to the mall over in Middlesboro. It's such a beautiful drive out that way. There is this one rock formation that is absolutely gorgeous but I forgot it was just before the tunnel and shut my camera off before I could get a good picture of it. By the time I could get the camera turned back on (it's a pokey machine), we were not in the best position for a shot. I'll have to remember to get one the nexttime we're out that way. I had wanted to take a trip to the mall specifically to get some more shower gel and buy another horse statue. Well the store with the shower gel (Bed Bath and Beyond) didnt have the one I wanted so I got some exfoliating scrub instead in the fragarance I wanted (Moonlight Path) and will be seeing if I like it as well as the other. The store that had the horse statues last times no longer carried them so I ended up going elsewhere and getting a beautiful black panther statue instead. It was originally $35 but marked down to $12.99...gotta love that.Before our last errand we decided to stop off at Shoney's for a late lunch. The last errand we ran was another trip to gramma's house. Gramma's quite frail and so hubby likes to spend 2-3 days visiting her when we're in town...even if we're only in for 2-3 days. I dont much mind gramma, it's her son that lives with her I cant stand. Every family has a black sheep in the family (and some have 2-3) and this uncle is just that. I usually have no clue what he's talking about but hubby does and manages to keep up a polite conversation with him. Me, well I sit there and fight to stay awake. I dont know what it was, either the nice lunch or the warm room or both but this trip I was unsuccessful, from what hubby said, and managed to catch a 30-45 minute nap on the sofa while they conversed. Maybe I should have brought my needlework in to keep me occupied !

We spent the rest of the evening at his folks' house. His sister and her significant other came 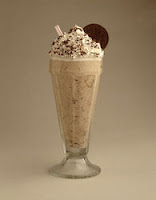 over for a bit. They stepped out for a few minutes a bit later and brought tacos back for all of us for supper. Neither hubby or I were overly hungry as we were still full from the late lunch but grabbed a taco or two each anyhow. We spent a few hours together and then left to go back to the motel room. As we were leaving I got this craving for a milkshake so we swung by Hardees first. They have the best milkshakes there. They do "hand-dipped" ones, which means they use the hard scoop icecream and not the softserve like McDonalds, Burger King and others use. Their chocolate shakes are made with chocolate icecream and NOT vanilla icecream blended with chocolate syrup. The special this month is an Oreo shake topped with whipped cream. It's pictured in vanilla but I had them make it with chocolate icecream for that extra chocolate kick..and the whipped cream? Well it aint Reddi-Whip! Yummmmy. I brought the shake back to the motel with us and we relaxed for a couple hours before bed. Dharma was out and about this evening. It was so good to see her relaxed, I almost hated to have to stick her back in her carrier the next day. 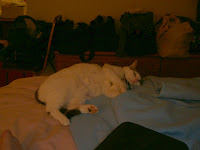 It's called my fingers dont wanna work correctly today and I hit enter right after I put the title up....hence the blank entry when you came in. Am still writing it ;) come back a bit later.

OMG, I can just imagine the look you gave when you got out of that elevator. I bet you were NOT happy to be stuck there, and the jokes didn't help. Sorry, but I was laughing my ass off.

I know how it is with alzheimers. My uncle has it, and the last time I was there to visit, I don't think he really knew who I was. He's normally very quiet, but with the alzheimers, he's even more quiet, I think he said maybe 2 words in 4 days.

That's a good idea to bring your needlework with you next time. That way you can have something to keep you occupied, and still half listen to conversations so they don't think you're completely bored.

I would have freaked being stuck in the elevator....seriously. :\

Yeah, that's the price you pay for living in a small town or a village, everyone knows you, and when you marry someone from a small town or village... Well, you might as well have grown up there, 'cause people will soon know everything about you (especially the things you don't want them knowing). Take it from someone who was born and raised in a small village.

I'd have been more bothered about the lame jokes than the fact I was stuck in an elevator.

Hmmm..iggy never came back to this entry...LOL. Must be because I decided to split the two days up...

Chicago: :P~ *hands you ya ass back* My gramma in Co has alzheimers and we have taken to sending pictures with our names on the back so she knows who she's looking at. She hasnt seen me in years though and I doubt she'd know me if I showed up. The needlework helped some. The piece Im working on isnt like the picture one I was working on before that took alot of concentration...this one has alot of borders so I can be more sociable as I'm working on it.
Dharma is pretty much taking the bed in the apartment over too. No surprise though.

Alice: Yeah. I kinda figured. Worse yet I believe the gentleman in with us was claustrophobic as the minute we realized the doors werent opening up, his jacket came off and his shirt started to unbutton. Wouldnt have been bad if he'd been cute...

Tori: Being highstrung I was bothered by both. When it was obvious we werent getting anywhere fast I sat on the floor in the corner.