If you go back to the Cliff Notes version you'll notice I've been noting what day the actual blog was written on. You'll also notice I had gotten ahead of myself in a couple cases and as such skipped those ideas when I typed this entry because a couple things planned actually happened a bit differently.

Tuesday the loaders were scheduled to arrive anytime between 8am and noon. They showed up right around 9am or so. I had kitty in her carrier before they got into our house. Boy she wasnt liking it any. Poor little baby. There were 3 that were supposed to be there but they showed up one man short. Oh yes I can see how this day was gonna go now. The way the driver figured it, they could have been in and gone before 2pm but with the no show it was 5 pm before they were done. Thankfully they worked on the bedroom first and when it had all the stuff to be shipped out, I was able to set the cat loose in the bedroom with her litter box so she wasnt cooped up all day. Around 2 or 3 pm hubby looked like he was getting antsy so I sent him off to return the modem and told him while he was out to go ahead and visit that one couple as if we waited until the truck was loaded we wouldnt have time at all to do so. I would have felt awful if he didnt get time to visit them. They have 2 kids so we wouldnt have been able to visit too much later and it looked like it would have been 7 or 8pm before we'd get there. I think this was the best thing for hubby as he was getting grouchy standing around waiting. While he was gone, a police officer showed up and talked to the driver about some code compliance issue (18 wheelers arent supposed to be on that road because it's only a 2 lane road and it'd block up the road). I heard the driver tell the cop that the stuff was "his stuff" (I guess he indicated the house) and all they were doing was loading the truck. Some jerk(s) had called in and complained that the truck was parked there. Hate to tell them, my road aint a main road and shouldnt be used as such (we wont even go into the fact they like to whip down that street). Didnt matter as the codes didnt apply to this truck because they were moving furniture and not making a delivery of any sort..oO(neener neener). Maybe they should complain about the dump trucks that whip down there on a daily basis or better yet park in my driveway and ticket the damn "boom cars" that shake the windows in all the houses on that road as they're cutting through.

Shortly after the loaders were done (so shortly after that they'd barely pulled out of my road), hubby came home. We were expecting his friend from the night before (the hubby of the couple) to come over for a bit. When he arrived we pawned off several items from the garage. I'd have loved to see the look on his wife's face when he got home as the only thing we'd discussed the night before was the wood. When he left our house his pickup bed was about half full with wood, turpentine and other carpentry items.

We went to Texas Land and Cattle for supper. It seemed rather fitting as our first date was at this very restaurant. Well actually the first first date was to a grocery store the night I arrived I went in Texas in May 2003. The first going out to supper date was to the restaurant. Im going to miss that place. Afterwards we went to one last friend's house. Neither she nor the couple could make it out to dinner the night before so we made special trips. We arrived at this friend's house around 9pm and didnt leave until 11pm. All we did was sit around and shoot the breeze, but we had a wonderful time.

It was odd coming back home and not seeing anything in the house short of the stuff we were going to take and the sofa. Hubby hooked up the portable tv, tossed some blankets on the floor for himself and allowed me the sofa for the night. We watched about 10 minutes of television and nodded off for the night. Wednesday morning we woke up around 9am (hot dayum we slept in) and he went out to get us breakfast. After we ate the rest of the morning was spent with packing last minute stuff that we'd needed the night before. While hubby was going over last minute details with the neighbor, I was inside writing down instructions for the maid service that we'd be calling in. We ran out of room in our truck for the food and chemicals so I instructed the maids to go ahead and donate to someone in their ranks that could use the stuff. Im betting we could have found the room for those 3 boxes but at that point we pretty much just wanted to get on the road.

We didnt leave until nearly 1pm... a bit later than we expected. Before leaving we did one last walk around the house..giving each other a smooch in each room. We then walked the dog around the property as we said our last goodbyes. The sucky part of this all is the fact he bought the house not only for himself but for me. The ring I wear with my wedding band isnt really my engagement ring...the house was. It's rather depressing in a way as we'd had all our hopes and dreams pretty much wrapped up in the house. We'd expected to stay there at least another 5-7 years and start a family there.... *sniffles*. Now it looks like it'll be at LEAST that long before we can get into another house because of the costs here. Our only hope is that in 2 years time (his company says he has to stay at least 2 years...only fair since they moved us) something else opens up down in North Carolina where it's not quite so expensive.

Dharma cried quite a bit the first day in the truck. You need to remember, she's never put in her carrier unless it's a trip to the vet. If I'd been thinking, I would have insisted in putting her in that thing and taking her for short drives a good 2 weeks before we left. As it was she assumed that cage, outside and truck meant V E T. How confusing for her when she'd already been to the V E T. She was pretty freaked when we never returned home and ended up somewhere really strange that first night (we stayed in Brinkley Ar for the night). The little bugger almost didnt come out of the cage. Hubby and I went to supper and when we returned played a lively game of "Find the Kitty". I want to know how the HELL you can lose a 14 pound mini panther in a barely furnished hotel room!! Yet get lost she did and no amount of calling, miauing or shaking of a treats can convinced her to come out. I learned that night that for the most part you cannot lose your cat under a hotel bed as many are blocking off the bottoms so critters dont get underneath. You also cannot lose them under end tables or sinks. You CAN, however, lose them under dressers when there is only a 4 inch amount of space between the wall and the dresser. I still dont know how she squeezed that fat ass of hers in there, but she managed it. Kitty also learned a lesson. Dont piss off mommy. She also learned what a leash was for. Again, if I'd had any indication we'd be moving this soon after adopting her I would have leash trained her from day one. She spent several hours on her leash and hiding behind her litterbox. Before going to bed, we pushed all furniture as far back against walls as possible and blocked any other holes with our travelling bags....then we let her loose for the night. 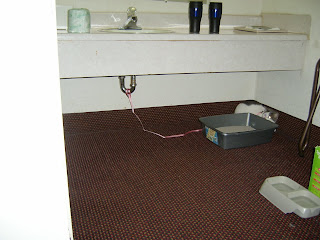 Now that is a saga. I hope you find a home that means as much to you as this one did.

Its amazing how flexible an animal can be when they want to be... or are spooked. I guess the live preservation thing just kicks in and wham! though the crack they go.

Aww...poor Dharma. I bet she was glad to see you come back from supper, tho.

Poor kitty. She was NOT happy!!! I've had experience with cats that like to play hide and seek, lol.

I know leaving that house must have been very difficult for both of you, but look at it as a fresh start, maybe the beginning of something EVEN better that before.

Poor Dharma! I bet she thought you'd taken her to a new kind of vet or something, and was glad to see you return without a vet in tow.

And, as ChicagoLady said, try to think of leaving that house as a good thing... A nice, fresh start. I'm sure you loved that place, but everything works out for the best in the end, right? So, keep your chin up, and try and think of this as something good. One day you'll have a new house where you can make new memories and start that family you want to start. :)

iggy: I sure hope so. I dont see that happening for a couple years or more though. Yeah surprising how flexible the lil buggers can be.

Alice: Not really as it was after supper she got leashed up for hiding. She was mighty happy when mommy let her off the leash though.

Chicago: No...she wasnt. Thankfully she couldnt get under the beds. That's the worst, when you have to move the mattresses to get underneath to fish a pet back out.

Tori: She may have thought that. Who knows.

Chicago & Tori: Yes, leaving was very difficult and Im having a bit of problem seeing the good in it right now. I think it's mostly because of what happened in my other marriage. Yeah, I know this is different this time because of who Im with...but still there is that little seed in the back of my mind. Just another thing Im going to have to help get myself over.