Not much going on here in Virginia. We had some interesting weather this last week. One day we had winds so strong that branches came down in the area. Thankfully we didnt lose power. The winds were roughly about 50+ mph. A couple of days ago we had rain that swiftly turned to ice because a cold front came in right in the middle of the storm. Unfortunately we were caught outside in it. By the time we got back to the apartment the sidewalks were slicked over really well. Let's just say it was so icy...that it took me 5 minutes to get the the staircase to get to my apartment. The stairs are like 2-3 steps away from the parkinglot, and the sidewalk I had to cross to get them is slightly slanted towards the street so it's a slight uphill walk to them. Needless to say with my bad knees the step up to the sidewalk is a bitch on a normal day. Hubby had to get on the grass and pull me up onto the sidewalk so I could get to the grass and then we spent a minute or so helping a neighbor over in the same way. Thank goodness the stairs are sheltered from precipitation (unless it comes in horizontally, then we're fkd).

Found another great restaurant a couple weeks ago. We've been there twice now. It's called Glory Days Grill. The Tuesday before we tried it out for the first time. Timing is an issue with the place as it doesnt open until 4pm and usually we like to catch lunch around 2-3pm and generally eat out then. By suppertime (around 8pm for us), we've got all our running done and are at the apartment. The food was great though and service was awesome. We noticed (after we put the order in that Tuesday was a ribs special ...well damn. So we went last Tuesday for the ribs special. The ribs werent bad but they werent exactly the best either. Chilis and TGIFridays have the best. Well honestly Tony Roma's has the best but I think they've mostly closed down. Now THAT place knew how to do ribs...and the warm wet napkins they brought so you could wipe your face and hands with to clean up afterwards..? Heaven. 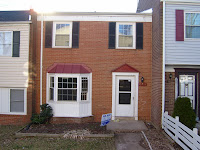 Hubby and I are getting antsy to get into our new place. It'll be nice to finally get into some semblance of normalcy for a change...if you can call this schedule normal. LOL. At least I wont have 3 flights to climb up and down daily, just the one to get to our second floor. Plus we'll be near some shopping and sidewalks so I can get out assuming the neighborhood is any good to be walking in alone...not that it matters as we're there for 2 years. Good thing is the lease is signed for 2 years which I believe means the rent cannot go up in that time frame. Here's a picture of the outside of the unit. I'll be taking more pix once we get in. Hubby took some of the backyard too that I can post later. It's not a really big yard but definitely larger than some of the patios you see with apartments. We dont need much of one, just enough to let Katy work off some of her energy. It's gated too so I can pretty much put her out and not have to worry about her leaving the yard.

Oh and we were out to Applebees the other night. It took them 20 minutes to get a waitress to our table. Talk about starting to be upset. Thankfully the floor supervisor managed to get to the table before my temper actually got flaired and apologized for the delay, they were a bit short staffed. However, since it took so long to get to us he was offering free appetizers because of the wait. Well since we were getting the 3 course special...we ended up getting both appetizers, both desserts and one of the meals in it's entirety free. The entire meal cost us less than half that what we normally spend there on a date night. Awesome.

I have about a third of my needlework piece done. With any luck I'll have it done in a couple months.LOL! I really should grab another pic of it but I think I want to get the next section done before then. I could be doing that while Im sitting here in chat listening to the tunes and watching Stargate Atlantis so maybe I'll close this out now and do just that.
posted at 2/15/2008 09:47:00 PM

The outside of your new place looks cute. Can't wait to see the inside!

Last time I heard, I thought there were still Tony Roma's in California? Of course, that doesn't help you, in Man Asses.

Thanks. It is really nice for the price we're getting it at (damn near a steal). For the same size space in any of the apartment complexes, it would have cost us at least 30-50% more. Some ONE bedrooms are running as high as $800+ here and a 3 bedroom....damn well forget it as most start in the $1300's (yes...per month). That's the disadvantage of living in the bedroom community of a major city.

As for the Tony Romas...looks like they have them in several states around us including MD. Im thinking it'll need to be a treat when we go to TN as there's one going into Pigeon Forge soon. YAY! I see Louisville, KY too...means I'll need to make more trips out to see my brother.

I hate waiting at a restaraunt. I think I would have just left after about 5 minutes after making a mess of the table of course :-) If I got to sit and figit I shread paper napkins and what not. The ones that kill me ae the places that are empty and take 5 minutes or more to decide where to sit you, ugh!

Nice place! you will be in there soon and make it your home :-)

I usually do iggy and I dont leave quietly either. This time Im not sure why I stayed calm as long as I did. Glad I did though.

Don't worry, you'll soon be in your new place and turning it in to a home. I think Katie will be pleased with her little yard too. :)