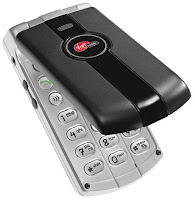 Saturday and Sunday we didnt do too much around the apartment. Mostly just watched tv and worked on the computer. Well, he spent the time on the computer while I worked on some needlework. Yeah, I know I still have to take a picture and show ya'll how far I've gotten with it.
Monday I got a rather unexpected call on my cell phone (which looks just like the one to the left only it's an awesome shade of purple). It must have come in while I was sleeping because in the afternoon I heard it chirping at me that I'd missed a call. Mind you, this phone still has a Dallas number attached to it because we wanted to get into the new place before changing it. Guess what the message was? The message was from Lane Bryant's in regards to an application I had filled out online for a job. heh heh heh. *shakes head*. The message said if I was still interested they'd love to interview me as they had full and part time positions available in their store. Well I called them back and let them know that although I'd LOVE to interview and take a job with them that it would be impossible now as I was in Virginia. *shakes head again* Maybe it's time to change that phone number....

Not much else is going on. They keep promising us snow but all we get is cold while everyone else around me gets that beautiful fluffy white stuff. *sigh* So Chicago, when should I expect that shipment of it? I know you've got plenty to spare. I'd ask Alice to send hers as well but I know Tori's wanting some across the pond so I wont be greedy. 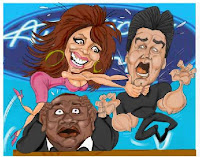 My goodness did we all catch American Idol this week? What a freaking waste of time that was. If it had been a movie , I would have demanded my money back for sure. Usually by now I have the field narrowed down to a couple worth watching, but not this year. There are a few that bear watching but none that really stand out. My original prediction (before the season started) was we'd have an AAM as a winner but there are a few girls out singing him easily so Im not too sure at this point. Another pattern emerged while I was looking at the past winners...and ya know we're due for a white female with an awesome voice again. A winner, like Kelly Clarkson and Carrie Underwood.
Around 430pm today we're due to go for our walk through on the townhome. I plan on getting the non-essentials packed up this evening when hubby goes to work and the rest on Saturday. I figure I'll just leave a couple days worth of clothes and the meds here and take them over when we go on Monday morning. I guess I'd better get myself to bed a little earlier this morning so Im better rested for the walk through.

Good luck with the move!

Hope it goes smooth and snow-free (at least until you are moved in)!

Yeah I watched Idol...I can't even remember their names!!! sad huh? I really like that Chikezie (is that right?) I like his voice and his performance. *shrugs* I never really got into it so......
Yeah its just like jobs..when you want one they aren't there. But not be wanting one and they all call you wanting you to work! LOL

I thought you didn't watch Idol once it got to the real competition stage, Karla? LOL

I hear Lainie has some snow on the way, Styxie. Maybe she can divert some to you.

~smiles~ Karla....that's why Im nerd enough to take notes ;). *laffz* @ the job comment. Worse yet is when they chase you from out of state!

*does the snow dance for Lainie's area so a shipment of the nice fluffy white stuff can be shipped south!!*

How'd the walkthrough go? At least for THIS move, all you have is what you fit into the truck to pack up. Everything else is still packed and just needs to be un-packed. Can't wait to see pictures once you get settled in!