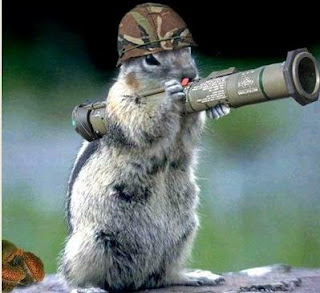 In anticipation of the pesty guy's arrival, Bushytail and Nutkins made sure that all the Chipmunk-Guard was armed to their little buck teeth. They couldnt chance his escape, not now, not when they were so damned closed to their goal. Justice would be had and until the pesty guy was charged, sentenced and safely tagged for further monitoring, they wouldnt be leaving anything to fate. Ok, so the bazookas were a bit of overkill, but they had to be sure everything went according to their plans.

Pesty guy arrived, heavily guarded by several hundred Chipmunk-Guards and the charges were read. The complaint had been filed by Bushytail, Nutkins, Cuzin Chuck, Cuzin Chippy, Chuzzelwit and the rest of the Squirrel community against iggy aka Rocky aka Pesty Guy for damages for the following charges:


stalking & harrassment of all things orange, fuzzy and flying
the wrongful deaths of Lil and Tiny Bushytail
and the rustling of unnaturally colored sheep

Slappy reviewed all evidence and Pesty Guy was found guilty of all counts. He was fitted with an ankle monitoring device. His sentence was to do another Virtual Walk, this time in the United Kingdom. His main contact there shall be Tori. When he groaned, it was pointed out the charges could have been much much worse and the next offense would cost him a trip through Canada. Pictured below is the front page of the filing. 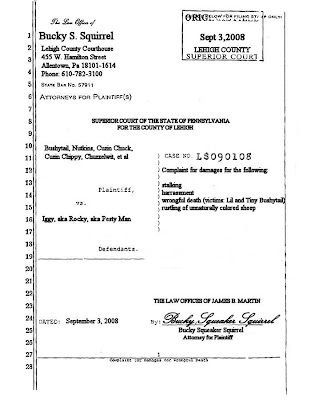 I'm glad I wasn't sentenced to Guantanamo Bay as an enemy combatant to be waterboarded. I'll gladly do the virtual walk. The groan you heard was me legs...

The 2,705 mile route of the condemned - Please give it a moment as it will take time to draw the map

I am laughing so hard, I am crying. Sure am glad pesty guy got a fair trial in a court of his equals with no bias whatsoever. LOL! That filing is too darn funny.

OOhh...nice trip...You forgot to add Leeds to the trip though. Gotta go there. A branch of my family hails from there. *checks Wiki* Damn that city looks like a two day trip at least!

And I believe Tori already advised the condemned that there are NO squirrels in Wales, correct?

*raises hand* One question....how does the condemned get to the United Kingdom?

He squirrel-paddles across the Atlantic? ~grinz~

LOL you sure he can't walk on water? LOL

There are Red Squirrels in Wales....

HOWEVER, the terms of my "walk-release" say I'm not allowed within 50 feet of a squirrel with a camera. Nor am I allowed to "sneak up" on them.

...but YOU folks can look at the Red Squirrel Web Cam in Wales

I'm taking the short bus to the UK.

So that means we just have to outfit all the squirrels with cameras then right?

Don't worry, Iggy. There may be plenty of squirrels here, but you'd never get close enough to hurt them (or even take a picture). They're one of the few things around here that actually believes in moving quickly. ;)

If you make sure to go see my Grandma while you're here, maybe you can get a nice hedgehog picture though... She has one that keeps coming in her garden, so if you wait quietly in her conservetory you shouldn't have too much trouble getting a photo (might want to have Grandma take Jayde out while you try for the shot though).