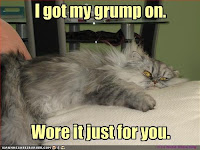 So yeah, I've been having a bit of a blockage issue here. Oh no, not THAT kinda blockage. Ew. No, I mean the kinda blockage that comes from something in your life happening and bringing you to a low point which brings on a funk that is so damn hard to fight. It makes it difficult to do the most basic of things, even just jotting a few notes down in a blog entry. Those that have known me for a few years know that when I get this way, it takes a while for me to work out of the funk. They've also probably noticed that it takes longer each time to "get back to normal". These same friends could probably tell you what things are liable to trigger bouts of depression or make them worse if I'm already there.

Takin' it back a month:

Everyone who's been reading my blog know that I've been working at losing weight. I've done rather well. My last unofficial weigh-in was about 2 weeks ago and I'm down to 260, a good 38 pounds lighter than when I started. YAY! Every week up until March 20th, I'd take those smaller jeans that I'd saved from that box of clothes that had been given to me... hold them up and say "just 5 more pounds and I'm sure they'll fit!" On Friday, March 20th, I put on my knit pants and realized they were much too baggy to be wearing out in public without looking like a pathetic slob. I picked up a pair of the black jeans I'd been waiting to get small enough to wear and decided to see how close to fitting in them I was. Imagine my surprise when they pulled right over my butt comfortably AND buttoned easily! Not only was I in a pair of jeans 2 sizes smaller but I also had this going on. I had alot of hope and joy in my life.

Saturday the 21st, I took a test to see if I could confirm if that was really happening. I mean at this point it was 4 weeks late and all. Imagine the disappointment when I found out that it wasn't the answer I was hoping for. Although there's still hope the test was wrong, right? Oh no. Not for me. Sunday came along with its own confirmation that it wasn't to be. Top that, a story hit the news that night (or was it Monday) that brought me to tears. The friends I've known for several years can all pretty much tell you that a story of this type is a very big trigger for a case of depression. It's a trigger because I've tried so hard for so long and gotten nowhere. Yet some others who seemingly have no problem, throw their blessings away like so much garbage. It really hits me deep in the core and makes me cry every single time about the total unfairness of it all.

I can't tell you how timely one of my friend's entries was. She posted, right about the same time this all was happening, answering a question she'd received via an email about how she managed to stay so happy in her situation when realistically she shouldn't be. Her entry brought tears to my eyes as she expressed how she truly felt and how tiring it can be trying to be happy for people when you cannot seem to manage to have a child on her own. For me, being around pregnant people can be a real problem and even as late as afterwards and upwards into the child's toddler years. It just makes me very sad (imagine how hard to find out each time my brother and his wife find out they're pregnant, been through this twice already). Knowing that we don't have the means (unless the insurance covers it) to do everything that entails invitro or even the other option of adoption, this is pretty much it for us. If it's not natural, it simply will not be happening. So now we're into the testing phases. He'll need to go first because it's less invasive and I'm sure a whole lot less painful. Then will be me if his tests come back fine. If his come back wonky, I won't bother testing as it won't matter at that point. The hardest part is not knowing if we can or cannot. I'm hoping once the tests all come back, I might get better with this issue... even if the tests come back with answers we didn't want to hear. I may just see about a therapist at that point if the answers don't seem to quell my thoughts on it. I mean realistically, if the tests say we can't, then it's not my fault and I shouldn't be blaming myself. Then again, I know me too. In anycase, thanks for posting that sweetie. Sharing what you did really helped to know that I'm not alone with those feelings.

Well, anyhow, shortly after that entry hit... another one got posted that was really kind of cryptic. Since I was already feeling low, this one hit hard because I automatically assumed it was done because of the comment I'd left on the first one's blog. I know now that it was simply just bad timing and that it had nothing to do about my comment. However, when it happened I felt kicked in the gut. I got the same feelings that I'd get with my now ex as he had a way of making me feel so very small. I'm so glad I held off and didn't post what I was going to around then. The damage would have been excessive, I'm sure. In the end, I was mad at myself for allowing those thoughts to come to my mind and happier for the person in question. I hope you got everything sorted, dear. And remember what I told you, don't ever let anyone make you feel that small.

Once I get into a funk with a blockage like this, it becomes increasingly more difficult to write the longer I let it fester. I don't write not because I have nothing to say, but more along the lines of I don't know how to word it so I'm fully expressing myself without being offensive to anyone else (been there before, didnt like it one bit). Plus, when I look at my situation from an outsider's viewpoint...my problems are so damn small compared to what others are going through, which keeps me from dealing with my feelings and just allows them to bottleneck up. Once I get myself over it, the flood-gates open and I'm able to write again which is good because all the other entries that need writing are just piling up behind it. I think I'm close enough to being over it now so you know what that means...several entries are on the way. I've got a couple of awards that need posting and a third one I've created to give out. I've got pictures over the last few weeks to share, new items that I've bought and a couple of gifts that showed up in my mailbox in time to start putting a smile back on my face.

It all made perfect sense. And other than the perfunctory $.02, all I can add is...

Made sense to me too - I hope you feel better really soon - being out of sorts mentally really takes the fun out of life.

I'm going leave a dime and clear my tab.

And congrats on the being able to get the "new" pants on!

I've kept watching for posts from you, and not seeing any, I had a pretty good idea you had hit a low. I'm sorry you have been going through this and am thrilled to hear you are raising out of the gloom. That's my 2 cents worth...

And... dayum! Two pants sizes!!! Congrats on getting into those jeans. You rock!

It made perfect sense, and I understand completely. I hope you get some answers from those tests. *Hugs*

Hope everything begins to sort itself out for you pretty soon. In the meantime, the cherry trees you're using as your background are making me happy!

As stream of consciousness as it was, I followed every emotion you're going through. I understand what it's like to have all these thoughts racing around in your head and not being able to get them to sit still for a bit so you can get them out to someone else. Writing always helps. Once they're out of you, they seem to weigh you down less.

And hey, maybe now that you've written this out you might have lost even more weight! Congrats ;)

Nice to see a post from you. I'll be waiting to read the others that have backed up before this one. (i have lots to post, too, but probably won't)

Congrats on fitting into those jeans. You are doing great with the weight loss. *hugs*

Your problems are yours, you can't compare them with others, we have no idea how they'd handle it if the problems were reversed, your problems are not small, they are just as important! And Congrats on the pants, I know that feeling! Though I have also had the, then they get too tight and I HATE that, so i want more THEY FIT ME moments too! (Please!) LOL

And I totally get your funk, I think you know I would. And it does get harder each time, it should get easier, you'd think but nope. And "don't know how to word it so I'm fully expressing myself without being offensive to anyone else" is SO spot on!! Words can be so hard to find when you are not okay.

I'm here for you, my friend:) It made complete sense to me too. Be gentle with yourself and know that you are loved:)

I wish you better days real soon. Keep the faith!

Of all the years I've known you it made perfect sense as to what you are saying. *hugssssssss* honey. Hang in there.

Made sense to me. Congrats on the pants size. Good job!

You'll come out of the funk soon.

By the way, have you tried taking Avlimil? I have PCOS and was taking that when I got pregnant with The Diva. My OBGYN said it put my hormones back into balance and that is likely how I got pregnant (I am supposed to be infertile). It's worth a shot and they are all natural herbs and such.