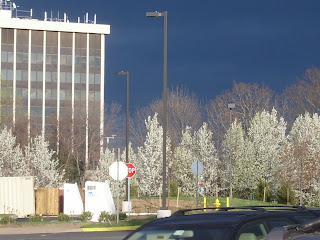 This pic and the one below were taken on the 3rd, I think. As you can see, we had some dark skies. There was some wind but thankfully no real storms. You'd think with as dark as it was, I'd be camping out in the half bath downstairs or in "Harry's Closet", but we didnt get much more than a light rain out of it. The above shot was taken while we were coming out of the dr's office. The one below is those trees near the mall. 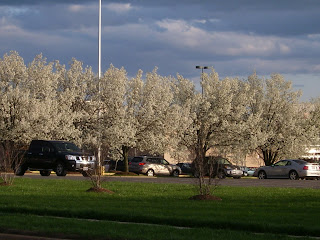 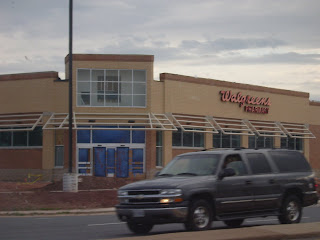 Even with stores going out of business around here. We still have some expansion going on. In the lot next to the Costco (and across from the mall area with the dr's office) , we've had 2 restaurants open (Chik-fil-a and Panda Express). This Walgreens looks like it's getting close to finishing up and there'll be 2 more smaller stores in the same area (one being a barber). 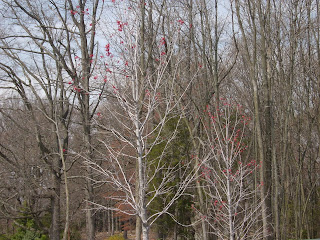 I saw this tree and immediately thought of The Blue Ridge Gal's post, Wildlife Hunkers Down and just had to snap it. I love how the barest red leaves just stand out against the green of the leaves behind it.
posted at 4/19/2009 10:00:00 AM

after living in Texas those clouds shouldn't of looked too threatening LOL The red leaves at the top of that tree make it look longing to rebud..I'm sure it won't be long before it does now!

We've had lots of dark skies over the past few days. I'm one of those strange ducks who loves thunderstorms. The first sign of thunder and lightning, I'm on the front porch with my glass of wine just watching in amazement.

From what Karla tells me, Punkn, she does the same thing. She says she has a padded closet all ready for me for when the tornado sirens go off while I'm there visiting, tho. I don't wanna see them. LOL

I can't wait until there is "life" on the trees again!

Karla: Those clouds in Texas had me running for a spot under the bed eerytime.

Punkn: I used to be like that until about a decade or so ago. I've already blogged the why so I wont go into it now. Unless, of course, others havent seen it. Then I may talk about it again later..

Alice: thanks! That's nothing though. You should see what Im getting now in the line of pix...

Yaya: as much as I'd like to see the leaves on the trees, they are yet another thing Im allergic to. Not as bad as weeds and grasses but enough to make me miserable.

While I know you enjoy the beauty of the blooming trees, I know how miserable they make you.

I've always loved a good thunderstorm. I used to sit in the carport with my dad and watch them roll by.

The windy weather this morning is starting to pull the blossoms off the blooming trees here.

Its been a great spring for the blooming trees...must be causing you reall havoc breathing.